Duany Plater-Zyberk, one of the leading planning firms associated with New Urbanism, is thinking about “sprawl repair,” a process by which utterly car-dependent landscapes could be transformed into something more walkable, and thus more resilient.  Galina Tachieva of DPZ has an article explaining the concept at Planetizen.

The only valid option is to repair sprawl – to deal with it straight on, by finding ways to reuse and reorganize as much of it as possible into complete, livable, robust communities. Pragmatism calls for the repair of sprawl through redevelopment that creates viable human settlements, places that are walkable, with mixed uses and transportation options.

As examples, Tachieva suggests turning a shopping mall into a complete mixed use town center, or dropping townhouses into the spaces between McMansions.

The ideas she presents are exclusively about the development parcel, not the street.  Clearly, though, such urbanized places will have dramatically different transport needs, which will also require re-thinking the standard suburban arterial.  Since government has much more direct control over the street than over the development parcels, we might move faster on sprawl repair if we focused on the arterial first, or at least at the same time.  Last month, on a speaking tour that took me to Portland, Fresno, and Los Angeles, I spent some time thinking about this issue.

The densified sprawl that DPZ envisions will clearly be a place that needs much more effective transit.  Parking will be more scarce and density will be higher, so there will need to be more transport options.  While cycling will take up some of that need, transit is still the most versatile sustainable transport mode for longer trips, the only one capable of delivering you from one place to another as a pedestrian, unencumbered by a vehicle.  And the only place to put that transit, in a classic sprawl landscape, is on that huge, government-controlled arterial. 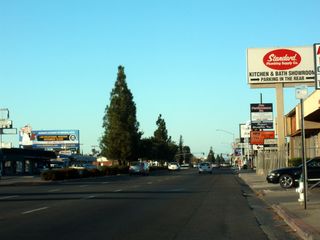 As I first discussed here, the ideal geography for transit is to have a series of transit destinations (dense housing, mixed use, jobs, activities, etc) located in what feels like a straight line, so that a transit line can connect all these points in a way that feels like a direct route between any two points.  The key challenge is to avoid slowing down or deviating too much to serve the intermediate points, as this makes the intermediate points feel like obstacles to anyone whose trip requires riding through them.

The classic suburban commercial arterial already does that, up to a point.  It gathers development around it without letting that development slow it down.  So we should be looking for ways to capture this virtue for transit.  A process of “sprawl repair” should start, perhaps, with a series of steps aimed at repairing the arterial, starting with the realisation that the arterial’s straightness and speed become an asset if transit can operate reliably.

Fresno is an interesting example because it’s at a stage where it could look at what’s happened to bigger sprawl-cities and choose another path.  There’s not much congestion yet, partly because the city has a truly massive road network.  For a metro area of about 1m people, Fresno has three north-south freeways, one east-west freeway, and a complete grid of very wide arterials spaced about 800m apart (the ideal spacing for transit).  There is no shortage of road space for introducing new approaches to transport, and as anyone involved in struggles over bus lanes in big cities will tell you, the time to create transit priority, bike lanes, and other reassignments of road space is before the street is badly congested.

If and when California High Speed Rail opens, Fresno is going to boom.  With the Bay Area and Los Angeles suddenly less than two hours away, Fresno will be a perfect base for any kind of business that aims for a statewide market.  It will attract good employees who value affordable housing and outdoor recreation.  (Yosemite and Kings Canyon National Parks are both within an hour’s drive.)   If HSR were there today, and I were considering setting up a consultancy aimed at a statewide market, I’d consider living there myself.

What if the city prepared for that now by planning for the inevitable future of its abundant wide arterials?  What if Fresno’s leaders went to the people and said:  “Look, HSR is coming, and our city is going to grow and change, mostly for the better.  We can resist the change or we can get out in front of it.”

Well, you wouldn’t start by proposing to build townhouses in people’s back yards.  You’d start by saying: “Look, even if we boom horizontally, tearing up orchards to build more subdivisions, we’ll still become more and more congested; just look at Sacramento or Las Vegas.  Eventually, we’d end up like Los Angeles, struggling with congestion that chokes the economy and constrains people’s lives.  And then, we’d be desperate to get people on transit, as Los Angeles is now.  But by then, we’ll have filled up our arterials with congestion, so the remaining options for building transit will be really expensive.”

“What if we learned from Los Angeles’s path?  Instead of waiting until it’s really expensive, as Los Angeles did, what if we take early, gradual, inexpensive steps to make our arterials safe and attractive for transit?  That doesn’t mean ripping up our single-family neighborhoods, but it does mean rethinking our arterials so that they’re safe and attractive places for pedestrians and provide appropriate levels of priority to transit.  We don’t need transit to be attractive to everyone, we’re not ‘forcing’ people to use it, but it could attract people who already want alternatives to driving.  Let’s face it, a lot of our citizens are struggling on low incomes and cars are expensive.  Many families would experience sudden improvements in wealth if they could get rid of one or more of their cars.”

“So we need to gradually repair our sprawl.  That doesn’t have to mean big increases in density.  We’d build some denser centers for people who want a more urban life, but we’re not going to build townhouses in your back yard — or at least not until you and your neighbors want us to.  Mostly, we just need to stitch things together so that people can walk and cycle more safely, both to complete local trips and to get to transit stops.  It means making sure that at every transit stop there’s a protected way to cross the street; you can’t use transit for a round trip unless you can use stops on both sides of the street.  It means adding pedestrian links to cul-de-sac neighborhoods, so that they are through-routes for bicycles and pedestrians while remaining cul-de-sacs for cars.  It means making sure that the design of bus stops and transit priority conveys a clear message that transit riders are valued as citizens and appreciated for the contribution they make to a sustainable and functional city.”

Such a pitch would need to be aimed at the practical concerns of life in a car-dependent city.  It will sound compromised and wimpy to a big-city transit advocate, but that’s not who it’s talking to.

As part of my presentation for Fresno Council of Governments, I picked an arterial intersection pretty much at random and quickly pointed out all the obvious, inexpensive opportunities for sprawl repair — not just repair of the land use, but of the streets.  Here’s the intersection of Kings Canyon Road and Peach Avenue. 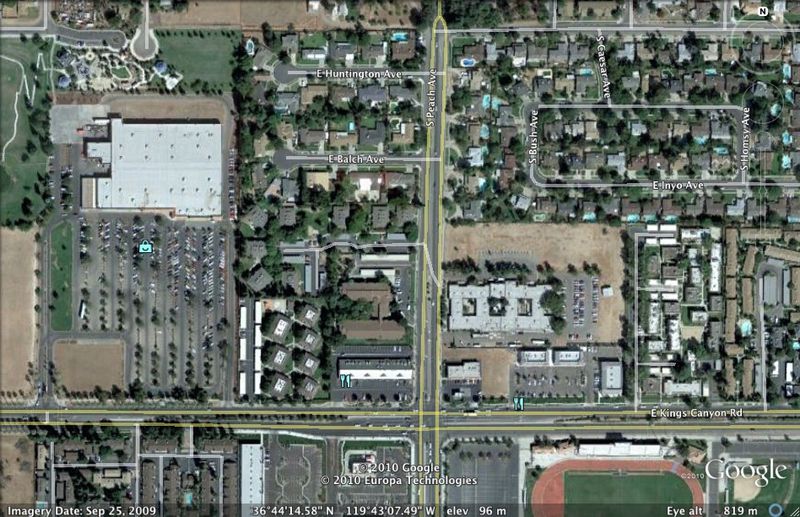 There’s a lot to work with there.  There are already quite a few apartments, but they tend to open out onto arterials far from places where you can cross those arterials safely.  But that could be fixed over time.  With the existing development in mind, you’d identify permanent bus stop locations each of which must have a safe street crossing opportunity.  That could mean new pedestrian crossings, signalised as necessary, which could also be combined with other accesses.

Look, for example, at the southwest corner of the image.  South of the arterial there’s a patch of apartments with several possible points of pedestrian access to the arterial.  Across the street to the north is a WalMart behind a huge parking lot.   When WalMart redevelops, of course, you’d want the building brought out to the street with parking behind it, but for now I’m thinking shorter term.

So I’d start by observing that if I signalize the WalMart entrance at the far west edge of the image, I’ve also signalzed a pedestrian access point to the apartments on the other side of the street.  I’m about 400m west of the main arterial intersection, so if there’s a bus stop at that intersection (as there must be, because it’s a connection point) then I can put another bus stop right here.  So a signal there will have three uses: (a) controlling the car access to WalMart for safer egress, (2) providing safe pedestrian access to the apartments, and (3) providing the safe pedestrian crossing that the bus stops require.

Once you notice this, you notice that, in general, Fresno is a grid of arterials spaced 800m apart.  That means that for local service, where 400m spacing is about right, you’ll have stops at the arterial intersections and then one more stop midway in between them.  Although 400m stop spacing is ideal, we can slide this intermediate stop 100m one way or the other to find the best site for a pedestrian crossing, based on the development and access points that are already there.  We can then use this crossing as a focal point when redevelopment opportunities arise on the surrounding parcels.  Over time, we’ll build a more connected network for walking, cycling, and transit, without seriously obstructing road traffic.

So some principles of arterial “repair” would include:

I could also add more subjective values, such as …

… but we should pause before we go too far in this direction.  If we add too many design requirements that are derived from urbanist ideals, we can quickly lose focus on the reality of what the street is today, and the level of improvement that’s needed to achieve basic safety and functionality for alternative modes.  We also risk spending so much money in one place that we can’t scale our improvements to the vastness of the sprawl that needs repairing.  So when I look at a typical street intersection in typical sprawl fabric like Fresno’s, I see first of all a need to create a basic pedestrian+transit infrastructure that will provide a safe and functional transit option for getting around the city.

Once, long ago, when I was presenting a transit plan to an outer-suburban council, a council-member said: “So if we spend all this money on transit, is that going to make me leave my BMW at home?”

The answer, from a “sprawl repair” standpoint, should be:  “No, and it doesn’t need to.  Most people don’t have BMWs, and many of them struggle to afford a car at all.  These improvements are focused on people who are near a decision point where transit could be a rational choice for them.  That’s why our priority is basic safety, functionality, and civility.  We’ll incorporate quality design wherever we can do so affordably.  But our first focus is on improvements that will scale to the size of the problem.  And there’s a whole lot of sprawl to repair.”

Portland: Now, the 1970s Need Historic Preservation
The Horrors of “Transferring” in 1974, and a Happier Future

You are here: Home › Transit’s Role in “Sprawl Repair”