It's now been about two months since Houston METRO implemented their New Network, developed through a process called the System Reimagining.  The first ridership numbers are in, and some could be misread as cause for panic.  In fact, they're exactly what we'd expect.  So let's take a deep breath and have a look:

First, let's remember what thew New Network did.  The changes did three major things, without increasing the operating budget by much:

We now have the first ridership data, in the form of a report comparing ridership each month to the same month a year before.  Since the New Network was implemented in August, the first data showing the impact is the comparison of September 2015 to September 2014.  Here it is, from METRO's monthly report.  Note that the "METROBus – Local" is the category of service dramatically changed by the redesign. 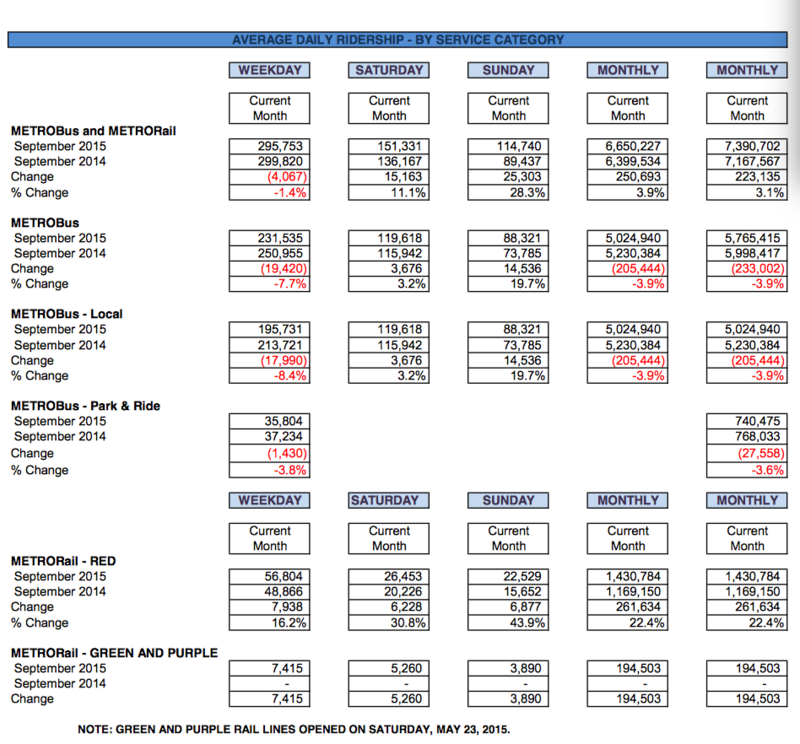 Rail is soaring, but look at the buses!  Red ink!  What's wrong?  Were the consultants fools?

Not at all.  This is exactly what we'd expect.  In fact, it's consistent with the New Network having a positive impact on bus ridership.  Here's why.

First of all, ridership is surging on weekends, especially Sundays.  That's because we grew weekend service dramatically and made it simpler.  Local service levels are now essentially the same seven days a week.  (The only exceptions are the weekday rush hour period, when they're higher, and that weekend service starts a bit later.)  We knew that weekends were a huge area of suppressed demand that could be tapped at low cost, and we were right.  The weekend ridership growth in the first month is especially gratifying, because ….

We Always Expect an Near-Term Drop

When the Houston METRO Board asked me for an educated guess of ridership impact, I said +20% after two years of well-marketed operation, and net of the impact of other events.  This was simply a very educated guess based on my experience.   However, if you prefer modeling, I can offer that a run of the regional model later came up with the same answer.

It's commonly observed, in our business, than when you make any big change, you may get a downtick in ridership in early months, even if the longer term path will be positive.  Humans are incredibly habit-driven beasts, and it takes time for them to see new opportunities.  Also, the most profound and transformative impacts of  a frequent network happen as people start to make location choices in response to it, so that frequent lines come to be populated by people and businesses that value transit.  None of that happens in the first month, but a fair bit is starting to happen in two years; the bigger payoffs, of course, are even longer term.

Other Things Happened to Cause a Drop

So a first month downtick is exactly what we'd have expected.  Am I surprised that the local bus ridership is down 3.9% overall.?

No, because of three other things that happened during the same year, from Sep '14 to Sep '15:

Let's look at those in detail.

That's our cue to look for other things changed during the year from September 2014 to September 2015 that would affect ridership.  The obvious culprit?  A spectacular fall in oil and gas prices.  This probably had two effects:

So we should have expected a ridership drop regardless of the New Network.  Again, it would be great to correlate the P&R ridership losses with downtown job losses.

Impacts of Light Rail I: Direct Replacement of Crowded Buses

When rail is introduced to replace a very busy bus line, of course the high bus ridership becomes rail ridership, and you should expect total bus ridership to go down.  That doesn't mean buses are failing; it means they succeeded so well that a higher-capacity transit technology was needed, and they handed off their role to that new technology.

Two new light rail segments opened in the year under study.  The Green and Purple Lines, both oriented toward the southeast of the city, opened in May 2015.  These obviously caused a shift of bus ridership from buses to light rail, as they were expected to.

One of these, the Purple Line, replaced a very high-ridership bus corridor, the link between downtown and the giant University of Houston.  (The smaller Texas Southern University is also tangentially served.)  Universities are ferocious engines of all-day, all-week ridership.  This alone would have caused thousands of riders to shift from bus to rail, causing a bus ridership drop and rail increase.*

Another reason to expect bus ridership to drop and rail to grow is that the New Network deleted bus services that compete with light rail.  Some of these right alongside the Red Line through the densest parts of inner Houston, inevitably drawing some passengers from rail for various reasons.  The New Network also introduced bus-rail connections for what had previously been bus-bus connections.  Every time you do this, bus boardings turn into rail boardings.  That's probably a big part of the ridership growth on the Red Line, since this line did not change during the 2014-15 year.

Did we Increase Transfers?

An internal frustration of American transit statistics is that rely so heavily on counting boardings, when what everyone cares about is completed journeys.  When you transfer, you are two of the former but only one of the latter.  If we increased transfers, that would suggest that the drop is even worse that the numbers make it appear.

My sources tell me that a preliminary look at this suggests it's a non-issue; the amount of transferring looks about the same as before.

We made a big deal about how the New Network would require and encourage more transferring for some existing trips.  That statement was to manage the expectations of existing riders, but it doesn't mean we expected transferring to rise, and it's great to hear that the rate is about the same.  After all, the New Network also eliminates many potential transfers for trips to non-downtown destinations, and the grid replaces many two-transfer trips with one-transfer trips.

To Sum Up: The Network's Impact is Probably Already Positive

A downtick in ridership right after a major service redesign is routine.  Because humans are so habit-driven, people who find the new network less convenient disappear as riders while the vastly more who will find it more convenient take some time to figure that out.

I would not have been surprised at a drop of a few percent.  Indeed the total drop in local bus ridership, counting the weekday drop and the weekend surge, is under 4%.

But when we remember the  other things that happened:

… I don't think we know that any of an 8% drop in weekday bus ridership can be attributed to the New Network.  And compared to what we expect one month after implementation, that's a rousing success.

Seattle: Before the Live Debate, the Written One (and an Imptertinent Question)
Weekend Ramble: Empathizing with the Fear of Urbanism

5 Responses to Houston: Great Ridership News on the New Network

You are here: Home › Houston: Great Ridership News on the New Network