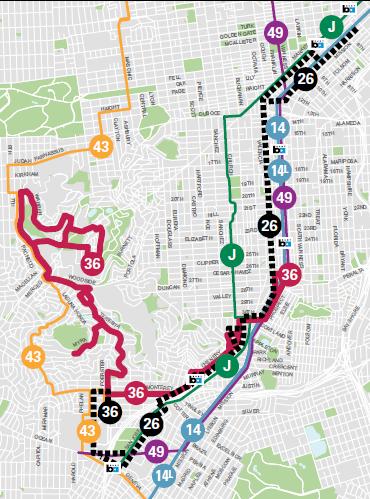 In the last post, commenting briefly on how some San Franciscans were lamenting the deletion of the uncrowded and redundant bus line 26-Valencia, I compared the 26 to a restaurant ….

As always, the danger of fast posting is that you end up with comments that are much smarter than the post.  Commenter Spyone, for example, explained some of the economics of the restaurant business.

In transit, the vehicle itself is the service provided to the customers, and (to a limit) additional customers do not increase cost. In a restaurant, a tiny fraction of the customer’s bill pays for his chair.  Due to this fact, a restaurant actually operates best if it is rarely full. The extra chairs represent emergency capacity (for special events and the like), while it is the staffing that is adjusted to meet
projected demand.

Which oddly leads me to realize on of the major problems with creating a frequent network: in most transit systems, staffing is per-vehicle rather than per-passenger, so it is more cost effective to serve more passengers by using bigger vehicles rather than more vehicles. If frequency is your goal, the opposite is what you want: more vehicles (possibly smaller vehicles if that represents any kind of savings) running more often.

In both restaurants and buses, what matters is not the crowdedness of the space but the ratio of customers to employees, because at least in the high-wage developed world, the employees are the dominant element of cost.  The attentive service good restaurants provide is the result of getting this ratio right.  In most transit in the high-wage developed world, the right ratio of passengers to drivers is “as high as possible up to the limits of civilized comfort,” which is admittedly an elastic and culturally determined limit.

The dominance of labor in transit’s cost explains why there’s so little money to be saved by running smaller buses in areas of smaller demand.  I’ve met many small-bus proponents who talk as though we could just chop all our big buses in half and have twice as many small ones, but alas, it doesn’t work that way.  Small vehicles may be marginally more fuel-efficient and offer a more intimate look-and-feel, but these are small factors compared to the constant cost of labor.

I’ve seen plenty of uncrowded restaurants that have stuck around for years.  To amplify what Spyone wrote, one difference between restaurants and buses is that a popular restaurant is able to raise its prices to both reduce crowding and compensate for the revenue lost. If your demand curve runs the right way, you can often make more money serving less customers.

In fact, the express buses here in New York cost $5.50, more than double the regular $2.25 fare, and they rarely have anyone standing. It’s my understanding that they’re still subsidized, but less than they would be if they were $2.25. On one level it would be best for the agency if every route – or every itinerary, or even every trip – had a different fare based on the supply and demand. Of course, it would also be confusing and frustrating to the passengers, and probably wind up driving more business away.

Actually, I explored that idea in a thought experiment, here.  What if fares were inversely related to crowding?  We could endure crowded conditions for a bargain, or pay more for more space, just as we do on the airlines.  It’s actually possible to imagine, with the next generation of smartcards, a fare system where fares varied in real time according to how crowded the vehicle was.  Essentially, you’d be charging for transit the same way you and a few friends might pay for a ride you take together — by splitting the actual cost among you.  I’m not recommending this, but I do recommend thinking about it as a way to broaden your notion of what fares can do.  The Cap’n goes on:


Whenever I hear about a route being eliminated, though, I always worry that it’s a self-fulfilling prophecy, or at least a vicious cycle. Who wants to bother waiting around for twenty minutes if you can walk a block east and get a bus in five? It makes me wonder: what if they ran that route every five minutes for a month? If people knew that the route was going to be frequent and dependable, would they start really using it?

Often, a route that does something unique in the network may fail because it was never run frequently enough, but the 26-Valencia, which was only a block from parallel service on Mission St., was not one of those.   Yes, you might have saved the service by investing massively in it, but that wouldn’t have changed the fact that the Valencia and Mission markets are mostly overlapping, so you’d have ended up dividing the market between these two streets, yielding a much less efficient network.  The most efficient network gives you one line that goes the direction you want to go, and then runs the greatest possible frequency on it, including a mixture of local-stop and limited-stop service if the corridor is long, as Mission is.

Pantheon, meanwhile, was curious about why a bus route engages such feelings of attachment, even among people who admit they didn’t ride it much:

Following the links in the Streetsblog article, one comes across a page of tributes to the 26 which read like obituaries for a dearly departed loved one. Here’s a taste:

“I’ve lived a half-block from Valencia for well more than six years now, yet I can count the number of times I’ve ridden the 26-Valencia on 1.5 hands. It’s almost always a foggy ride, not due to the weather, but more to how much liquor I’ve imbibed. Or sometimes, it was simply the amount of warm pizza in me, and with the wind-chill factor factored in, and the randomness of a 26-Valencia magically showing up to cart my friends and loved ones on down the avenue to the safety and warmth of our homes …”.

I think this illustrates the deep emotional attachment people develop towards bus routes. Once established, they become part of the urban fabric. They are almost like a kind of mobile architecture. And if taken away, you miss them the way you would miss a grand old building that was destroyed to make way for a parking garage.

One of the joys of life in a big city is that anything, even a bus line, can be a gateway to associations and memories,  like Proust’s madeleine.  Pantheon goes on:

Here’s hoping the residents of Valencia can recover from their loss, perhaps heal their sorrows with some liquor and warm pizza, and enjoy the short walk home.

I’m sure they’ll be fine, because the walk from Mission to Valencia is very short indeed.

You are here: Home › Doggie-bags from Overtaxed Restaurant Analogy