Posted on February 5, 2010 in Privatization

Tony Judt has a fascinating piece at New York Review of Books on the ideal of social democracy manifested by most European governments: a democratic state with relatively high levels of taxes and government services.  Writing from a leftist perspective, he worries about the recent rise of economic analysis as a primary basis for government decisions. This trend, which he traces to Margaret Thatcher, has shaped the thinking of a generation of bureaucrats, not just in Britain but throughout the Commonwealth and also in parts of Continental Europe.  It’s almost universal in the British-derived cultures of Australia and New Zealand, where I work now.  Here, it often seems an idea about transit counts for nothing if it can’t be expressed in terms of “Cost Benefit Evaluation” (CBE) and “Key Performance Indicators” (KPI).

To strip the difference down to its essence: An American transit bureaucrat will tend to describe a high-ridership transit service as “successful.”  A typical bureaucrat in the British-derived world will tend to describe the same service as “profitable.”   The British view sees riders as fares, and see the entire enterprise on the model of a business.  In the British view, government’s role in transit is that of a “regulator,” the impassive umpire of a fair fight between, for example, train companies and airlines, or between subways, buses, and private cars.  From what I’ve seen in Australia, British-derived government thinking seems perpetually confused about how to reconcile this “regulation” function with environmental and social imperatives that require government to champion public transit, and to lead the way in major public transit investment.

Judt’s essay is especially fascinating for the transit advocate because it contains an extended discussion of how economic thinking has affected public transit.  Here is that passage in full, with some heckling from me along the way. What it illustrates, I think, is the degree to which even a leftist British-trained writer decrying economic thinking can be unconsciously trapped by it. 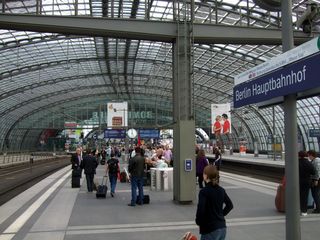 Imagine, if you will, a railway station. A real railway station, not New York’s Pennsylvania Station: a failed 1960s-era shopping mall stacked above a coal cellar. I mean something like Waterloo Station in London, the Gare de l’Est in Paris, Mumbai’s dramatic Victoria Terminus, or Berlin’s magnificent new Hauptbahnhof. In these remarkable cathedrals of modern life, the private sector functions perfectly well in its place: there is no reason, after all, why newsstands or coffee bars should be run by the state. Anyone who can recall the desiccated, plastic-wrapped sandwiches of British Railway’s cafés will concede that competition in this arena is to be encouraged.

But you cannot run trains competitively. Railways—like agriculture or the mails—are at one and the same time an economic activity and an essential public good. Moreover, you cannot render a railway system more efficient by placing two trains on a track and waiting to see which performs better: railways are a natural monopoly. Implausibly, the English have actually instituted such competition among bus services. But the paradox of public transport, of course, is that the better it does its job, the less “efficient” it may be.

Judt has swallowed Thatcher’s bait, which was thinly concealed in the economic lingo.  To say that public transport’s real “job” is to do inefficient things is to bow to Thatcher’s demeaning view of the whole enterprise as “social.”  (Judt quotes Thatcher’s famous remark: “there is no such thing as society. There are only individual men and women and families.”)  To rescue transit’s “social” role from Thatcher’s attack, Judt accepts that high-ridership services, by virtue of being “efficient,” are somehow not a valid area of public concern and can be left to the free market.

In fact, high-ridership transit services are almost always the result of aggressive government investment and policies, including the pricing of car travel, the planning of dense centers around stations, and a huge range of other actions.  A democratic government must care not just about the bottom line of the transit but also about the quality of the community it serves.  In this role, it may advocate low-ridership services to serve other sustainability goals.  For example, when opening a new “transit oriented development,” the long-term health of the community may require a lot of public transit service just as the first people are moving in, to help them establish transit habits, own fewer cars, etc.  This service will be “unprofitable” but can be a rational part of a long-term sustainability strategy.

Thatcher’s formulation, swallowed whole by Judt, is that service is either “profitable” or “social.”  Judt will go on to make “social inclusion” arguments for why service to low-ridership markets, such as rural towns, should be retained.  Fine, but he’s already given away the revenue that could pay for much of that service — the “profits” gained by the private operating company running the “profitable” services.  He’s also given away funds that could be used to fund new infrastructure investments for the next generation of profitable services — investments that should be government-funded not because they’ll be profitable, but because they’ll be intrinsic parts of a humane, sustainable, and livable city — all valid criteria for government attention.

A bus that provides an express service for those who can afford it and avoids remote villages where it would be boarded only by the occasional pensioner will make more money for its owner. But someone—the state or the local municipality—must still provide the unprofitable, inefficient local service. In its absence, the short-term economic benefits of cutting the provision will be offset by long-term damage to the community at large. Predictably, therefore, the consequences of “competitive” buses—except in London where there is enough demand to go around—have been an increase in costs assigned to the public sector; a sharp rise in fares to the level that the market can bear; and attractive profits for the express bus companies.

Trains, like buses, are above all a social service. Anyone could run a profitable rail line if all they had to do was shunt expresses back and forth from London to Edinburgh, Paris to Marseilles, Boston to Washington. But what of rail links to and from places where people take the train only occasionally?

Again, Judt’s voice is a plaintive wail from deep inside Thatcher’s conceptual trap.  He argues that government should subsidize trains that are lightly used, because of social needs there, but in dismissing the Boston-Washington run as “profitable” he seems to accept that government has no claim on the profits from lines that are heavily used.  Judt has unconsciously signed onto a plan to privatize profits while subsidizing losses, the classic “moral-hazard” or lose-lose situation that lies at the foundation of the problem of government.

No single person is going to set aside sufficient funds to pay the economic cost of supporting such a service for the infrequent occasions when he uses it. Only the collectivity—the state, the government, the local authorities—can do this. The subsidy required will always appear inefficient in the eyes of a certain sort of economist: Surely it would be cheaper to rip up the tracks and let everyone use their car?

No, but it might be cheaper to close some branch train lines and serve those towns with buses.  If you’re Hokkaido Railways, part of Japan’s state railway JR, you might even invent a rail vehicle that can turn into a road vehicle partway along its run, so that you can turn rail branches into bus lines without even requiring a connection.

In 1996, the last year before Britain’s railways were privatized, British Rail boasted the lowest public subsidy for a railway in Europe. In that year the French were planning for their railways an investment rate of £21 per head of population; the Italians £33; the British just £9.[4] These contrasts were accurately reflected in the quality of the service provided by the respective national systems. They also explain why the British rail network could be privatized only at great loss, so inadequate was its infrastructure.

But the investment contrast illustrates my point. The French and the Italians have long treated their railways as a social provision. Running a train to a remote region, however cost-ineffective, sustains local communities. It reduces environmental damage by providing an alternative to road transport. The railway station and the service it provides are thus a symptom and symbol of society as a shared aspiration.

But the key here is that the French and Italian governments — through their state-owned railways SNCF and Trenitalia — have allowed profits from high-ridership lines to fund further improvements that serve government policy.  This is not quite the same as a private business investing in infrastructure that will deliver future profit.   These government companies invest not just in “social-service” branch lines to small towns, but also in the next generation of high-speed rail capacity that will draw even more ridership (and more profit) from existing high-ridership corridors such as Paris-Lyon-Marseilles.  They understand, in short, that more riders are not just more revenue.  More riders are part of a government-driven strategy for pursuing a range of public goods: less need for roads, less need to expand airports, fewer accidental deaths, more compact cities, lower carbon emissions etc.

I suggested above that the provision of train service to remote districts makes social sense even if it is economically “inefficient.”  But this, of course, begs an important question. Social democrats will not get very far by proposing laudable social objectives that they themselves concede to cost more than the alternatives. We would end up acknowledging the virtues of social services, decrying their expense…and doing nothing. We need to rethink the devices we employ to assess all costs: social and economic alike.

“Social” and “economic” are just two legs of the three-legged stool that has come to be known the “triple bottom line,” a useful scheme for thinking about all of the possible valid outcomes of public policy.  The missing third term is “environmental.”  Judt is so attached to the “social” dimension of the question that the other two terms, “economic” and “environmental,” have collapsed in his mind into a single opponent, the “economic.”  We are all used to thinking in binary (us/them, this/that) terms, but the triple bottom line requires us to hold three points of view in the mind at once — which, to be fair, is much harder than it sounds.

We in the transit business have, perhaps, a distinctive perspective on this question, because our product serves both social and environmental goods.  We see in our daily work how these goods come into conflict, but also the many ways that they intertwine.  As the bumper sticker says, there are “no jobs on a dead planet.”  High-ridership transit is a tool for healing and sustaining cities, and its capacity to bring large numbers of people to central locations empowers not just the downtown economy but also the civic square, the arts, the tourism industry, the commons, all the distinctively urban experiences that happen only when people can come together, without their cars.

If we are to make visible the environmental and civic goods that arise from our work, we must never let them be concealed as profits, just as we must never allow ridership to be reduced to revenue.  There are plenty of roles for competitive private enterprise in our business.  (As a transit planning consultant, I’ve spent my whole career in the private sector.)    But the outcome of our work is a very public good.  Governments must invest in it, so governments have every right to take credit, and much of the “profit,” when it succeeds.

45 Responses to Privatized Transit and (or vs.) The Public Good

You are here: Home › Privatized Transit and (or vs.) The Public Good