The Sydney Morning Herald’s Indepent Public Inquiry on Transport published its final report yesterday.  I had a major role in the preliminary report, which I discussed here, but not in the final. 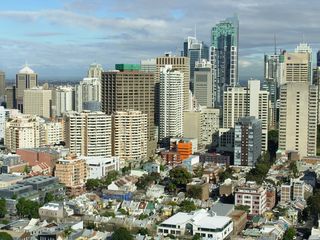 The Herald’s coverage today focused on the big controversy about what the next rail project should be, and also on the dangers of spread-out job growth.   But in my view, the Inquiry’s most important work was the discovery, through public surveying and financial analysis, that a comprehensive network of improvements — extending the old commuter rail network and also upgrading it to offer the frequencies of an urban metro — could be funded with a package of sources that a majority were willing to support.  All of these sources are politically radioactive if you just propose them in a vacuum:  Congestion charges!  Higher fuel taxes!  Higher property taxes!  Higher fares!  But if you package them carefully with the transformative improvements that they buy, you could win a referendum.

Aussies, however, aren’t in the habit of just throwing things on the ballot and voting on them, and watching the death-by-voter-initiative that’s crushing many US state governments at the moment, I appreciate this reluctance.  Unfortunately, Aussies are also not in the habit of creating semi-autonomous transit agencies that can drive a transit improvement program.  Funds for transit construction are mostly just items in giant state budgets, so it’s nearly impossible to tie a tax increase to a project — or even to transit in general — in the way that Americans are used to doing.

Fortunately, the Herald also picked up one of the most important quotations from the Inquiry’s fearless leader, Ron Christie:

”Sydney is held back by archaic habits that have grown from a widespread attitude of ‘avoid complaints at all costs’. Many of the steps that urgently need to be taken will arouse some opposition from people who are used to things the way they are. In common political parlance, there will be ‘winners and losers’.”

That really is the bottom line, especially in debates about transit, in just about every city I’ve worked in.  Cities that move forward have leaders who are comfortable with complaints.  In fact, they have leaders who are ready to risk the outrage of 45% the people, for doing something that just has to be done for the city’s future.  Sometimes,  as with Ken Livingstone in London, the balance tips and they’re thrown out of office.  But Ken Livingstone really did something.  He made the big hard choices — the congestion charge above all — that have put London where it is.  He can bear political defeat as proudly as Churchill did, his legacy secure.

Sooner or later you’re out of office anyway.  So why not do something?

You are here: Home › Sydney: The Transport Inquiry’s Final Report