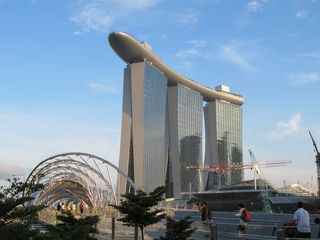 Singapore’s weekend Straits Times was full of debate about the recent fare system changes, which finally eliminated fare penalties for connecting from one service to another.

Eliminating these penalties is a crucial step in creating an integrated and versatile transit network, because (a) networks designed around connections are more legible and frequent than those that aren’t and (b) transferring is already enough of a hassle without these penalties.  The new system means that your fare from A to B will now be the same regardless of the path you take and the number of times you transfer.  This, in turn, will allow the transit agency to design a simpler and more reliable system.

To take just one example, many bus lines duplicate MRT rapid transit corridors, partly because fare penalities for transferring encouraged riders to stay on these buses instead of change to the MRT.  This was always silly from the transit agency’s standpoint.  Remember:  To get a rider to her destination sooner is not just good for the rider.  It’s good for the transit agency, too, because the operatings costs of transit are measured mostly in time, so a faster trip uses less of it.

However, like many (but not all) great ideas, eliminating these penalties isn’t free.   When you eliminate a fare penalty that is bringing in a certain amount of revenue, you have two choices: increase the base fare — which is a direct fare increase for people who aren’t transferring — or accept a drop in revenue.  Singapore’s transit agency did a little of both, and therefore got attacked from both sides.  The new fare system has been running for a couple of months now, and inevitable complaints about the fare increase (on passengers who didn’t transfer) are in full swing.

I’m impressed with the Straits Times coverage of this issue — to which I’d link generously if it weren’t behind a paywall.  The reporter actually understood the financial reality underlying the choice and explained why other choices might have been worse. The prevailing critique of the transit agency was not that they did it, but that they oversold the change as a fare cut.  In fact, it was a cut if you were already transferring and an increase if you weren’t, and they probably could have been clearer about that.

Still, this is a good move.  Singapore is in the early stage of rationalising its huge but confusing bus system.  This was an essential step toward making that possible.  When New York City eliminated bus-subway connection penalities in 1996, the result was a small jump in subway ridership and a huge jump in bus ridership.  I’ll be interested in seeing Singapore’s results.