In the midst of all the frequent-network-mapping fervor, here comes the Toronto Transit Commission (TTC) with a proposal for consistent all-day 10-minute frequency on a network of critical lines covering high-density parts of the city.  A frequent network map is already in the newspaper, but it remains to be seen if this brand will make it onto their system map, along the lines of similar brands in  Portland,  Los Angeles, Minneapolis-St.Paul, and Salt Lake City among other North American peers.  Anyway, here’s the map: 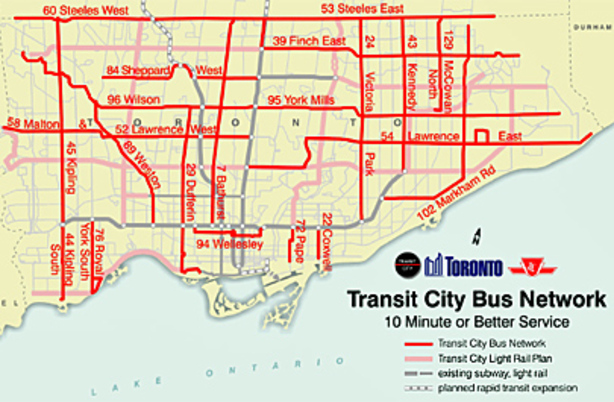 I like how they’ve shaded in the Transit City Light Rail plan in the background, to emphasise that the two proposals are compatible.

In the it-sounds-geeky-but-these-things-really-matter department, I also like the emphasis on naming the lines after the streets they run on.  If your city is fortunate to have long streets with a single streetname, this kind of naming helps people think of the transit line as an intrinsic part of the street itself — exactly the kind of simplification that we need if people are ever going to rely on their transit networks the way they rely on their street networks — not just as mobility tools, but as ways of organizing their idea of their city.  Several agencies I could name have street networks that make this possible but haven’t yet caught on to this idea (nor rationally refuted it, which would be fine too).

You are here: Home › Toronto: A New Frequent Network Plan