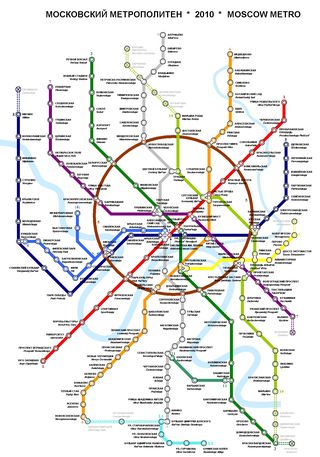 Frequent commenter Alon Levy found a glossy English-language PDF (part 1, part 2) from Moscow’s Metro, showing off the latest stations and performance statistics. He has a question about the Circle Line:

The circular line is not well-patronized by local standards. It ranks 6th out of 11 in ridership. Its problem, I think, is that its radius is too small; it was built as a reliever for the central radial/radial transfer points, but is not as useful by itself. This is different from the Yamanote and Oedo Lines and especially Seoul’s Line 2, which are really multiple lines joined together as a circle.

Do you think my explanation here is correct? Or could there be other factors why some circular lines work better than others?

First things first:  ranking 6th out of 11 in ridership is a meaningless statistic.  All that matters is ridership per unit of service (e.g. per train hour) if you want to evaluate the use of the service itself.  You can also talk about ridership per route km or per station if you want to evaluate the use of the infrastructure.  Ridership figures mean something only when compared to some unit of investment, or when compared to the same service in a different time period.  Transit lines are of vastly different sizes and scales, so the ridership on a transit line means nothing when compared directly to any other transit line.

As usual, you can find lots of cool maps of the Moscow Metro with a touch of Googling.  I like this one.  But the short answer to Alon’s question is this:  Wikipedia gives the circumference of the Circle Line as 19.3 km.  Let’s imagine for simplicity that the line really is an exact circle, and look at the geometry.

A circumference of 19.3 km gives us a diameter of 6.1 km.  So the longest one-way trip you could want to make on the Circle line is 6.1 km linear distance away, though via the Circle Line it’s 9.15 km (half the circumference).  Many of those trips, though, are served more directly by one of the many radial lines, most of which flow through across the city.

So note one geometric challenge of any circle line:  Nobody will ever want to ride more than half of it, because if you ride more than halfway around the circle, the trip would have been shorter if you’d ridden the line the other way.  By contrast, all of the radial lines of the Moscow Metro are useful for long trips as well as short ones.

This is actually a corollary of an even more basic piece of transit geometry, which is that if you imagine an area of even density, the transit line that will cover the largest area with the smallest number of line-km is a straight line, not a curved or bending line.  A straight line also has the unique feature of being the shortest path between any two points on the line, whereas a curved line is always longer than the shortest path.

So the Circle Line will never be ridden more than 9.1 km.  When it is ridden 9.1 km, it will be for the purpose of going a linear distance of only 6.1 km.  That suggests to me that with some armwaving, the dominant tripmaking on the Circle line is probably trips of 3-6 km.  (Less than 3 km, your trip is often faster via surface transit, or even by walking, because of access time at subway stations.)

So yes, successful circle lines (like London’s and Tokyo’s, and the one that Montréal is planning) are much larger than Moscow’s, so that even a trip around 1/4 to 1/3 of the arc of the circle is a fairly long corridor, usually 10 or more stations, which is the most direct link between all of those stations. On Moscow’s 11-station Circle Line, 5 stations is halfway around the loop, so you’re likely to be using the line to go only 2-4 stations.  That’s a pretty limited market for a single direction of a subway line.

And remember, this basic geometry is true of circular surface transit too, whether bus or rail or tram, though surface transit requires less access time than subways and therefore can be useful for shorter trips, thus justifying smaller circles.

You are here: Home › Moscow: Questioning the Circle Line