In his 2010 book Transport for Suburbia, Paul Mees notices a fallacy that seems to be shared by sustainable transport advocates and car advocates.  Both sides of this great debate agree that effective transit requires high density.

Sustainability advocates want higher urban densities for a range of reasons, but viability of public transit is certainly one of them.  Meanwhile, advocates of car-dominance want to argue that existing low densities are a fact of life; since transit needs high density, they say, there’s just no point in investing in transit for those areas, so it’s best to go on planning for the dominance of cars.

Mees calls on his fellow transit advocates to let go of the idea that good transit requires high densities:

The central argument of this book is that density is not destiny.  Transport policy itself has a bigger impact on transport patterns than urban planners have realized, and suburbs don’t have to be totally reliant on the car.  Planners who insist that car dominance can only be addressed by impossibly large increases in density may actually be entrenching the problem they are trying to solve.

Transit does depend on density, but there are three problems with saying that “transit requires high density.”

Mees is right that “density is not destiny.”  Cities of any density can make better or worse transit choices and achieve significantly different outcomes as a result.  But density is still an overwhelming force in determining the possibilities and outcomes of transit, and we can’t begin to make good transit decisions until we understand it.

Density is hard to talk about for two reasons:  It’s very emotional and it’s hard to define and measure.

The emotions are inevitable: Whenever we talk about urban form, people hear us making judgments about their homes.  I can stand in front of a group of citizens and talk about how a certain kind of development pattern implies certain consequences for transit, and thus for sustainability, and thus for civilization.  As we talk, it may appear that we’re having a thoughtful and educational discussion about good and bad design.  But some people in the audience have chosen to make their homes in the very development pattern that I’m describing.  To those people, I’m saying that their home is good or bad.

Once you hear that, you’re likely to have a strong emotional reaction that makes you deaf to rational argument.  On some level, consciously or unconsciously, you’re going to feel as though I’d walked into your own livingroom and told you that your decor is not just ugly but a threat to civilization.   We all feel defensive about home.

But emotions often hide inside things that look like facts, and density “facts” are a great example.  In transit arguments, people say things like “the net density of Toronto is ###/hectare,” because this sounds like a fact and therefore conveys some authority to their argument.  In reality, though, there are several possible meanings of “density” in that sentence, as well as several possible definitions of “net” and ”Toronto.”   Briefly:

So the statement “the net density of Toronto is ###/hectare” is really as subjective as the statement “I think that cities should have more open space, narrower streets, and should have single governments covering the entire urban area.”  Because each of those opinions can affect how you choose to define “net,” “density,” and “Toronto,” which in turn determines the number that you declare, with cold factual authority, to be the net density of Toronto.

At the core of Mees’s book, for example, is a table[1] that compares the gross residential density of a bunch of urban areas with the transit performance in each area.  The point of the table is to show that there’s really no relationship between the two.  Before we look at some fun facts from this table, remember that definitions are everything.  So in this case:

So with those cautions, here’s a taste of Mees’s scandalous numbers:

The density figures are calculated to shock.  Los Angeles is denser than New York?  Yes, that’s what happens when you average over a huge contiguous metro area.  Your own impression of “New York” is probably formed by the massed and soaring towers of Manhattan, but New York is a dense city surrounded by a lot of very low-density suburbs that are all included in this concept of “metro New York.”  Likewise, your stereotype of Los Angeles may be a ranch-style house with a big pool on a cul-de-sac, which implies a very low density, but in fact much of greater Los Angeles is four-story apartment buildings lined up for mile after mile.  Obviously, our impression of the density of a city is based on the part of it we choose to remember, or that we tend to see on television.  The average density of the whole urban area may be entirely different.

To me, Mees’s table proves that average density over a whole urban area is the wrong kind of density for understanding transit.   The impression you probably have of the densities of these cities is actually closer to the kind of density that matters.

Of course, what matters even more precisely is how much stuff is within walking distance of a station, so it’s not just density (the amount of stuff in a fixed radius) but the completeness of the pedestrian network.  A poorly connected pedestrian network can ensure that much of the stuff that’s within a 400m radius is not in a 400m walk.

Consider Las Vegas, which Mees finds to be denser than highrise Vancouver.  The Las Vegas economy is based on hospitality and entertainment, labor-intensive industries with low average wages.  So the city needs a lot of housing suited for lower incomes.  The Las Vegas way is to build utterly car-dependent apartment buildings on a vast scale, achieving all of the disadvantages of density with none of its benefits.  Consider: 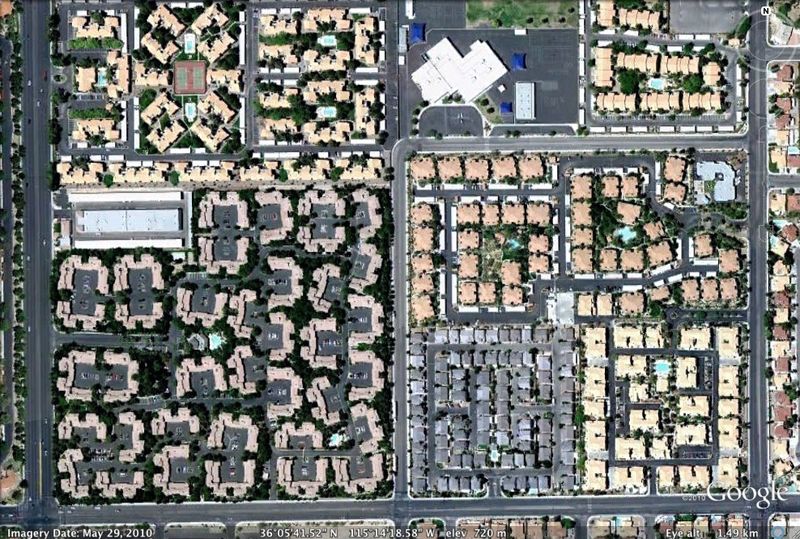 For scale, the width of this entire image is about 0.55 miles, or 0.9 km.  The arterials along the south and west edges of the image are the only streets straight and fast enough for efficient transit.  Note how these large apartment developments are soundwalled from most direct access to these arterials, and how the accesses they have tend to come out at points where there’s no controlled intersection, so the arterial is dangerous to cross.  (Two-way transit trips always require stops on both sides of the street, so if you can’t cross the street, you don’t really have access.)

So yes, Las Vegas has massive quantities of apartment buildings, which yield a high average density.  But at two levels of scale, these are deployed in patterns that make effective transit difficult.  On a macro level, Las Vegas is mostly midrise apartments spread over a large area, requiring transit to cover more distance to serve them; this is the most obvious explanation for Las Vegas’s low transit performance compared to highrise Vancouver.  But the micro explanation is important too.  In the details of street pattern and pedestrian circulation, typical Las Vegas urban fabric is designed for motorists and hostile to pedestrians.  Average urban density says nothing about either of these factors, even though they are what really determine the transit experience in each city.

It’s inevitable that in comparisons between cities, we’re going to hear average density figures.  These figures are better than nothing when it comes to making global comparisons.  The famous databases created by Jeffrey Kenworthy and Peter Newman, for example, are useful in showing how a range of sustainability outcomes vary with density.

But averages are dangerous, especially in transit.  Averaging sounds like a credible way to draw a simple fact out of a huge and diverse reality, but often, averages are just not the fact that matters.  In a recent post on the perils of average success, I pointed out that no transit customer really cares about average frequency, or average lateness, or average crowding.  By the same token, transit advocates need to be suspicious of average density.  What matters is the density around the transit system.  How can we best measure that?

[2]   In the US, “an ‘urbanized area’ is defined for each metropolitan region, made up by combining adjacent ‘census blocks’ (the smallest units for which data are collected) with more than 1000 residents per square mile, or 386 per square kilometre. …  Canada defines “urban area” on an almost identical basis to the US, using a density threshold of 400 [residents] per square kilometre.”  The data is from 2006 census in Canada, 2000 in the US.

Canberra: A Walk to the Office
Canberra: “They Only Refer to Buses”

31 Responses to The Perils of Average Density

You are here: Home › The Perils of Average Density