As Brisbane's great flood of 2011 recedes, the Brisbane Times has this roundup of the flood's impact on public transit:

CityCat and CityFerry services are out of action after the surging Brisbane River inflicted major damage to pontoons and terminals, but authorities have been trying to continue rail and bus services wherever possible.

If the river ferries are out for a while, it will be interesting to see how well buses take over their functions.  As you can see on the ferry map below, or on Google Maps, Brisbane is defined by a squiggly river with a spectacular shortage of bridges.  There are many bridges around the CBD but only three other bridges in the west and one in the east.  The big CityCat ferries that ran the length of the river mostly served markets also served by buses running along the shore, but the smaller cross-river ferries made some connections that will be vastly longer by road (Bulimba to Teneriffe, for example, in the city's east). 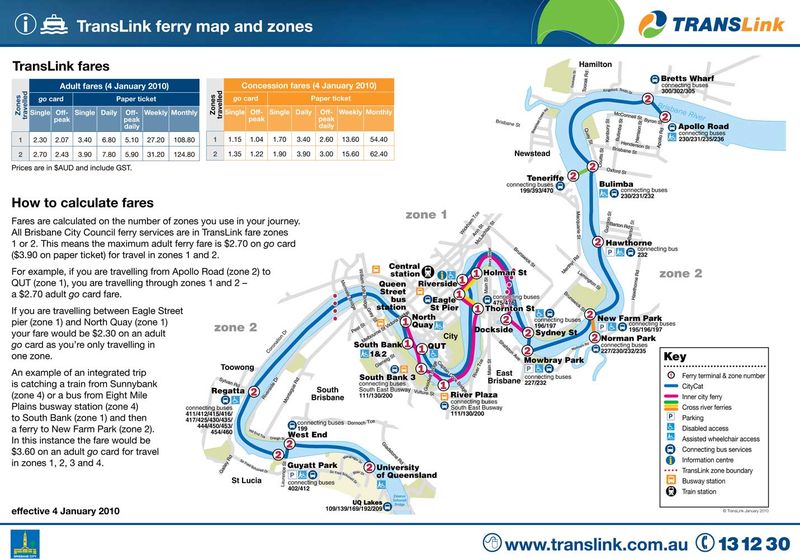 Perhaps this will give some impetus to the idea of "green bridges" — bridges across the river exclusively for transit, bikes,  pedestrians, and emergency vehicles.  Brisbane already has one, in addition to two bike-ped bridges.  Portland, a city much like Brisbane in many ways, is building it first.

From far-away Vancouver, Gordon Price shares his photos of some of what's been lost.

brisbane: the flood at its peak
redundancy in transit networks: a good thing?

12 Responses to brisbane: free fares for a week, ferries out of action

You are here: Home › brisbane: free fares for a week, ferries out of action