As I look at the new metros being built in the developing world, I'm noticing some striking connection-count problems.  Consider Delhi, a city I know a bit: 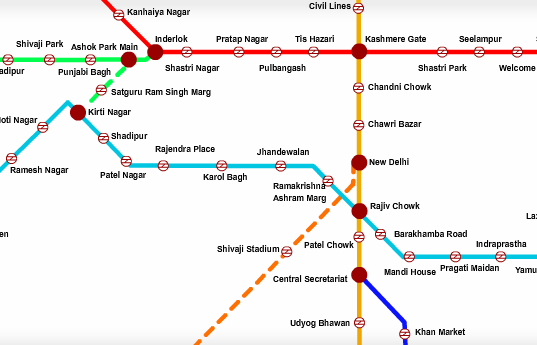 The full Delhi Metro network map is here, but this slice is the only part of the system where lines connect with one another.

What's wrong with this picture?  Well, suppose you want to go from Shivaji Park, on the green line in the upper left of the image, to Khan Market, in the lower right.  That's right: three connections.

Developing a new metro in a crowded city is always an exercise in compromise, but I'm struck by how often one of the first compromises is network integrity, easily measured in the reasonableness of the number of connections required.

In an idealised grid network, the maximum number of connections for almost any trip is one.  Plenty of real-world networks require two connections for a range of trips between secondary stations.  But requiring three is pretty remarkable.

30 Responses to the connection-count test

You are here: Home › the connection-count test