San Francisco's Bay Area Rapid Transit system (BART) is, let's be frank, extremely grey.  Most of its above-ground stations feature vast expanses of exposed concrete, true to the prevailing modernism of the age.  (Most of the system was designed in the 1960s.)

At stations like MacArthur, where the grey station infrastructure interacts with the surround grey ramps of the freeways, one can wonder if the original BART planners were so obsessed with competing with freeways that they deliberately chose freeway-like lines and colors, especially where real freeways were nearby.  This, of course, would be competition by resemblence rather than by differentiation.  At one stage, that probably made sense.

And yes, cool grey can be beautiful, but only if there's color to throw it into relief.  Modernism sometimes drew encouragement from the coolness of classical Greek and Roman architecture, but of course the ancient world seems colorless to us only because paints, fabrics, and other vehicles of color don't survive the centuries.

So it was fun to open my mail this morning and find this painting by Alfred Twu, reimagining the freeway-dominated landscape of MacArthur BART station with a more tropical sense of color.  Why must we go to Germany to see bright colors and strong choices in design? 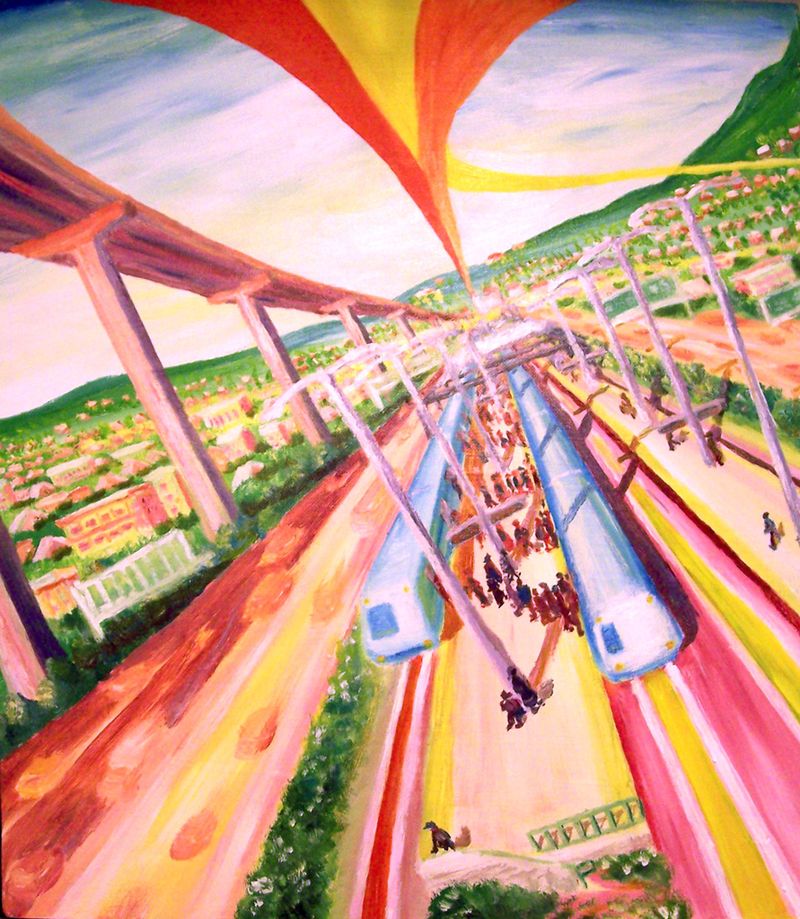 UPDATE:  I can't resist highlighting a comment from jfruh:

I always think that BART is what someone in 1969 thought the future was going to look like.

If you're too young to remember 1969, I strongly recommend reviewing Stanley Kubrick's great film 2001: A Space Odyssey (1970).  When I rode BART for the first time in 1976, I felt like I had arrived in the world of that film.

18 Responses to beyond grey

You are here: Home › beyond grey