Moving bus stops further apart achieves a range of benefits in speed and potentially frequency, as I've argued here and here.  Zef Wagner at Portland Transport recently laid out a similar case in the Portland context.  The post and most comments are worth reading, but I wanted to quote this dissent from commenter Cora Potter.

Please keep in mind that you have to weigh any time/cost savings of stop consolidation with providing adequate mitigation for people with barriers to accessing transit stops (disabilities, cognitive barriers that require clear landmarks, etc).

Shuffling these riders off to LIFT [demand responsive paratransit for disabled persons] is not a cost effective solution. The average LIFT ride costs nearly $30 (one way). Even with a conditional eligibility system, you run the risk of increasing costs to the point that you might actually end up with more operating funding deficits than gains. In addition, while LIFT is a complimentary service, meant to be comparable in timing and experience for the consumer, there are tolerances to the system built in and a LIFT trip is usually longer, less direct and less convenient in that it requires an advance reservation. The ability to access the fixed route system is usually the least restrictive and most convenient means of travel for people with disabilities who can reasonably access a transit stop.

When you raise the bar for reasonable access by spacing stops at .25 mile, or 4 blocks or greater, you start significantly limiting what a person with barriers to walking or cognitive barriers can accomplish and make it far more of a challenge for them to reach a stop in a reasonable amount of time, or with a reasonable amount of challenge. The difference between walking one block in the cold and rain vs. walking three blocks in the cold and rain can present a huge challenge to a person who can not walk at a 3 mile per hour pace, and is more sensitive to cold temperatures due to normal aging.

So – just keep in mind that wider stop placement, particularly for bus service, will exclude a segment of the population from accessing fixed route. You need to weigh the gains in convenience for people who have few or no barriers to accessing transit with the social and financial costs of excluding the people who do experience barriers to access. My personal opinion is that everyone loses when older adults and people with disabilities are excluded from fixed route by design. You might gain 3 minutes and the sense that you're getting somewhere faster – is that really worth service cuts on other bus lines to offset the increased costs for ADA paratransit? Is it really worth socially isolating people with disabilities? And, with the aging of the population, we really need to start taking the needs of older adults seriously and not constantly tune our system to serve just the needs of commuters.

A quibble: I disagree with dividing the population into "older adults" with "commuters," as Cora does in the last sentence.  The consituency for larger stop spacing is basically anyone who wants to get where they're going as soon as possible, and who is open to walking a bit further in order to achieve that.  This is not everyone, but it's a larger group than "commuters," who are people making rigidly scheduled trips to or from work or school.

But I agree with both the practical and ethical dimensions of the comment.  The mobility issues faced by older and disabled people are real and the costs of serving them with paratransit are high.  I also believe that allowing older people to become socially isolated is both economically and ethically unacceptable.

On the other hand, it's very, very hard to organize the mobility limitations of small, scattered numbers of people into facts.  In the early 1990s, when US transit agencies were struggling to implement the Americans with Disabilities Act, no issue was more vexed and emotional than eligibility for expensive paratransit services.  For example, ADA is clear that age, by itself, is not a disability — an important insight because people are not only living longer but remaining able-bodied longer.  The process by which a local government assesses people's disabilities is obviously highly emotional for the individual in question and challenging for all concerned.

A similar issue applies to bus stops.  When we move bus stops further apart, lots of people complain, and people with mobility limitations complain bitterly.  But given the high cost of the close stop spacing, how should those claims be assessed?  In some transit agencies, the default policy has been: "If anybody complains, cave in."  I'm not ashamed of suggesting that transit agencies be more forceful in articulating the tradeoffs, which requires educating their elected officials about what's at stake.  Cora's done an excellent job of articulating one side of that tradeoff. 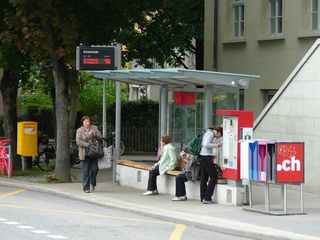 I'd also note that in Europe and Australia, stop spacing is wider than in North America.  In Europe, many stops also have major infrastructure that signals their permanence.  Everyone, whatever their mobility limitation, works with that.  The result is that service runs faster and more reliably.  So from that perspective, this is partly a question about how to transition to that outcome.  It could be done most peacefully if it happened over decades, but ours is an impatient age, and transit agencies are under too much pressure to wait that long.

Part of why this is less of a problem in Europe, I'm guessing, is that the permanence and infrastructure of many stops signals clearly that you should take them into account when deciding where to live.  If an older adult can anticipate becoming dependent on public transit in the future, the location of transit stops should be part of their location decision.  This, to me, fits into a much larger agenda of insisting that everyone who makes a location choice — especially about where to live — should be required to acknowledge the transit impacts of that choice.  Today it's still common to encounter the other sequence, in which someone (a) signs a lease or deed of sale or development agreement and then (b) yells at the transit agency because the service isn't what they desire.

So as usual, I don't have an answer, but I do think the question needs to be seen as geometrically inevitable, which means that those who disagree with us have a rational and ethical basis for doing so.

39 Responses to dissent of the week: impact of wider stop spacing

You are here: Home › dissent of the week: impact of wider stop spacing