Posted on May 11, 2012 in Connections, Transfers, Fares, Privatization, UK

Peter Brown is a lifelong UK transit enthusiast (and an HT reader from the earliest days).   He is a member of the Light Rail Transit Association (LRTA), and a former volunteer tram driver at Seaton Tramway, Devon, England.

Twenty six years after the Thatcher government deregulated local bus services in the UK (outside London and Northern Ireland), the calls for some form of re-regulation persist.

The latest issue is the stated ambition of the Tyne and Wear Passenger Transport Executive (PTE), which today calls itself 'Nexus,' to restore government control of planning and management for the bus system in the Newcastle-upon-Tyne/Gateshead/Sunderland conurbation.  This is significant because for a few years in the 1980s this authority operated the UK's only example of an integrated transport system on a par with European best practise — a system that was destroyed by the Thatcher government. 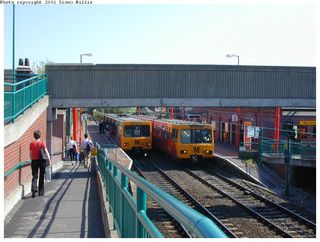 In the early 1980s, the Tyne and Wear PTE directly operated a large bus system which was formed by the takeover of the former municipal fleets of Newcastle, Gateshead, and Sunderland, and also built and operated the LRT system (The Metro).  During the short life of this integrated system it was possible to travel between any two points on a single ticket by bus, local train, Metro, and ferry services. The bus system was redesigned to feed into the metro at purpose built interchanges for journeys into central Newcastle, thus reducing bus movements across the heavily congested Tyne bridges.

Unfortunately the Thatcher Government deregulation of bus services destroyed this integrated network.  Deregulation swept away a regulated system that had existed in the UK since the 1930s. It meant that bus companies (referred to as ‘Operators’ in the UK) had to self financing through the fare box. Blanket subsidies and any form of network co-ordination (or what Americans would call "integrated network planning") were terminated.  In short, it became illegal to think of transit as a public resource, integrated with the city, and managed for greatest possible efficiency and usefulness.

Instead, the ideal became competition.  Bus operators could operate "commercial" (non-subsidised) networks anywhere, and the role of local government became to purchase subsidized services wherever more service was desired.  Integrated transit features that many cities take for granted — including citywide fare systems, lines that aim to connect with one another, and rational management of limited resources, became effectively impossible.

Yet if the goal was competition, the system failed.  As in most of the UK today, there is very little direct on-the-road competition between the three bus companies in Tyne and Wear.  Instead, each company has settled into a "territory" in which the lack of competition is the key to profitability.  Passenger journeys starting in one operator's territory that finish in another's require the passenger to change buses and pay twice. Nexus is no longer happy about this and wants to take over the commercial networks and purchase operations from the bus companies – this is known as a 'Quality Contract' and there is new (as yet unused) legislation to do this.

In short a Quality Contract would involve the suspension of deregulation within a specified area and the imposition of a tendered system whereby the transport authority would specify the network, fares, frequencies etc. As urban bus operation outside London is a profitable activity (nationally approximately 90% of bus mileage requires no direct revenue support) the proponents of Quality Contracts believe that massive subsidies would not be required.

In order to bring about a Quality Contract several conditions must be satisfied, with an independent board to adjudicate. The promoters would have to prove that the new system would:


All the above leave lots of room for argument against them, and since the commercial operators would in effect have their businesses sequestrated without compensation it is likely they will use the legal process in full, including the European Court of Human Rights.

The alternative approach for a local transport authority to increase its influence in the provision of bus services is the 'Statutory Quality Partnership' as demonstrated in Oxford last year using powers from the 2008 Transport Act.

The 2008 Act expands the terms of the previous voluntary Quality Partnership model to allow a LTA [Local Transport Authority — the tier of local government responsible for transport] to specify requirements as to frequencies, timings or maximum fares as part of the standard of service to be provided under a scheme, in addition to quality standards. But it also provides important safeguards to ensure that unrealistic conditions are not imposed on operators, and that their legitimate right to a fair commercial rate of return on their investment is not undermined. The process by which an operator can object to particular standards included in a scheme relating to frequencies, timings or maximum fares, is an important feature of this. But at the same time it places a responsibility on them to justify the grounds for their objection, thus minimising the scope for vexatious or frivolous objections.

In the context of Oxford, where such a scheme was implemented last year, there is no history of municipal bus operation. This could account for the partnership approach being more acceptable to that LTA.

5 Responses to guest post: peter brown on the decline of u.k. privatization of transit

You are here: Home › guest post: peter brown on the decline of u.k. privatization of transit