Last week, several people emailed me to make sure I had seen Mini Metro, a simple but absorbing transit game that’s come out in alpha. 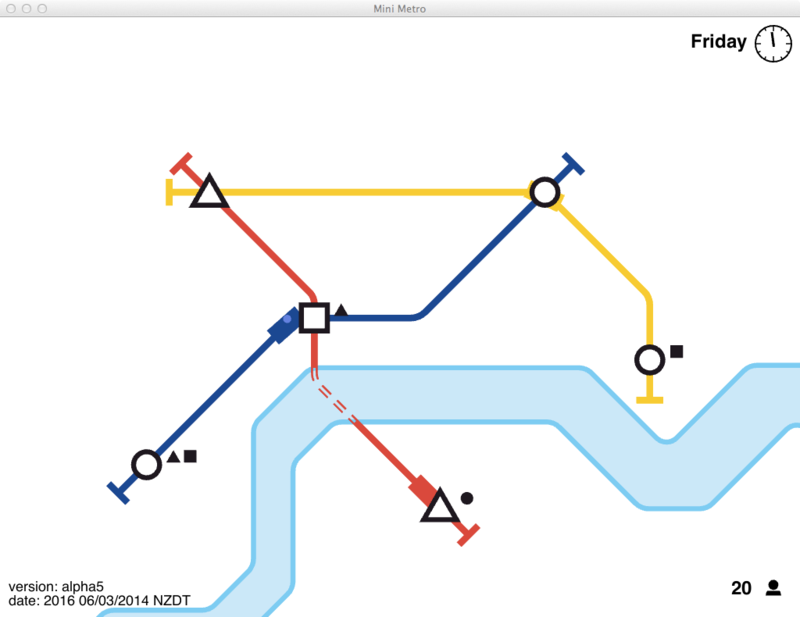 Between deadlines, I played a little, but in two hours we reached a win-win condition: The program was sure it had beaten me, and I was pretty sure I’d exhausted its possibilities.

The deal here is that you can draw lines but you can’t site stations.  You build your first humming three-station metro, but then new stations just appear, further and further out, emitting graphical screams until you extend lines to serve them. 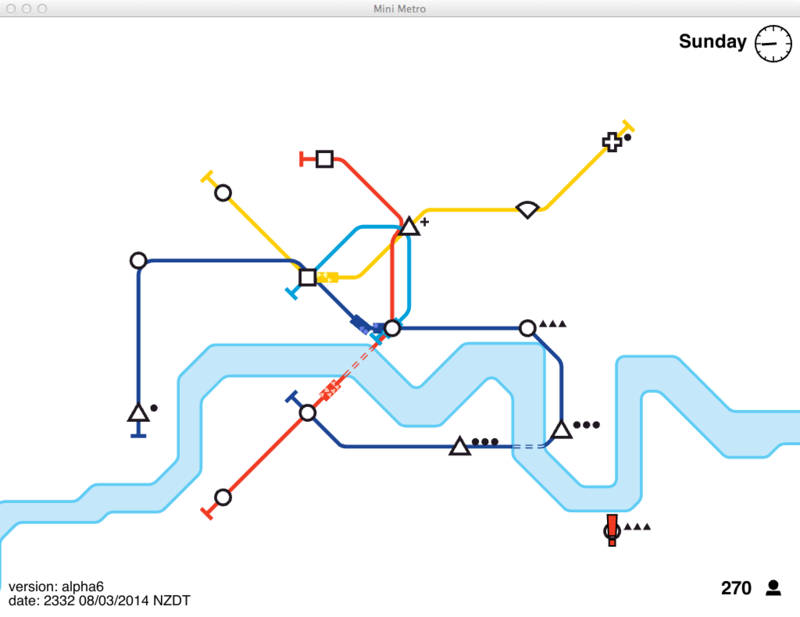 Each line has just one vehicle on it, so as the line is extended its frequency drops, so it visits each station less often, increasing the risk of crowding.  That's accurate in its own way: Under any fixed budget, frequency and extent are inversely related.

Survive enough time and you’ll get upgrades: an additional line, or a chance to increase a line’s speed and capacity so that it drains its stations  more often.

But it’s not enough.  Before you know it, stations are getting overcrowded and when one of them finally fails, remarkably, the game calls this “losing” and ends.  You see it as a little clockface loop on a crowded station, in this case the next to last station from the west end of the Blue Line. 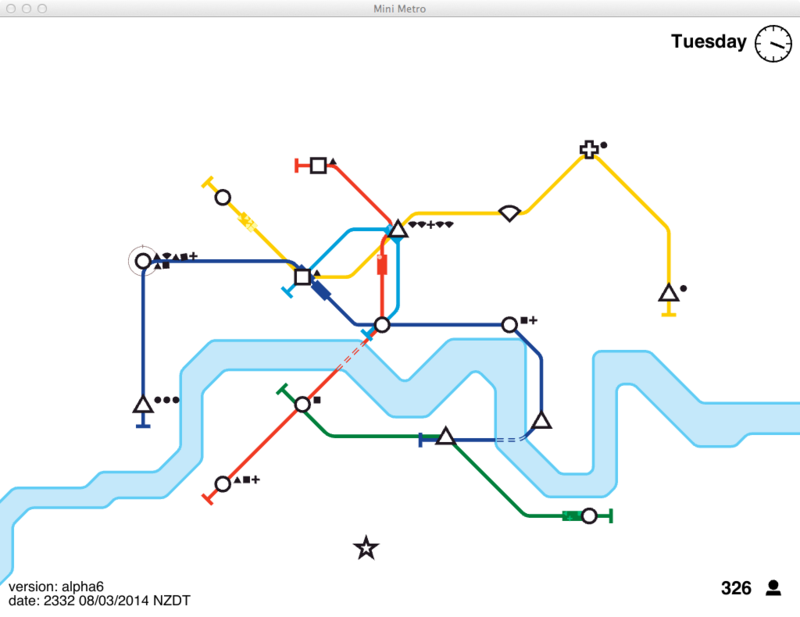 You are not offered options to encourage flexible work hours, run shuttle buses, or hire Japanese train-packing specialists.  Every round I played ended up in the “station failure” condition.

There's plenty of nonsense here.  Optimizing for capacity is a very different problem than optimizing for customer utility or freedom.  With a single train on each line, you add capacity by doubling up lines at key stations, or sometimes by creating odd loops whose purpose is to visit each station often, not necessarily run straight lines that would be useful to the customer.  In the session above, a looping downtown shuttle seemed useful, for example, though these are usually disappointing in reality.   Still …

There are may ways to construct a transit game, but if you want it simple and sexy, a metro game that focuses on capacity is not a bad way to go.   What’s more, although many of the assumptions are absurd, the game’s final message is surprisingly accurate:  Politicians demand that transit systems spread out but not that they provide enough intensity — whether that means frequency, speed, or in this case capacity.  Transit agencies are always being told to spread themselves thin.

In Mini Metro, the relentless appearance of new stations (often in awkward and expensive places) mimics this constant pressure on transit agencies to spread out horizontally.  The slow trickle of funding – most of it spent just keeping up with that spread – is never enough to stop overcrowding.  Sooner or later, transit agencies have to invest in core capacity – new lines or bigger platforms  where the failure points are, which is often downtown.  But to too many local leaders, that’s read as “spending too much money downtown instead of in the neighborhoods,” or "they already have a transit line, so why are they getting another when my district/city/ward has none?"

Imagine how a campaign to get every city councilor playing a well-designed game might raise consciousness.

If any developers out there are interested in working with me on this, let me know.  As longtime readers know, I’ve been thinking about this for years.

7 Responses to overcrowding and underfunding: the lessons of “mini metro”

You are here: Home › overcrowding and underfunding: the lessons of “mini metro”