A sobering new report was released recently by Ride New Orleans, a nonprofit advocate group. It covers the erosion of the city's transit network in the years following 2005's Hurricane Katrina, revealing that while the city's population and economy have largely recovered, its transit services have not.

Some key points from the report: 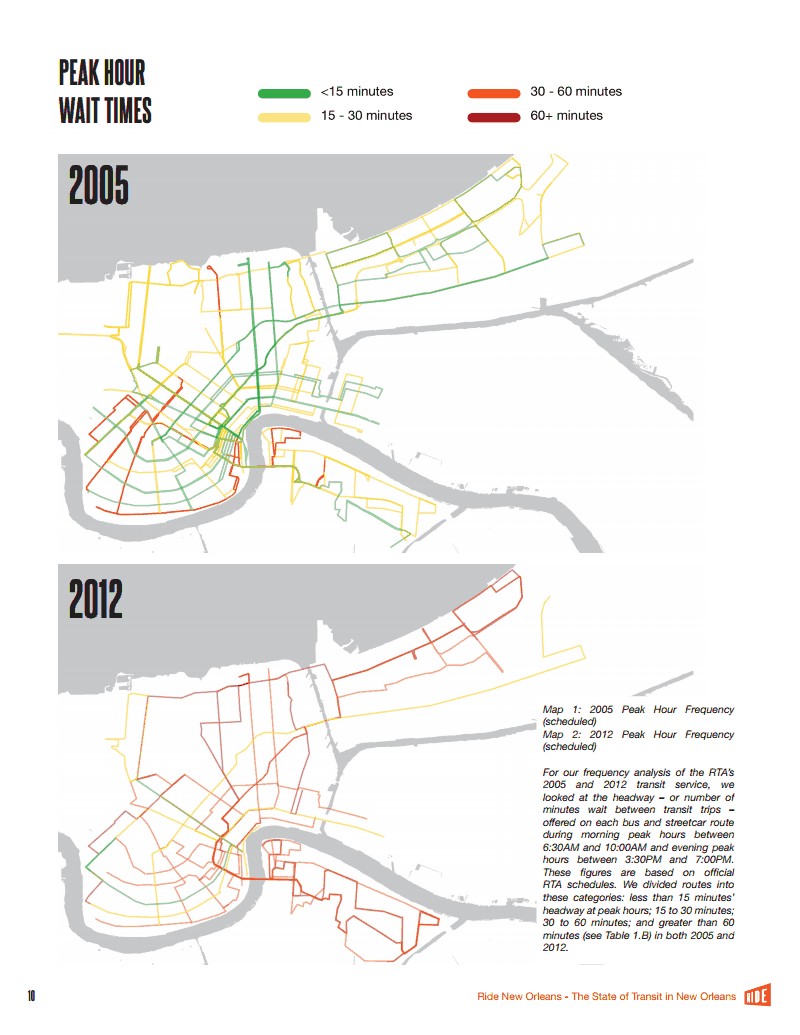 What accounts for the difference between the relatively robust network of 2005 and today's service offering? Obviously no transit agency would have an easy time recovering from the damage done to its vehicles and operational infrastructure by a catastrophic event like Katrina. It would be ludicrous to suggest otherwise. But nearly a decade on, something has prevented RTA from ramping back up to its prior service level.

Ride's analysis points to a number of factors. First is a decline in fare revenues, attributable both to the smaller population of the city since the storm, the diminished service offering, and a base fare of just $1.25 which hasn't increased since 1999. Second, since the storm, RTA's operating costs have increased dramatically, to around $168/revenue hour. This is much higher than many peer agencies, and as such limits the amount of service RTA is able to deploy with its current resources.  The report also raises questions about the agency's decision to prioritize the restoration of the historic streetcar system.

It's clear that RTA has faced unique challenges; even the transit systems effected by Hurricane Sandy did not have to deal with the mass population displacement or degree of infrastructure damage New Orleans sustained. But while the city's transit service is today in dire straits, if Ride's analysis is correct, it cannot long continue, as it appears RTA is now operating at a deficit, and rapidly drawing down its reserves.

Thus, an opportunity exists on the horizon, for RTA and for the city of New Orleans: to reimagine transit in a manner that helps more people travel to more destinations more easily, and to develop a durable system less vulnerable to disruption. Clearly this would be a difficult undertaking, but if continuing down the present path implies continuing to provide vastly inadequate service, at an exhorbitant cost, perhaps it is a necessary one.

How good are we at prediction?
Email of the week: on Robert Steuteville’s defense of slower-than-walking transit

11 Responses to New Orleans: nine years after hurricane, transit is far from restored

You are here: Home › New Orleans: nine years after hurricane, transit is far from restored