Steven Strogatz has a intriguing column in the NY Times about a 1950s era “hydraulic computer,” which modelled the operation of a national economy using fluids flowing through a machine.  As the water circulates it fills or empties tanks, trips levers, and occasionally plots a graph of the level of a particular tank through time.  For example, when a tank called “Minimum Working Balance” fills up, it begins overflowing into a stream called “Income.”     (Click to enlarge.)  The thing has a series of input points where you can change something (modelling an external input of some kind) and see what happens as a result.
The commenters seem to focus on how charmingly obsolete the thing is, but my first reaction was:  What a great teaching tool!  Someone should create working online model of it, complete with all the rushing and gurgling sounds, that we can all play with on our laptops.
In a democracy, the greatest threat to national security is public ignorance.  The same is true of a democratically governed city.  That’s why as a transit planner, I’ve come to view explaining what I do as one of the most important parts of my job.
People learn a system better by playing with it than by reading about it or listening to lectures.  That’s why a science education involves so much time in the lab.  Playing with a system gives you a “feel” for a topic that’s seeps into your subcionscious thought processes in a way that book-learning rarely seems to do.
I’m sensitive to this because although I got a great graduate education in another field, I learned transit planning entirely by doing it, and it took me years to figure out how to explain what I was doing to an average citizen.  But such explanations are crucial, because in the absence of understanding a citizen will fall back on myths.  These myths are almost always false analogies to other things that a citizen does have a feel for, such as cars and traffic.  When I’m talking about basic transit concepts like speed and frequency, for example, I find that everyone understands speed, but it’s much harder to get them to understand frequency.  They can understand waiting time — they’ve waited for elevators even if they’ve never waited for a bus — but it’s often remarkably hard to get them to see how frequency percolates through a system, affecting so many other aspects of how (and whether) a transit system works. 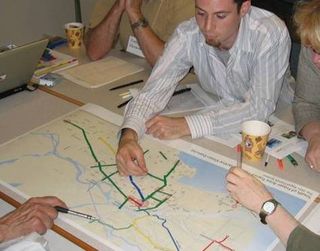 The tape-and-mylar planning games that I use (described in this post, next to the photos) are a crude example of a tool for giving people the necessary “feel” for transit, but we need more subtle ones that cover other aspects of the trade.
Like many urbanists, I played for a while with Sim City when it came out in the 1990s.  Sim City’s model of public transit is worse than ignorant.  All you need to do is build a rail line and presto, trains start running!  In the real world of transit, operating cost swamps capital cost,* so if you don’t have a funding source to operate a service year after year, you don’t have a service.  (Again, this is a false analogy with cars and roads, where the capital cost, the contruction of the road, really is the largest expense, because the traveller pays to run the car.)  I suspect Sim City did subconscious harm in training a generation of inquisitive young people that transit is just about building things.  Some of those people are influential architects today.
The success of Sim City as a game shows how desperate people are for good models of how cities work, and if we don’t give them good ones they’ll use bad ones.  Who’s out there working on the transit dimensions of this problem?
Diagram of Phillips machine from Barr, N. (2000) “The history of the Phillips machine,” via New York Times.
* Generally, the cost of running transit is dominated by lhe cost of labor.  The big exceptions are (a) driverless metros such as Vancouver’s SkyTrain and (b) developing-world countries were labor is very, very cheap.

You are here: Home › Suppose Money is Like Water