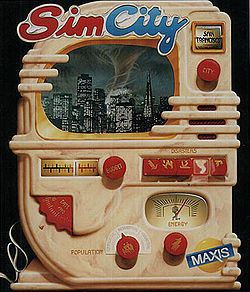 Ah, SimCity.  … As a youngster I spent many hours building fields of residential tract housing, industrial parks, huge blighted and substantially vacant commercial districts, mega-highways connecting them all, and Godzilla.

When I recently discovered that the original SimCity was released as open source, I had to download it and try it out. I knew that it was inaccurate, but it was nostalgia. Then I discovered exactly how inaccurate it was. “No mixed residential and commercial areas?!? WTF!” I did play it long enough to also notice that transportation was pretty much a capital expenditure with no operating costs. Sigh.

Yes, those are the two of the worst fallacies built into the original Sim City:

I’d love to hear from other people who played Sim City in the 90s.  Did it affect how you think about these issues?  Or was the artifice so obvious that you just treated it as harmless fun, as irrelevant to your urbanist thinking as an Egyptian-themed slot machine is to the study of classical Egypt?

Now, Sim City is a game, and to be fun it has to be quick to learn, so of course it will simplify.  The problem is that these two fallacies in Sim City are also great fallaces of mid-late 20th Century urbanism.  Sim City didn’t just simplify, it simplified in the direction of the old habits of urbanist thought — habits that were already being challenged (in part by the New Urbanism) by the time the game was invented in the late 1980s. In short, Sim City could be hailed as a triumph of reactionary brainwashing — in that it instilled in a generation of 1990s teen geeks all the worst assumptions of 1960s city planning.

Peter, however, looks to the future:

Maybe your new US DOT readership could shake loose some funding for a project similar in scope to the DoD’s “America’s Army” video game? I can see it now: “Engage residents in realistic dialogue about the merits of density, reduced roadways expenditures, and increased public transit expenditures. ‘American Planner’ allows for sophisticated team play and role specialization. Play as a time-stressed project manager, travel demand modeler, or even as a community cycling and pedestrian coordinator. It’s your choice!”

What do you say, Mr. Secretary? Future planners of America are awaiting your bold initiative.

While we’re waiting to hear back from the Secretary, I’d love to hear from you,  Any aspiring simulation-builders out there?  And if anyone’s already working on this, let me know.

UPDATE:  Excellent comments on this one, many assuring us that post-millennium versions of Sim City were better.  I’m relieved not to have to investigate this and risk acquiring a new addiction.  But see especially the account by Morgan Wick on how urbanist fallacies percolated through later generations of the Sim empire.

22 Responses to Did Sim City Make Us Stupid?

You are here: Home › Did Sim City Make Us Stupid?