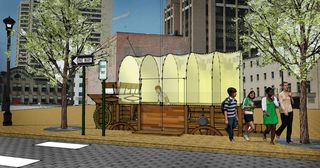 Bus stops can be pretty basic, or pretty elaborate.  Aaron Antrim points me to a Utah-based project, Next Stop Design, that collects ideas for bus stop design from the public, then allows users to rate them.  Such a project on a large enough scale could start to generate some “wisdom of crowds” about what kinds of bus stops people like.  (This currently leading design, a “covered-wagon” theme for Utah, is by “hopkimp,” details here.)

It’s a fun site, but it raises two cautions.
First, we’ll all naturally like the more expensive ones.  Some of the ones now being favored are so elaborate that you’d only use them at a major stop.  How do we sort ideas into tiers representing approximate cost, so that we can put the crowd-wisdom to work on the real problem:  How do we design something that we can afford thousands of? 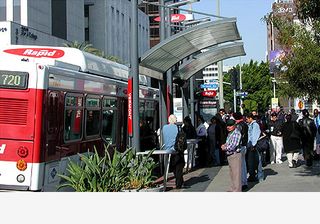 Second, sometimes the design of a bus stop should be driven by the need to brand the service.   The Los Angeles Metro Rapid stops, from a concept by my friend Doug Suisman, are all about creating a consistent look across the system, so that these high-frequency, relatively fast red buses stand out from all the visual pandemonium of Los Angeles.  The point was not to make each stop stand out, as the Next Stop Design favorites tend to do, but rather to make the whole system stand out as one system. 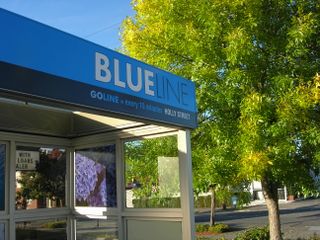 A humbler example is this “Blue Line” bus stop, an outgrowth of a project I did in Bellingham, Washington.  (Click to enlarge.)  They had lots of infrequent lines that overlapped on a few major segments, and on those segments those lines added up to a frequent all-day service. So they created a brand just for the common segment, so that we could make that service visible as something better than all the individual numbered lines that contribute to it. The bus stop design is fairly basic, but an overly flamboyant stop architecture would have distracted from the message about the service.
And ultimately, it needs to be about the service.

Did Sim City Make Us Stupid?
Comment of the Week: Connection or Intersection?