Long ago I did a post on my memories of the original Sim City, which I played a bit in the 1990s until I’d hammered its limited possibilities to rubble.  My impression looking back was that despite a minimal transit option, Sim City encouraged us to think in terms of 1960s city planning: rigid separation of commercial, residential, and industrial zones, and a car-based approach to transport supplemented by rail only at very high densities. 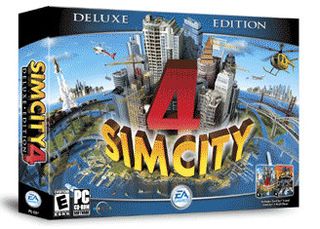 Lately I’ve played a little with Sim City 4 including its “Rush Hour Expansion Pack.”  Given that I have a fulltime job plus a book to write, this was a perilous lapse, but I’m relieved to report that the game spat me out within just a few days, uninterested in playing further, and not just because it crashed my MacBook a few times.

Has Sim City 4 really improved the range of cities that we’re allowed to envision?  Certainly, its small grid squares allow the creation of neighborhoods that feel more “mixed use.”  The Rush Hour module also allows you to look in more detail at the travel choices of your simulated residents.

But a few things are still not good and one thing is actually worse than in the 1990s version.

What’s worse is that buildings must now have orientations toward a particular street.  A building that can be accessed from several directions is deemed impossible.  A building that loses the street it’s “facing” dies even it it still has access on another side.  The simulated travel patterns assume that everyone goes through each building’s front door, even when the “building” is a shopping mall, university, or stadium.  (And even though the stadium has only one door, nobody ever gets hurt in a crush of stampeding fans.)

From a transit standpoint, the greater irritant is that while many new modes of transit are now provided, you still don’t control transit service; the prevailing assumption is that creating transit infrastructure — wherever you find it convenient — will cause useful service to exist.  A SimCity model of the Bay Area, for example, would leave the user clueless about the difference between BART (every 20 minutes or better) and Caltrain (every two hours at off times).  Both have rails, so what’s the difference?

In suburban California in the 90s, it was common to see developers build new bus shelters in places where there was no service, as though they thought “If I build a shelter, a bus will come.”  Sim City 4 is based on that exact assumption.  Obviously, I want to draw my own bus, rail, and subway networks, and turn the frequencies up or down.  Such a tiny tool, easily integrated into the budget panel, would have forced legions of geeks to at least learn the mathematical relationship between frequency, line length, and operating cost.  The real expense of most transit is operations, not construction.  SimCity constantly reminds us of operating cost when it comes to utilities and other public services, but the only sign of transit operations cost is a vague “mass transit” line item, and nothing too terrible happens if you turn it down a bit.

Yes, of course, the scale is all wrong.  Cities are quantitatively miniaturized, so that cities of 30,000 start needing subway systems, airports, and stadiums.  People don’t seem to walk any further to subway stations than to bus stops, and neither walking distance makes any sense compared to a real city.

And yes, after a while, it feels like all you’re doing is accounting.  Turn down the various budgets until your overall budget is in balance, then turn them up individually as performance sags or interests squeal.

And no, since you ask, I didn’t want a mayoral mansion, and certainly not a statue of myself, no matter how often the game offered them.  Spend that money on transit, the mayor says!

33 Responses to Is Sim City 4 Still Making Us Stupid?

You are here: Home › Is Sim City 4 Still Making Us Stupid?