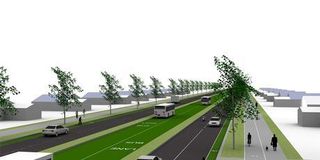 Auckland Transport is recommending the higher-end median busway solution for a difficult suburban arterial corridor that we studied for them last year.  (The corridor extends from Panmure rail station through Pakuranga to Botany via Pakuranga and Ti Rakau Roads.)  It would be the main radial rapid transit corridor for Auckland’s far eastern suburbs.

When you’re looking at fitting some sort of “Bus Rapid Transit” (BRT) into a suburban arterial, the question of median vs side lanes is bigger than it sounds.  It largely determines the scale, prominence, and apparent permanence of the project.

Putting BRT in the median is the high-risk, high-benefit, high-impact choice.  A median BRT solution looks and feels like a separated busway, and its dedicated median station infrastructure makes the service look both prominent and permanent.  It obstructs a lot of turning movements that motorists are used to, and is generally harder to compromise.

On the other hand, putting a bus lane on the side, as Seattle’s new Rapid Ride Line A does, delivers a more compromised outcome that has much less impact on car circulation.  Stops on the side risk looking like any bus stop, so unless you make a very strong statement with the station architecture, the service may not look like permanent infrastructure.  A side lane is also generally shared with cars turning into and out of the street on that side, which is often a source of roughness and can mean significant delay at major intersections.

That’s not to critique the Seattle-area examples, which are designed to a different scale.  But I  congratuate Auckland Transport for going out to the public with the more ambitious option, and thus triggering a real and enlightening debate.

(Commenters:  Note that I’m speaking to both left-hand-drive and right-hand-drive countries with this post, and thus avoiding all references to left and right!  I challenge you to maintain similar neutrality.)

Basics: Some Tools for Small Cities
Is Sim City 4 Still Making Us Stupid?