Early in my career, I did a number of network designs for free-standing small cities in the American West.  These cities, say populations of 30,000-100,000, tend to have a similar set of problems and opportunities, and could probably benefit from a little more theoretical focus.  The same issues arise in most of these cities across North America, Australia, and New Zealand, including:

You can see almost all of the issues, and the approach I usually recommend, in Great Falls, Montana.  I led a study that refined the current network for Great Falls Transit in the late 1990s.  Recently, local commenter Kathy called my attention to their network map.  It was interesting to discover that it’s hardly changed since I worked on it.  (As always, click graphics to enlarge.) 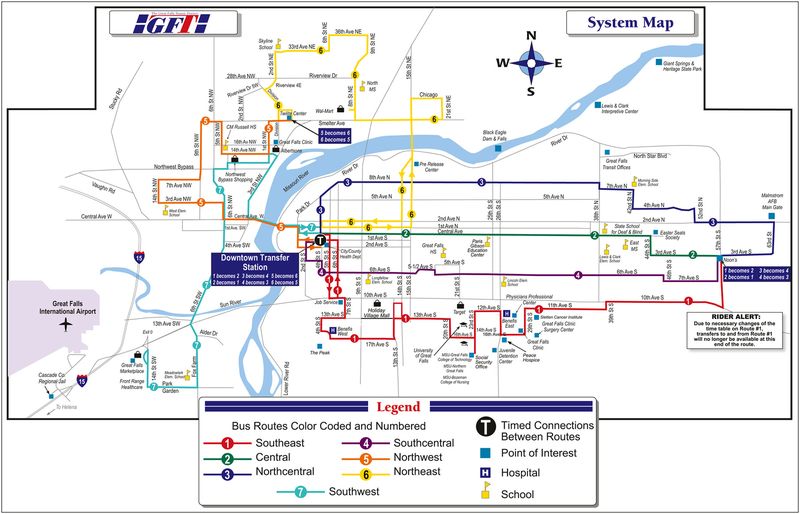 It’s a network of routes mostly running every 30 or 60 minutes.  The central idea of the network is the pulse, a meeting of buses from each route every hour or half hour at a central point, so that you can connect from any bus to any other even though the frequency is poor.  Geometrically, there is no other solution to the problem of connections in low frequency everywhere-to-everywhere networks.  It’s routine in small cities across North America.

In Great Falls, the pulse occurs at a downtown transit center which is also, very usefully, the station for intercity buses.  However, the design also provides for an outer pulse point at the far east end.  Most pulse networks create these opportunities, but not all take advantage of them.

In Great Falls, the ideal would be that Routes 1, 2, 3 and 4, which all cross near the east edge of the city, should make a timed connection there as well.  After all, if the buses are all at the downtown end at the same time, they will tend to be at their outer end at the same time, too, so you should also be able to do a pulse there as well.  If Routes 1, 2, 3, and 4 all had exactly the same running time, this would work perfectly.

It doesn’t quite work in Great Falls, because the lengths of the route are too unequal.  We tried to make it work, but ultimately, Route 1 was just too much longer for the others, so to get all the buses to downtown at the same time, Route 1 has to leave the east end before the others arrive.  Note that their map has a warning, near the east end of Route 1, that you cannot make a timed connection there.  Connections among 2, 3, and 4 are possible.

Another trick I often use is the through-routing at the ends of lines, signified by the little boxes that say things like “5 becomes 6, 6 becomes 5.”  This is both a network design strategy and a legibility strategy. 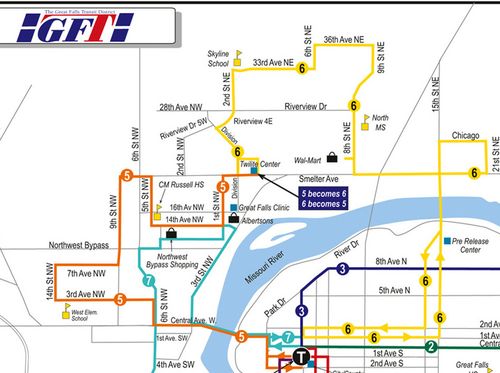 Operationally, Route 5 and 6 buses aren’t going back and forth on individual routes.  Instead, they are operating continuous two-way loops: the bus that goes out of downtown as 5 comes back as 6, then back out as 5, then back in as 6, etc.  Another bus is doing the opposite.

So why do we number the routes as we do?  Why don’t we describe them as they are: a clockwise loop and a counter-clockwise loop?  Because on balance, that would be more complex.  If most people are travelling two-way into or out of the city, why tell them that they need Route 5 to go out and Route 6 to go in, and why clutter the map with overlapping loops and piles of one-way arrows?  It’s just simpler to present them as two way routes, then provide the note, for the benefit of the relatively few people who may find it useful, that you can ride through from one route onto the other.

Because of the nomenclature system, every single route segment in the Great Falls network is presented to the customer as two-way, with the trivial exception of pairs of adjacent one-way streets.  This is quite an achievement if you compare this network to many networks in similar-sized towns, which often present dizzying tangles of overlapping one-way loops.  Here, for example, is a bit of the network in Wodonga, Victoria, Australia (PDF of full map).  Compared to the Great Falls map above, how welcoming does this network look to you?

One-way loops mean that the way you get from A to B is different from the way you get from B to A, and may be much longer or shorter.  My insistence on presenting two-way services, as much as possible, is about offering a transit system that’s as legible as the street system, so that people find it welcoming not just for the trip they make every day, but for any new trip they may want to try.

I take pride in having designed the underlying structure of several small-city networks in the American West that are still running a decade or more later, including those of Chico, California (PDF, now part of Butte Regional Transit); Corvallis, Oregon (PDF); and Klamath Falls, Oregon.  You’ll see some of the same techniques at work in those network structures.  If your local small-city transit system needs unscrambling, send them a link to this post, and encourage them to contact me!

17 Responses to Basics: Some Tools for Small Cities

You are here: Home › Basics: Some Tools for Small Cities