Answer: When it relies on a pulse, or what Americans usually call timed transfer, with routes that run every 30.

A pulse is a regularly scheduled event, usually happening at the same time each hour, in which transit vehicles from a range of routes — usually running every 30 or 60 minutes — are scheduled to all meet together.  A group of hourly local routes, for example, might all come to the pulse point between :22 and :25 after the hour and leave at :30. That way, nobody has to wait more than 8 minutes for a connection even though the services in question are hourly.  Here’s a rough diagram of a half-hourly pulse pattern, by Ross Maxwell.1  (The original, slightly sharper, is on p129 here.) 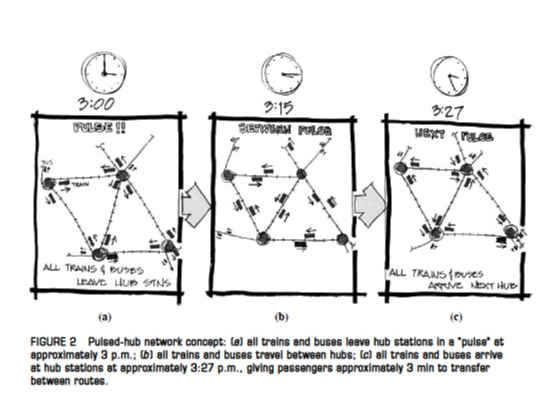 Often, pulses are organized around a main transit line, such as a trunk bus or rail line that takes you to a nearby larger city.  In these cases, the main line vehicle usually doesn’t dwell as the local buses do, since it’s the most crowded service and hence the most speed-sensitive.   Instead, the locals arrive a few minutes before the trunk passes through, and leave a couple of minutes after.

Pulses are the only way to provide connection wait times that are much, much better than the frequency of the services involved.  A pure pulse is also equally convenient for connections between any pair of lines, and thus for travel in any direction.

For this reason they are used universally, in North America, in small-city networks where frequencies are low and often also in suburban areas of large cities.  If you’re in a North American suburb or small city and see a large number of buses hanging out together on a street corner, you’re probably watching a pulse.  The sight can be vaguely humanizing; for a moment it looks as though these big obtrusive vehicles are people too, with human needs for social interaction every hour or so.

In Australia, by contrast, the prevailing operating habit is to scrupulously separate operating time from driver break time.  Drivers often dislike having their time at a pulse point counted as their personal break time, because throughout the pulse event they are mixing with customers, being asked questions, etc.  So in Australia, it’s more common for buses to arrive at the pulse point at, say, :22, drive onward to a separate layover point where the drivers can take their breaks away from customers, then drive back through the pulse point at, say, :30.

But frankly, Australian public transport authorities, especially those responsible for small cities and outer suburbs, seem reluctant to embrace pulses for reasons I don’t entirely understand.  Even in North America, agencies that rely on pulse scheduling prefer not to advertise it.  You may have to explore several timetables and compare them to each other in order to discover that pulse scheduling is in place.

I was introduced to pulse scheduling in Portland at a tender age.  I was a teenage transit geek then an undergraduate working part time at TriMet, the transit agency.  This happened to be the period (1979-85) when the lattice of suburban pulse networks was being constructed.

We spent a lot of time thinking about how the pulses interact with each other.  For example, if you have a pulse of buses at Beaverton Transit Center at :05 and :35 past the hour, and one route goes from Beaverton to Sunset Transit Center in 12-14 minutes, how do you schedule the Sunset pulse?  Do you set it at :20 and :40, so that this connecting route can serve both pulses but with just a few minutes to spare?  When this route is late, a lot of connections will be missed and a lot of people stranded.  Or do we just set the Sunset pulse at :05 and :35, so that the bus linking the two transit centers has lots of spare time but now has too much time to kill and will tend to arrive inconveniently early for one pulse or the other.  Or do we just accept that this line isn’t going to hit one or the other of the pulses precisely?

To do pulse scheduling, we have to plan the pulse schedule as we’re designing the network.  In the two-pulse problem I outlined above, we will think hard about the line connecting the two pulses and ask if we can either make it a little shorter (so that it will get there more reliably in 15 minutes) or a little longer (so that it will get there in 30 minutes without so much time to spare).  I have designed some large networks with multiple pulse points, all designed to work harmoniously.  To do that, I’ve always designed lines between pulse points with the specific goal of making them a certain length.

Pulse scheduling can often affect the schedules of a trunk line too, especially when that trunk line isn’t extremely frequent.  Even a 15-minute frequency on the trunk line (which is the all-day standard for most North American light rail, for example) may require adjusting the trunk schedule to better fit the pulse.  In particular, if a pulse that happens between :20 and :30 after the hour is partway along a trunk rather than at the end, and if the intention is all-way connectivity, that means that both directions of the trunk need to pass through the pulse point at around :25; in other words, a complete pulse requires that oncoming trunk-line vehicles be at the pulse point at or near the same time.  This is why pulsing is especially hard if the trunk line and local services are run by different agencies or operators.

In any case, pulse scheduling requires an intimate two-way conversation between the planning and scheduling tasks.  In agencies where the drivers’ union is legally entitled to sign off on scheduled running times, they have to be involved as well, because a disagreement over 4 minutes of running time can determine whether the whole structure works or fails.

Transit agencies that are not set up to have this conversation.  They locate planning and scheduling too far apart organizationally and become structurally incapable of noticing and exploiting pulse opportunities.  In other cases, pulses may simply not be the prevailing habit; there may be nobody around who is in the position to suggest them.

The organizational challenge presented by pulsing is, to me, a positive feature of the concept.  Better integration of planning, scheduling, and operations management has many benefits, and if the pulse challenge helps motivate an agency to get there, so much the better.

But pulse scheduling does have some practical limitations.  In particular, it struggles in any environment where the running times are prone to vary a great deal.

Pulses are about managing a low-frequency network, so they aren’t generally needed in inner cities  Pulses are almost universal in small-city design in North America, because most such cities have little traffic congestion and can therefore run a pulse reliably.  The best big-city agencies also do some kind of pulse late at night, when their services are very infrequent.  For example, this map of all night service by San Francisco MTA uses little black circles to highlight points where the lines make timed connections with each other, even though they’re running only every 30 minutes.  Note the complexity of the scheduling task implied by multiple timed connections along the same line; it’s an impressive commitment. 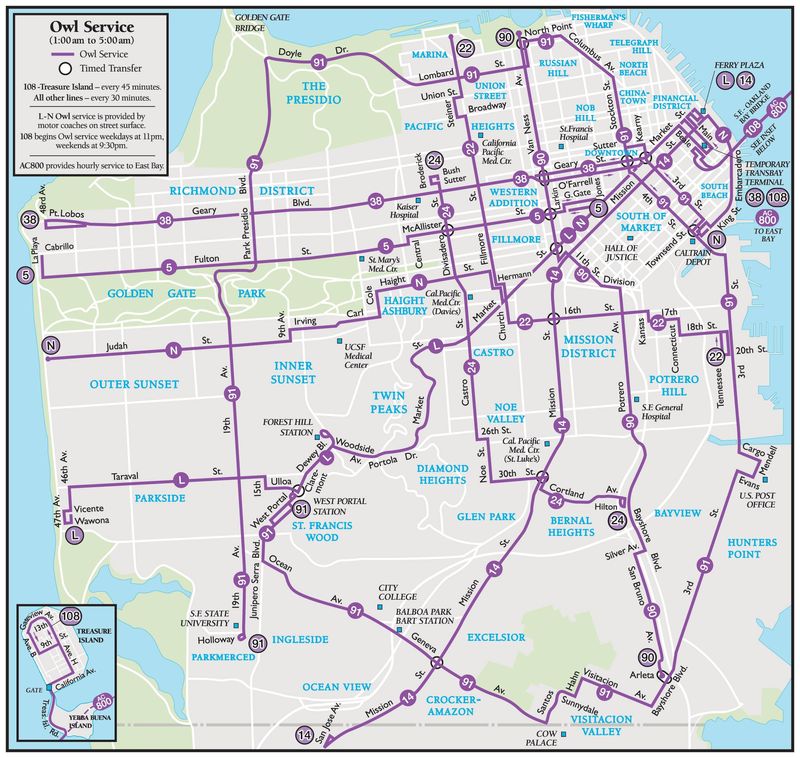 But in the suburban areas of big cities, running times vary due to traffic congestion and pulse operations struggle.  I vividly recall the moment in about 1983 when Tri-Met decided to let its pattern of half-hourly Beaverton-area pulses slip to a 40-minute pattern during peak hours because they simply could not guarantee travel times in peak traffic.  TriMet continues to attempt pulse operations because there is simply no other way to serve the multi-directional demand pattern of the modern suburbs, especially where many people work in widely scattered business parks.  I suspect that the difficulty of guaranteeing pulses in these settings is the main reason that big suburban agencies are reluctant to advertise their pulsing too much.  Small-city agencies, which don’t deal with such severe congestion, are more likely to emphasise that at the heart of their network, they have a pulse.

A lattice of interconnected pulse points, all beating as planned in unison or alternation in a pattern that repeats each hour, is a thing of beauty if you can visualize it, especially because if the motion of pulsing suggests the movement of blood through the heart.  It’s like watching the inner life of a large multi-hearted organism.  This can be a nice metaphor for other kinds of thinking about your city.

35 Responses to Basics: Finding Your Pulse

You are here: Home › Basics: Finding Your Pulse