Peter Parker of Melbourne on Transit recently sketched some frequent network maps for that city, the second largest in Australia.  You can find a range of efforts for various cities using the Frequent Network category.  My original post arguing for the value of frequent network maps is here.

Although Melbourne is mostly flat and its street network is mostly gridded, it’s striking how few crosstown or “orbital” services they are.  Over the past few years the main government initiative in this area has been the SmartBus program, a set of new frequent orbital routes.  Yet compared to comparably dense parts of Los Angeles, say, the grid is thin. 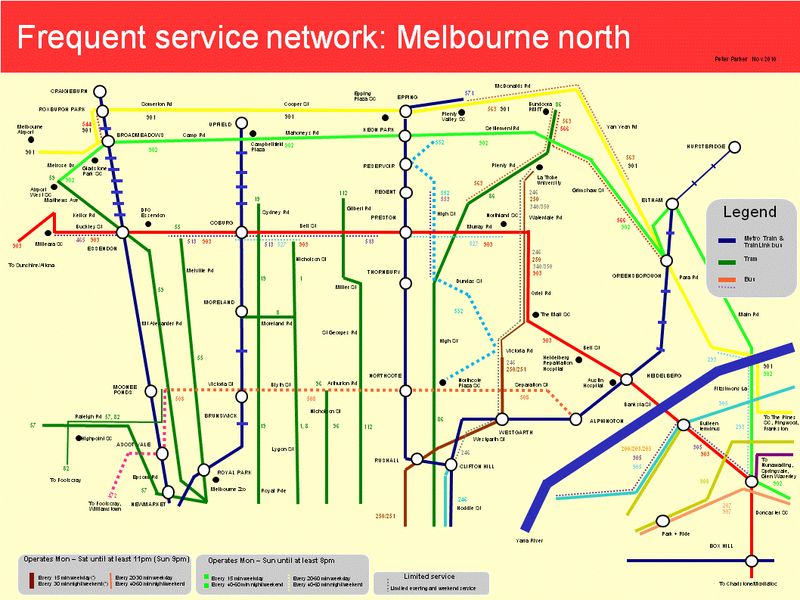 Downtown is right off the southern edge of this map, so much of this map’s area is pre-1945 dense inner city, a mixture of apartments, terraces, and small-lot single-family.  The north-south green lines are the famous tram network, while the blue lines are the electrified commuter rail — usually, but not always, at 15 minute frequencies or better.  In general, though, many destinations in this inner northern area have intense north-south service but little or no opportunity to circulate east-west.

Melbourne is coming late to grid network planning in part because of its own planning history, but also because it is such an exceptionally centralized city.  Its huge commuter rail network is totally radial and its extensive tram network also has only a few non-radial elements, all in the inner east and south.  The regional information provider, Metlink, does not attempt a frequent network map, so I’m glad that Peter did.  It helps me form an understanding of the underlying structure of how bus, rail, and tram work together on a citywide scale.

As an aside, Peter shares a bit of his struggles with the available media:

I started with scribbles on taped scraps of paper. Plain shower curtains from discount shops were then tried. Windows Paint worked but smeared badly with each alteration. Finally Power Point was found workable.

Commenter Evan suggests Visio is the right tool.  What do people think?

In any case, it’s rare to get this kind of glimpse of an artist’s working process!  I too have struggled with shower curtains in the pursuit of beauty, but would be too shy to write about it here.

Seattle: Notes on the “Snowpocalypse”
Basics: Finding Your Pulse

You are here: Home › Melbourne: A Frequent Network Map