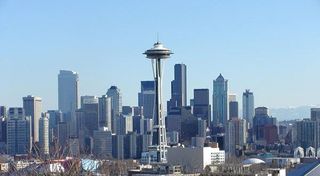 As Seattle moves into the recriminations phase on last week’s snowstorm, locally known as the “snowpocalypse,” let’s put some things in perspective:

Seattle has a particular vulnerability to snow and ice that is unique in North America.  The uniqueness is in the intersection of four factors:

So I would suggest folks go easy on the Seattle Department of Transportation, which is responsible for snow clearing, salting, etc.  (Full disclosure: SDOT is a former client of mine.  I do have friends there, but I haven’t spoken with them since the storm.)  First of all, not even Minneapolis can deliver an incident-free evening rush hour when a winter storm hits at 4:00 PM, as it did in Seattle this year.  But more important, Seattle needs to relax into the futility of even attempting normal daily life in such a situation.  Adam Parast argues, intriguingly that rare snow days may be an opportunity for Seattle to rehearse life in a more resource-constrained future.  And as commenter Rob Fellows put it:

It seems that most people believe it’s the city’s responsibility to ensure that life goes on exactly as usual in a snow emergency. Metro has improved their snow response dramatically this year compared to two years ago, but is skewered in the press because an eighth of their fleet is sidelined and they don’t have real time arrival tools that work on snow routes.

What I take away from it all isn’t that it’s futile to get around in snow in Seattle; it’s that people here have no perspective! There are forces bigger than us on earth! There are more important things in life than our daily routine! For goodness sake, what a wonderful thing snow is – particularly because it makes us pause and take a moment to admire the wonder of nature at work.

23 Responses to Seattle: Notes on the “Snowpocalypse”

You are here: Home › Seattle: Notes on the “Snowpocalypse”