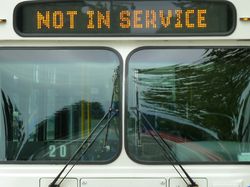 The British/Australian term “dead running” means “running out of service, unavailable for passengers.”  I like the term because it could be the title of a zombie movie.  I look forward to seeing if it attracts hits.

The North American term is “deadheading,” which may remind you of rock fans of a certain era.  In both cases, the word “dead” is apt.  It’s a waste, a loss.  It’s unavoidable up to the point, but transit agencies are always trying to turn dead time into live, useful time.

The Brisbane Times has a piece by Marissa Calligeros announcing that ’28 per cent of bus services are “dead running”, where passengers are unable to board.’  That’s a confusing way of putting it.  The reporter must mean that Brisbane buses are dead running 28% of the time.

That sounds like a lot, but “dead running” is the result of two different issues that need to be kept separate.

There’s no way to understand Brisbane’s “dead running” issue, or that of any other city, without separating these two causes.  The Brisbane Times article talks only about the first, but the Brisbane bus system has a massive one-way peak due to its single dominant downtown and relatively lack of direct rail paths for much of the city.  Can dead running be better addressed by a rigorous review of whether these one-way peak services can be combined, replaced by links to rail, or otherwise made more efficient?  GIven the higher cost of dead running for one-way peaked service, could some of it be converted into two-way, all-day service at less expense than it would first appear?

That’s an important question for any city.  Details of driver costs vary, but in general, dead running is one of the main reasons that one-way express service (bus or rail) can be more expensive than it looks.