You know you're a transport geek when you find yourself at a 9 PM debate about how governments should measure "urban mobility."

The opportunity arose one night at the Congress for the New Urbanism conference in Madison last week.  Long after most urbanists had adjourned to the bars and restaurants, a small but sharp audience gathered to hear Tim Lomax of the Texas Transportation Institute (TTI) debate Joe Cortwright of CEOs for Cities.  Tim was there to defend TTI's influential Urban Mobility Report (UMR), an annual compendium of statistics that are widely used to define how US cities think about mobility problems and to benchmark these cities against each other.  Joe was there to attack TTI's methodology as biased against compact, sustainable cities.

This ratio inevitably gives "better" scores to cities where normal uncongested travel times are pretty long — in other words, spread-out cities.  Here's the CEOs' critique of how the TTI compares Charlotte and Chicago: 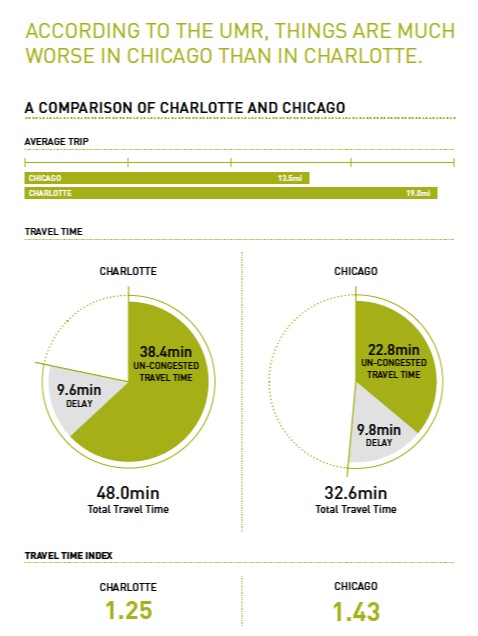 This index certainly looks hard to defend as any useful measure of travel time, even by car.  Two cities that expose the average motorist to near-identical amounts of congestion delay are being scored entirely based on how far people have to drive there, where "further" means "better" on the travel time index score.

In his rebuttal, Lomax emphasized that Institute doesn't stress its Travel Time Index as much as it used to.  He even offered a table showing the number of times his report mentioned the index in each successive year (plenty in the 90s, but way down in the late 00s.)  We were to conclude that critiquing the Travel Time Index is a 20th century battle.

The real problem, of course, is TTI's title, "Urban Mobility Report," for a document that's really mostly about congestion.  Only if you live in a very car-dependent city, or care only about car-dependent citizens, can you reduce mobility to congestion in that way.  A more truthfully titled "Urban Congestion Report" would raise no objection.

Lomax argued that his insititute is interested in the other modes and wants to be able to talk about them more effectively, and I'm sure that's true.  It's also true that nobody can be responsible for what journalists and editors choose to emphasize in reporting about their work.  It may well be that journalists continue to fixate on the Travel Time Index more than the Institute itself wants them to.

But look at how the TTI's own website introduces its most recent study:

The 2010 Urban Mobility Report builds on previous Urban Mobility Reports with an improved methodology and expanded coverage of the nation's urban congestion problem and solutions. The links below provide information on long-term congestion trends, the most recent congestion comparisons and a description of many congestion improvement strategies. All of the statistics have been recalculated with the new method to provide a consistent picture of the congestion challenge. As with previous methodology improvements, readers, writers and analysts are cautioned against using congestion data from the 2009 Report. All of the measures, plus a few more, have been updated and included in this report.

Mobility is in the report title, but this entire leading paragraph is about congestion.  If you dig into TTI's full press release about its 2010 report, you also find that it's all about congestion except for this curious paragraph:

The congestion reduction benefits of two significant solutions are discussed—public transportation and roadway operations. Without public transportation services, travelers would have suffered an additional 785 million hours of delay and consumed 640 million more gallons of fuel—a savings of $19 billion in congestion costs. Roadway operational treatments save travelers 320 million hours of delay and 265 million gallons of fuel for a congestion cost savings of $8 billion.

The journalistic spin that TTI itself recommends is that non-car modes matter only if they reduce congestion, and that congestion remains the primary measure of urban mobility.

What's more, TTI's suggestion that public transit directly reduces congestion is actually quite fraught, and many transit experts, including myself, steer away from it.  Transit certainly creates alternatives to congestion for individuals, and the resulting benefit to individuals can be aggregated to describe society-wide improvements in both productive time and personal/family time.  But those calculations are much more clear and direct than any "transit benefit to congestion" overall.  That's because newly freed, high demand road space tends to induce new car trips.

Could a real "Urban Mobility Report" have value?  Yes, but it would look totally different from TTI's, and it wouldn't be easy.  Creating mobility measures that work across all the modes — cars, walking, cycling, transit etc — is fiendlishly difficult.  I have some notions about how it might be done, but it would have to start with the right question.  If you're going to talk about true urban mobility, then surely you have to ask questions like:

Or perhaps even more powerfully:

Any methodology that focuses on the performance of a single mode — whether congestion on freeways, continuity of cycle networks, or reliability of transit — is not going to lead us that way.

Given the resources and credibility that TTI has, I really hope they move in this direction.  But it won't be easy.  If the TTI report continues to be about congestion, that's another choice, but in that case their "Urban Mobility Report" will be a report of declining relevance (and increasingly offensive title) as this urban century unrolls.

You are here: Home › that influential texas “urban mobility report”