Here's a shot of an edge city from the new SimCity. Notice what's missing? 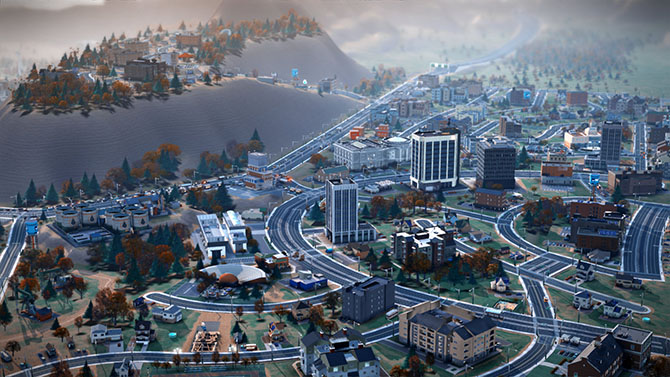 Geoff Manaugh: While you were making those measurements of different real-world cities, did you discover any surprising patterns or spatial relationships?

Librande: Yes, definitely. I think the biggest one was the parking lots. When I started measuring out our local grocery store, which I don’t think of as being that big, I was blown away by how much more space was parking lot rather than actual store. That was kind of a problem, because we were originally just going to model real cities, but we quickly realized there were way too many parking lots in the real world and that our game was going to be really boring if it was proportional in terms of parking lots.

Manaugh: You would be making SimParkingLot, rather than SimCity.

Librande: [laughs] Exactly. So what we do in the game is that we just imagine they are underground. We do have parking lots in the game, and we do try to scale them—so, if you have a little grocery store, we’ll put six or seven parking spots on the side, and, if you have a big convention center or a big pro stadium, they’ll have what seem like really big lots—but they’re nowhere near what a real grocery store or pro stadium would have. We had to do the best we could do and still make the game look attractive.

In other words:  SimCity deliberately misleads players about parking because if they showed parking in its true dimensions, it might make dysfunctional land use patterns look (and act) dysfunctional.

And we can't have that.

Sim City contains other examples where the real math underlying how cities work is distorted to appeal to supposedly prevailing prejudices, but few are as egregious as this one.  Practically any working urban planner will tell you that managing parking, without a SimCity tooth fairy that builds it for free underground, is a dominant factor in urban form and perhaps the biggest single obstacle to denser and more sustainable forms of development.  Change that assumption, as SimCity does, and you're working in fairyland.

And it's refreshing to hear the designer confess that the distortion is intentional — a lie rather than a confusion.

Game makers can say it's only a game, just as movies that glorify violence are only movies.  But like movies, seemingly realistic and immersive simulation games teach people to misunderstand how the world works in a way that makes them less effective in dealing with the world.  Of course, SimCity has been doing this  – with an explicitly anti-urban bias that belies its name — since the beginning.

using development charges as a transit funding mechanism
streetcar in atlanta: cool, but is it useful?

You are here: Home › how sim city greenwashes parking