Posted on August 14, 2009 in Philosophy, Technophilia

Last night, on the treadmill at the gym, I watched a bit of a National Geographic Special on the maglev train that connects Shanghai’s airport with its city center.  Most of it was about the engineering challenges of the project, and the many small dramas of solving them. At the end of the piece, we viewed the train from above as it rushed away on its elevated guideway, while the narrator said something like:  “But the future of the maglev train is very much in doubt.” 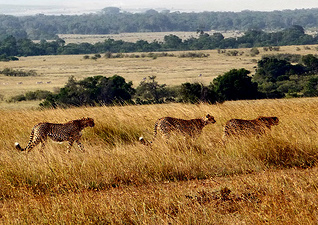 That explained the déja vu I was feeling.  At some point long ago, I’d heard those words — “its future is very much in doubt” — in that same firm and resonant baritone, as I watched a cheetah — the world’s fastest land mammal — running into the distance from exactly this camera angle.

Finally I saw what the show was about.  We are meant to care for the maglev exactly as we’d care for a charismatic endangered species.  We’re to feel a specific motivating awe for the maglev because it’s sleek, fast, muscular, intense and yet, for all that, endangered, just like the cheetah.  We’re to believe that because this fast-moving yet inanimate object is the product of human engineers, the sentience of those engineers is there in the endangered thing itself, vulnerable to our judgment, just like the cheetah.

I don’t believe that.  I don’t care about powerful-but-vulerable transit technologies in the way I care about cheetahs.  What’s wrong with me?

Words I Deleted Today
On Monorails