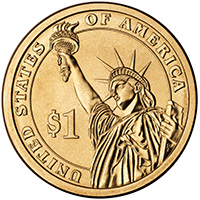 On my post about the transit speed benefits of abolishing the US$1 bill, many commenters re-emphasised that $1 coins do exist.  The US Mint wants to promote them, but that they are failing to catch on with the public.   Cashiers encounter resistance when they give them out in change.  The resulting back and forth with the customer takes far more time than it’s worth, so even a cashier with revolutionary impulses learns it’s just easier to give out dollar bills.
I wonder if a concerted high-visibility campaign in one transit-intensive US city might drive the issue to prominence.  It wouldn’t even need to come from the government.  Suppose, for example, that one prominent locally-based merchant in, say, San Francisco announced that from now on, they’d be giving out only $1 coins as change.  This could be one of those good-corporate-citizen moves, designed to support transit patronage by putting dollar coins in people’s pockets.   (I suspect they would also find that the change would result in faster service for the merchant’s customers, since coins are faster to grab and count than bills.)
Why has nobody done this by now?  Was it tried, and if so, what was the resistance?  It clearly would need to be a campaign, with some media buzz so that customers knew what to expect.  But I have trouble imagining that the resistance would be so great in a place like the Bay Area.
Meanwhile, be the change you seek.  From commenter “Calwatch”

Like one of the above posters said, the best way to show your support is to buy the coins and spend them. Luckily, the US Mint is selling them – $250 at a time – on your credit card.

Some enterprising people have used their 2% cash return credit cards and are just ordering boxes of them and wheeling them direct to the bank, thousands of them at a time, which defeats the whole purpose of the program. But, if your transit agency doesn’t accept credit cards, you can get these “tokens” at a 1-2% discount, depending on what credit card you have.

Place your orders here.  (And no, I don’t get a percentage.  You’ll notice I don’t even have a tip jar.)

30 Responses to The US$1 Bill Abolition Campaign Begins with You!

You are here: Home › The US$1 Bill Abolition Campaign Begins with You!