The current generation of urban designers may like to complain about NIMBYs, but urban designers and NIMBYs can be counted on to agree on one thing:  Elevated transportation infrastructure is a bad thing in an urban setting.  Urban design today focuses on activating the ground plane and maintaining its visual connection to the sky.  Even pedestrian bridges are out of fashion, while a new continuous elevated structure would be hard sell in the urban core of almost any major city.  The Seattle Monorail Project (1996-2005) proposed a very thin elevated structure, but even this was a flashpoint of controversy when it got close to existing buildings.

It may be true that we don’t know how to build viaducts anymore and that the freeway era has traumatized a whole generation into reacting badly to absolutely anything new up in the air.  And I’m not sure that’s a bad thing, but …

But before we decide for sure, take a walk with me along Berlin’s Stadtbahn. 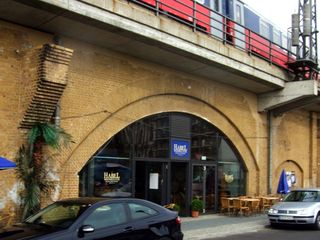 A remarkable amount of Berlin’s rapid transit system is elevated, in a range of viaduct styles.  These lines are a delight to ride because of the continuous views they offer.  But of course the real test of a viaduct is what it’s like to be under or next to it.  Often this isn’t a big issue because these segments run along the medians of very wide boulevards, just like the U6 viaduct in Vienna, so nobody has to live right next to or under them.

But the Stadtbahn is something else.  Completed in 1882, it runs east-west right through the middle of the city, with all kinds of urban land uses right next to it.  It’s a major visual presence in many of Berlin’s iconic sites, from affluent Charlottenberg to the Frederichstrasse shopping core to the “downtown of East Berlin,” Alexanderplatz.  It even skirts Berlin’s great central park, the Tiergarten, and looks down into the zoo.  If you were proposing to build it today, virtually every urbanist I’ve ever met would instinctively hate the idea; if the idea somehow got past them, the NIMBYs would devour it.

The most visually sensitive segment traversed by the Stadtbahn is between the main rail station and Alexanderplatz.  Here the viaduct skirts the core government zone — an area of intense national symbolism and architectural sensitivity — and then runs very close to Berlin’s main river, the Spree, through a cluster of cultural institutions.  It even comes right out on the river at one point, briefly walling it off. 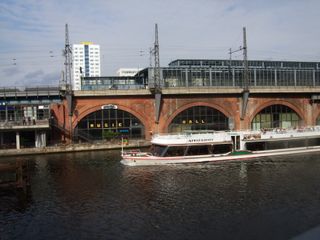 In short, it goes all the places that we would least want a viaduct to go.

Yet much of it is beautiful. Most of the viaduct is built as a series of brick arches.  Each arch is large enough to contain rooms. Today many of these are retail space, most commonly restaurants.  These restaurants put their tables outside, sometimes facing a park but still, unavoidably, right next to the viaduct, and they’re very pleasant places to be.  A train clatters overhead every minute or two, but it’s not dramatically louder than the other sounds of urban life, so it’s a comfortable part of the urban experience, devoid of menace.  I could sit in such a place for hours. 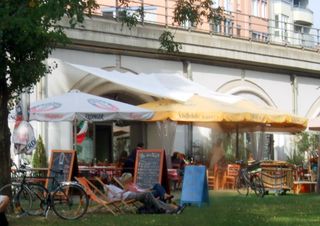 In some cases, the commercial street next to the station is activated, in part, by all of the businesses occupying the arched rooms under the viaduct.  At Savignyplatz, one of Berlin’s best architectural bookstores is in such a space.

Stations on the line are substantial.  They are integrated into surrounding buildings and with plenty of ground-level retail, but they are unavoidably dominant presences in each district. 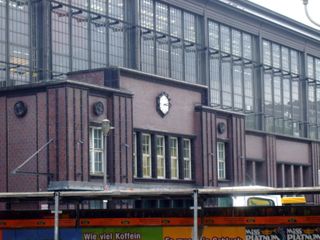 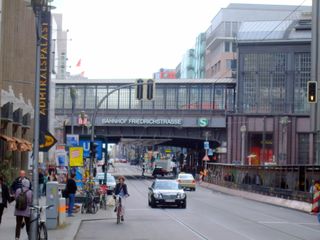 Of course, one key feature of the Stadtbahn, compared to most recent freeway or transit viaducts, is that its underside is closed off except where it crosses a street.  There is no continuous under-structure space that would be a depressing presence in the neighborhood below.  Instead, the Stadtbahn is a continuous wall, pierced by streets but otherwise mostly enclosed to create spaces that can be useful in various ways.  Obviously, when crossing a sensitive area such as a marshland, the arches can be open; it depends on what works in each segment.

Europe has some really beautiful transit viaducts, including some in the dense centres of cities.  Most of them are a century old, so the city has partly grown around them.  But the effect is sometimes so successful that I wonder if we shouldn’t be looking more closely at them, asking why they work, and whether they still have something to teach us about how to build great transit infrastructure. 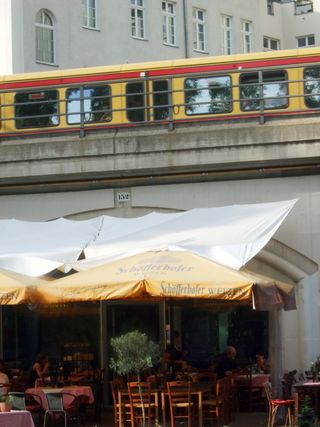 I’m not proposing a specific one, just wondering if we should open this door a bit.

What I’m Seeing in Europe: Service Before Technology
Failed Welcoming

15 Responses to Viaduct Love in Berlin

You are here: Home › Viaduct Love in Berlin