Given the passions that surround the streetcar in North America, it’s interesting to travel in Germany, where there are lots of streetcars, and lots of buses, and not as much focus on the difference between them.

Berlin, for example, presents its system this way:

Obviously the important point here is the Metro-Netz definition, which focuses on the quantity and type of service — promising local-stop service that runs very frequently all day and evening.  Both buses and streetcars/trams can provide this service, and they encourage you to focus on the service, not the technology. 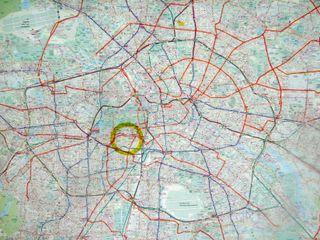 So for example, this map, which appears in many shelters and stations, has blue/green lines for rapid transit (S+U Bahn) and orange lines for all of the Metro-Netz, regardless of whether it’s bus or streetcar.

(The particular importance of this approach in Berlin is clear from a map of the streetcar network only.  The streetcar network lies almost entirely in the former East Berlin, because West Berlin replaced its trams with buses.  Despite all the tremendous work to reunite Berlin’s transport network after reunification, the fragmented streetcar network remains the last artifact of the city’s division that can still interrupt logical corridors of travel today.)

I’ve observed a similar branding emphasis in several cities in Germany, and also in Bern and Brussels, where I am now.  A couple of days ago, I was at in front of the train station in Heidelberg waiting next to some streetcar tracks.  Several lines stopped there, each with a two digit number.  There was plenty of information about where each route went, and an electronic display showing when the next one was coming. 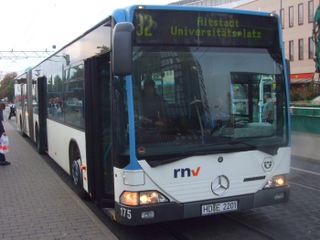 But when my service arrived, it turned out to be a bus.   It drove up on the lane containing the tracks, stopped at the stop, and drove on, following the lane+tracks until the tracks branched off into the grassy median.  It was a very nice bus, low-floor, high windows, quality seating, and all the information systems that you’d expect on a modern high-tech transit vehicle.

If you have strong feelings about the streetcar vs bus distinction, and feel that Europe is doing well because they have lots of streetcars, it’s important to notice this fact about how some of the best European systems present their service.  In Europe, it’s possible to find out about the routing, frequency, travel time, and next trip on a line, and go wait for it, all without knowing whether it’s a bus or a streetcar.  From there, it can be a short step to not caring.

The European cities I’ve visited love the streetcar technology, and so do I.   But they use it where it’s the best way to serve the market, rather than because it’s a symbolic step up in quality or comfort that will make people ride.  They understand the crucial role of buses and are working hard to make the bus as attractive as the streetcar; their information systems emphasize the similarity of the two modes rather than their difference.  They do that because their primary goal is not to promote streetcars but to provide an attractive system for everyone, and streetcar technology can’t go everywhere that people deserve good transit. 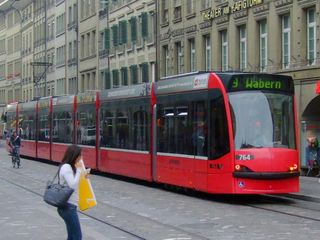 Where the streetcar is the best way to deliver mobility, they use it.  One excellent reason to build a streetcar is capacity; European ones are often very big, much bigger than an articulated bus.  The longest I’ve encountered is this one in Bern, around 40m long with seven articulated sections and one continuous interior space.  Its standing capacity must be around 300.  Obviously, if you need a vehicle that big, you should build a streetcar line.  And while Bern does have excellent electric trolleybuses, there are probably cases where the electric supply and emissions issues argue for streetcar technology.

What I see in Germany and surrounding countries is a sophisticated public transport system focusing on abundant access outcomes, and using whatever technology best delivers those outcomes in each corridor.  I see information systems such as Berlin’s where the branding isn’t about streetcars and buses, but about a particular level of mobility.  In this case, Berlin’s Metro-Netz presents what I call a Frequent Network brand, isolating and emphasizing services that you can count on to come soon, at almost any time of day or evening.  It might come on tires or it might come on rails, but either way it’s a high-quality, high-amenity service, and they want you to count on it.

Berlin: A New Use for the Brandenburg Gate
Viaduct Love in Berlin

24 Responses to What I’m Seeing in Europe: Service Before Technology

You are here: Home › What I’m Seeing in Europe: Service Before Technology