In my book Human Transit, I argued that the underlying geometry of transit requires communities to make a series of choices, each of which is a tradeoff between two things that are popular.  I argued that these hard choices are appropriate assignments for elected boards, because there is no technical ground for making one choice or the other.  What you choose should depend on what your community wants transit to do.  Examples of these choices include the following:

Note that while the framing of these choices tends to make them sound binary (“Ridership or coverage?”) the choice is not between two boxes; it’s of a position on the spectrum where the two terms define the extremes.  You don’t have to choose between ridership or coverage, for example, but you have to choose a point on the spectrum between them, and you have to accept the mathematical fact that, as on any spectrum, moving toward one extreme implies moving away from the other.

In the Epilogue of HT I briefly introduced the idea that for each of these choices, one option seems to trigger a positive-feedback loop, while the other option does not.  Here is a new and expanded diagram of that idea.  The image below is fuzzy, so download here:    Download Abundant access diagram streamlined ’15-05-08  (Tip: Print it on A3 or 11×17.  There’s a lot here.) What do I mean by positive feedback loop?  On each of these choices, the option that points toward the center leads to a particular kind of network that supports all of the goals implied by all the centerward choices.  For example, if you plan your network for maximum ridership rather than coverage, you also generate a network that encourages higher walking distances, that supports easy connections rather than complexity, and that tends to present the strongest case for facilities that protect transit from congestion.

On the other hand, the options that point outward from the center tend not to support each other.   You can achieve the goal implied by these outer choices, but (arguably with some exceptions) each one will require a separate effort.  For example, if you believe walking distances to transit should be low, as seniors tend to advocate, then you need to put parallel transit routes — and the stops on those routes — very close together.  This does nothing to advance any of the outer “outward” goals, whether it be growing peak demand, or avoiding connections, or achieving a luxurious experience that will compete with a BMW.

What happens when you move toward the center?  These choices converge on a single, consistent goal that I propose to call Abundant access, which means:

[Why 30 minutes?  The question is tangential to my point, and other figures could be used, but if one has to pick a figure the most solid basis is Marchetti’s constant [PDF], the idea that humans throughout history have tolerated about one hour of daily travel time.  Obviously, shorter or longer periods may apply to trips other than the commute.]

For any individual, abundance of access can be visualized using a map of isochrones, like this one by Conveyal for downtown Portland, which shows the area you can get to within a fixed amount of time on some combination of transit and walking. 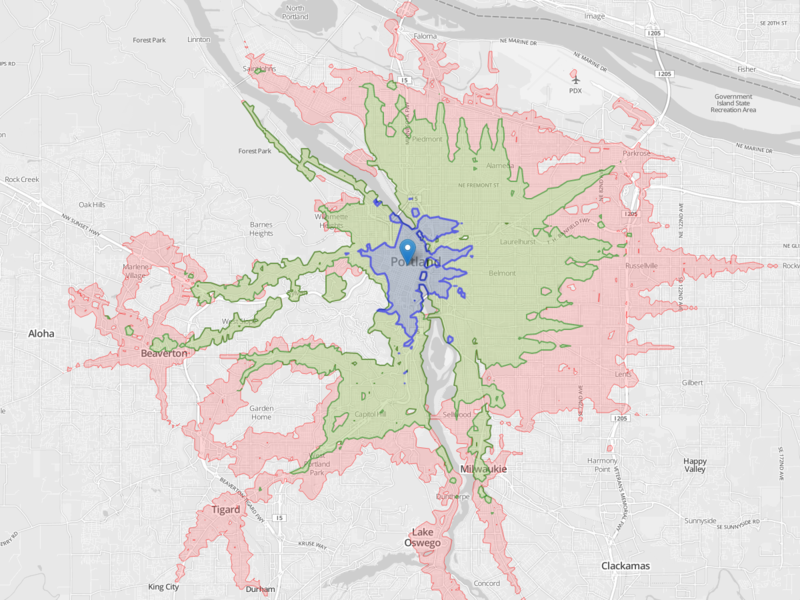 (In these maps, blue is a 15 minutes travel time, green is 30 minutes, and pink is 45 minutes.  Unlike some imitators, these calculations include waiting time and therefore accurately convey the impact of frequency.)

Of course, any quantification of abundant access must consider not the area but the amount of stuff in it: jobs, retail, recreational opportunities, hospitals, all the things that form the universe of destinations.  As a matter of public policy, it must also maximize over the largest possible share of the population.  In the case of transit, the population over which abundant access is most cost-effectively maximized tends to be a more urban, high-density population, because among readily available measures, density is one that best predicts the intensity of ridership that will arise from a service investment.  (Fortunately, that’s fairer to than it sounds, because people living at high densities use much less road infrastructure per capita than people living at lower densities.)

The goal of abundant access has several kinds of appeal.

First, it can be measured objectively without recourse to psychology or culture.  Ridership estimates are based heavily on travel times that approximate the notion of abundant access, but they also add psychological factors that are less stable, such as observed preferences for particular technologies.  These factors may be emotionally vivid, but like many emotional factors they are likely to change with time and especially with generations — just as emotional attitudes toward cars are changing now.  Abundance access measures a fact that is entirely objective — travel times.  Unlike emotional reactions to technologies, the value of access has been constant across millennia of human experience.

Second, abundance of access is literally a quantification of freedom, in the sense that matters to us in transportation.  Isochrone maps like Mapnificent’s, in particular, show us our freedom in a very immediate way: here is where you are free to go, now.  Abundant access measures the transportation element of opportunity of all kinds, which is one of the main reasons people have moved to cities since their invention.

The concept of freedom is sadly undervalued in much urbanist discourse, and I am always looking for ways to reintroduce it.  Much urbanist writing, for example, is blatantly prescriptive (“you should want this kind of community”), which feeds conservative stereotypes of urbanism as manipulative or coercive.  We need to be able to talk not just about ideal communities but about freedom and personal responsibility, a frame in which all the great urbanist ideas — and all the urgent environmental imperatives — can be stated equally well.  In that frame, the key idea is not “the good” but “choice,” where freedom of choices also implies responsiblity for your choices.

So again, all of this work is descriptive, not prescriptive.  I’m not saying that you should like the goal of abundant access; that would be value judgment, and you get to make those for yourself.

I am saying, though, that abundant access as an idea has certain features and consequences, including a tendency to be self-reinforcing.  As mapped along the various axes of choice, abundant access is a single consistent vision whereas the opposite choices lead to many unrelated visions.

Still, you don’t have to like it.  My role, as always, is to describe consequences clearly, and help people choose.

26 Responses to “Abundant Access”: a map of a community’s transit choices, and a possible goal of transit

You are here: Home › “Abundant Access”: a map of a community’s transit choices, and a possible goal of transit