You’ve seen pictures of Berlin’s Brandenburg Gate.  It’s Germany’s equivalent of the Arc de Triomphe in Paris, but in a Neoclassical style. 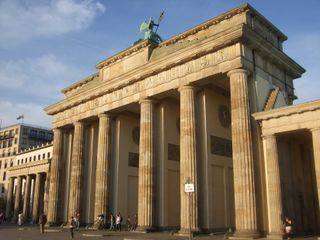 Lately, Berlin seems to have a new use for its icon: 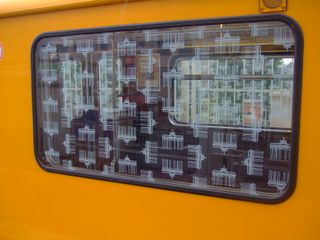 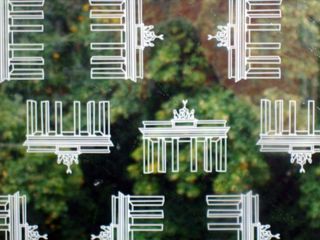 About half of the U-bahn cars have these stencils covering their windows.

I’m not sure but I suspect this is meant to discourage window-scratching, an especially destructive form of “tagging.”  The theory here is that taggers are drawn to blank surfaces where their work will be legible.  If that’s the purpose, it may be working; I saw only one window that had been scratched despite the stencils, and the tagger was clearly trying to adapt to the remaining blank space.  (On principle, I don’t post photos of tags; tagging is all about personal publicity, so posting a photo of a tag would make me the tagger’s accomplice.)

It’s not nearly as obtrusive as a wrap nor is it as profitable, but it’s still not something I’d recommend.   Now and then on a gray day a glimpse of the city between Brandenburg Gates can be intriguing, even romantic … 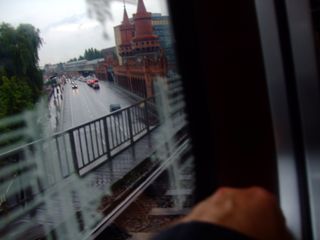 … but mostly the cure seems worse than the disease. 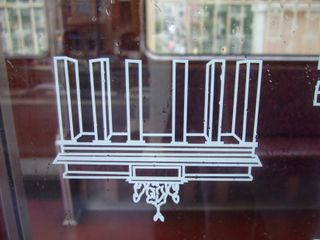 The Other Meaning of “High-Speed Internet”
What I’m Seeing in Europe: Service Before Technology

2 Responses to Berlin: A New Use for the Brandenburg Gate

You are here: Home › Berlin: A New Use for the Brandenburg Gate