Posted on October 8, 2009 in Architecture, Basics 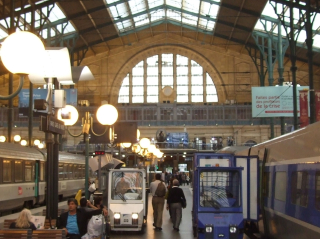 In an end-station such as Paris’s Gare du Nord (pictured), trains arrive in a stub-end track and must reverse direction to go back out.  It’s a nuisance for the trains and their through passengers but it’s great for customers as pedestrians.  They don’t have to deal with stairs, escalators or lifts, but can just walk forward, past the end of the train, into the main station space.   End stations offer the possibility of a continuous flow, at the same level, between the train, the platform, the main hall, and even the street.

(That we so often experience end-stations as great places suggests that our bodies, adapted for African savanna, really don’t like descending into tunnels, because we don’t like going anywhere that we can’t see clearly.  The great station hall is the savanna, but the tunnel is more like the jungle, enclosing, disorienting, full of unknowns.) 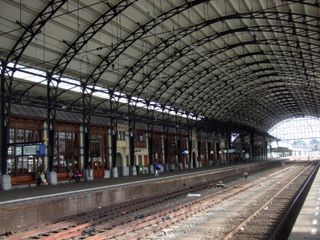 In a through-station such as this typical one in Haarlem, Netherlands, the tracks must continue on both sides of the station, so each platform is just a space between tracks, accessible only by a change of level: stairs, escalators, lifts.  But it’s worse than that.  The change of grade from the tracks is usually downward, delivering us to an underground passage that must be moved through to get to any sort of larger space.  Arrival in such stations is typically a confusing sensation.  In a tunnel, signs are your only form of wayfinding, while in a large open space of an end station, you can actually see where you’re going much of the time.

On a deeper level, the sensation of an end-station is that the entire space is devoted to arrival and departure.  In a through-station, the focus of the design is the convenience of all the people riding through the city on the train.  In other words, an end-station is all about arrival and departure in your city, while a through station is really about arrivals and departures elsewhere.  End stations, then, magnify a city’s importance, while through-stations subliminally diminish it.

So is it surprising that the largest, oldest capitals of Europe tend to have end-stations?  The largest of all, Paris and London, each feature a distinctive ring of end-stations serving trains to different parts of the country.  Until recently, a traveller who just wanted to get past Paris or London — someone going from Lyon to Rouen, say, or from Brighton to Cambridge — had to make a double-connection to get across the capital, going from one city end-station to another via the city’s rapid transit system.  To be an obstacle is to insist on your importance, and Paris and London were certainly obstacles to these travellers. (The idea that it actually might be good for some trains to bypass Paris and London has only gotten traction in the last decade, partly in the context of new pan-European network ambitions that are transcending the capital-city focus of national network thinking.)

End stations also happened because the pre-rail fabric of the city was just too large or valuable or symbolically important for a new rail line to cut through.  Paris and London, of course, were already Europe’s largest cities in the first rail-building era, but for the same reason you’ll find end stations in Vienna, Bern, Budapest and Rome.  If you take a German ICE train from Berlin to Interlaken in the Swiss Alps, your train will reverse direction twice, once at Frankfurt and once again at Bern, because both are end-stations, each for a good local reason.  You may hate the fact
that your train reverses direction partway through your trip, but that’s the tradeoff that comes with an end-station.

What great cities have through-stations?  Berlin and Brussels stand out, both capitals of late-developing, shifting, and sometimes divided countries.  Both are on the way to a lot of other places, so through-stations make sense, but of course the same could be said of London or Paris, where the end station reigns.

Brussels was always on the way between France and Holland, and somehow that fact was always more important than Brussels’s need to insist on its own obstructive greatness as a capital.  So the main train line goes right through the city, mostly on viaduct, and its major stations, Noord/Nord and Zuid/Midi, are unlikely to be on anyone’s list of world-class rail station experiences.

Berlin made an early investment in the Stadtbahn, which runs right across the city and serves both local transit and intercity trains.  It’s continued to develop in the same way, with a large grid network of main lines — often shared by intercity and local trains — that all have through-stations.  I suspect this has to do with the fact that Berlin, a recent invention, has always had multiple centers at some distance from each other, so that a train really had to run across the city in order to have completely arrived there.  Intercity trains usually make two or more stops in Berlin, because the city is so large and multi-centred.

A similar dymanic is at work in Amsterdam, because although the city itself has a very clear center, Amsterdam is not the single pre-eminent city in Holland.  The Dutch speak of a multi-polar urban constellation they call the Randstad, which incorporates Amsterdam, Schipol airport, Haarlem, Leiden, Den Haag, Delft, Rotterdam and arguably Utrecht.  The whole Randstad is less than 60km across — an hour or less by train, not much larger in area than Berlin.  You might think America invented the multi-centered “megalopolis,” but Holland has had this structure — many small cities very close together — for centuries, and the structure has served them well as an aggregate capital and metropolis.

So it’s logical that most Dutch cities have through-stations, just as Berlin does, because people are flowing through them to so many different nodes in the larger constellation.  In fact, if you were going to compare sprawling multi-polar Berlin with anything in Holland, you’d compare it to the entire Randstad, not to Amsterdam alone. So it makes sense that both Berlin and Holland’s Randstad are constellations of through-stations.

What can be done with through-stations, where the larger geography requires them?  I have rarely, in all my travels, had a completely delightful experience going down from a rail platform into the inevitable tunnel beneath it.  On arrival, a passenger wants to get to a station hall where navigation is self-evident.  In a tunnel you have to rely on signs, but in a well-designed main hall you can actually see many of the things you might want.  It’s our nature as savanna animals to want to see where we’re going, so the station hall is just a better fit.  The ability to deliver the arriving passenger directly into the main hall is the end station’s great virtue.

Obviously, if a station is being designed from scratch, decisions can be made about proportions to make the tunnel less tunnel-like, even just by making it larger.  Berlin Hauptbahnhof, for example, is a through station but the level beneath the tracks has a very high ceiling with ample sunlight coming in from the sides, so it doesn’t really feel like a tunnel.  This is probably one of the world’s most successful major through-stations because of its ample dimensions and light. 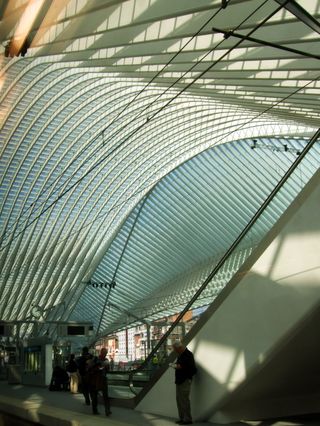 I’m surprised that so few through-stations are designed with overpasses rather than tunnels, so that an arriving passenger goes up from the platform rather than down.  This is how Santiago Calatrava’s flashy new Liège Guillemins station in Liège, Belgium seems to work (pictured).

Why are overpass designs so unusual in through-stations?

Getting Beyond Paris (or Your City)
The Urbanophile on Chicago: From Good to Great?

39 Responses to Arrival by Train: How End-Stations Differ from Through-Stations

You are here: Home › Arrival by Train: How End-Stations Differ from Through-Stations