Sparked in part by a suggestion from a reader, I spent two days last month in Karlsruhe, a pleasant but not touristed small city in the southwest of Germany.  In rail transit circles, Karlsruhe is famous for inventing “tram-trains,” a vehicle and service type that can operate in the street as a streetcar/tram, but can also go onto standard railway lines, often shared with intercity passenger rail and freight, to go longer distances into the surrounding suburbs.  This means that the service you board in your outer suburb can flow right into the city’s core streetcar network, and  get you closer to your inner-city destination than the train station would be; thus saving you from having to make a connection.

This may seem like not much of an invention, but rail engineers will tell you it’s harder than it looks, especially because the crash-worthiness standards that you need to meet to share tracks with freight tend to conflict with the relative lightness than you want in a streetcar.

(Language note:  “Streetcar” and “tram” mean the same thing, but since we’re in Europe here I’m going to tend to use the European word “tram.”  Don’t get confused.)

But like many great transit ideas, the innovation is hard to photograph.  All I can show you is a fairly ordinary-looking light rail vehicle running as a tram through a pedestrian precinct… 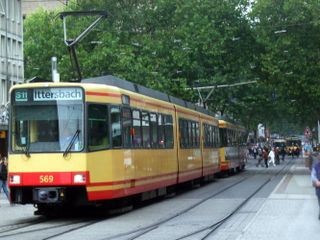 … and then running in a commuter rail mode at a suburban station. 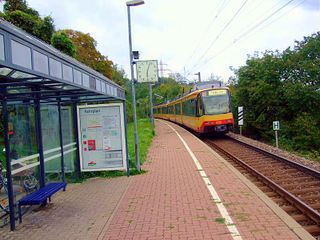 Because Karlsruhe’s model is being exported to other cities, however, the best service I can offer here is notice how few cities the idea would really apply to and what’s been sacrificed to achieve the tram-trains’ benefit.

Karlsruhe is a small city, about 300,000, with a very strong single downtown (including a major university) and not much to compete with it elsewhere in the city.  The geographical problem that drove the tram-train invention is that this urban core is about 2 km from the main rail station.  This separation is a feature you’ll find only in pre-rail cities (developed before 1850 or so) or some poorly planned late 20th century ones.  In the main era of rail development, roughly 1850-1950, towns naturally grew up adjacent to railroad lines, and while the rail line itself tended to be an urban barrier, you typically ended up with a downtown that was adjacent to the rail station on at least one side of the tracks.

If the city was there before the rail line, and the rail line couldn’t get closer without disrupting other travel markets, then compromises often had to be made between a station site ideal for the town and one that was efficient for the through operations of the rail service.  (The same tradeoffs are made today, at many scales, whenever land use and rapid transit interact in a new town or transit-oriented development setting.)

Karlsruhe is such a place.  Founded in the 18th century, Karlsruhe is organised around a castle whose site was chosen to suit a royal ego rather than provide for efficient transportation, or for that matter, efficient anything.  Interestingly, unlike most pre-rail European towns, downtown Karlsruhe isn’t on a river either.  So although the downtown is very pleasant and pedestrian-dominated, it’s like a car-oriented town in this key respect: it’s oriented away from any efficient larger network of pre-car transport, either rail or river.  An organically founded city would never have happened like that.

So with that background, here’s a bit of Karlsruhe’s network diagram: 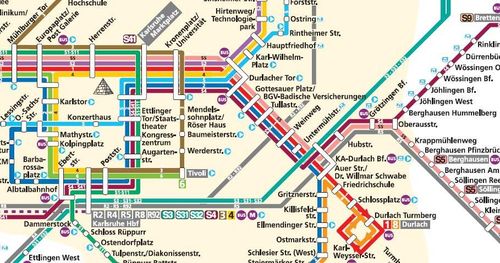 It’s very, very complicated, in part because there’s no effort to sort the system into a hierarchy that would show which services are frequent.  But the thing to notice is that most lines converge on the rail station (“Karlsruhe Hbf” in the lower left) and again on the downtown (whose focal point is “Karlsruhe Marktplatz” in the top-center of the image).  Many of these lines run in a frequent-stop streetcar mode through the core and then continue right out into the exurbia in the regional rail network.  (Lines that do this have numbers starting with S.)

When exploring a system that’s new to me, I often take an intentionally random trip.  I just get on whatever vehicle’s coming, and see where it goes and how it seems to work.  Here’s the trip I ended up takin, and the travel time (in minutes) for each segment.  Again, the rail station is in the lower left.  The “tram” segments are from the rail station up to “Downtown/Marktplatz” and then east to a point just before Durlach station — evident from the longer travel times.

At the rail station (lower left) I happened to get on an S4, the dark brown line on the network diagram.  First, the S4 goes north as a tram, covering the 2km into the center in 8 minutes. Then, it turns southeast and goes, still as a tram, about 3.5 km to Durlach station in 11 minutes.  The tram segments are in exclusive right-of-way but still very slow because it operates through so much shared pedestrian space.

But once you get to Durlach station (“KA-Durlach Bf” on the network diagram) the vehicle slides onto the rail network and speeds up, so it took only 7 min to cover the 6 km to Berghausen-Hummelberg, where I got off.  It’s a minor stop with not much more than a pad and a shelter (second photo above) serving low-density housing and open space.


On alighting, I noticed that I was on a single-track segment.  Bad news: that usually means low frequency.  Sure enough, the regular pattern of service back into the city was at :35 and :55 after the hour.  That’s uneven spacing, which is bad news too.  Two trains an hour should mean a maximum wait of 30 minutes, but here the maximum wait is 40.  I can’t think of many really good excuses for this.  Even though this line must merge with many others on a downtown segment, thus must find a space in a more crowded hourly cycle, it’s almost always possible to do this while maintaining regular spacing.  The likely explanation is that the schedule has to work around some kind of less-frequent intercity train movement sharing the same single track.  Such compromises are sometimes necessary, but it’s worth noticing what they cost for the customer.

Returning on the same line, I wanted to get back to the railway station, but that’s not what the S4 does.  It turns and goes through the city first.  What if I lived on the outer reaches of the S4 and just wanted to get to the  train station to go somewhere else?  The forced long ride through the city would have been a huge impediment.  In the event, I noticed that I could change at Durlach to a direct train back to station, called the S3.*  But I was looking at an all-routes map of Karlsruhe, when what I needed was a Frequent Network map showing me what services I could actually count on to be coming soon.  Would it be faster to change to the S3?  That depends on when it comes.  At that moment, standing on an S4 train staring at their network map, there was no timely way to know.  This is the sort of moment when complexity is a direct barrier to mobility.  As it happened, I got lucky.  The S3 came soon.  I got back to the station in just a few minutes instead of the 19 minutes it would have taken to ride the S4’s “tram” segment back through downtown.

Enough about my troubles.  What can we conclude about tram-trains and their value?

The crucial necessity that drove the tram-trains’ invention is that Karlsruhe is (a) a small city with (b) a fairly compact downtown that is (c) the primary destination for a large share of trips but is (d) a little too far from the main rail station where normal commuter rail trains would logically terminate.  Generalizing a little, I’d suggest that tram-trains make sense if:

Think about it this way.  Imagine you’re on the “train” portion of the service, cruising along stopping just once every km or so, like a typical rapid transit service.  Because of the relatively high speed, this service can be useful to a lot of people going to and from many different places, as long as they’re willing to change at one of these stations.  But now the train suddenly slows way down and begins making local stops and crawling slowly through pedestrian zones.  Suddenly, the service is no longer useful to anyone going further than this area, because you can only run really slowly for a few km before your travel time becomes unacceptable to someone going further.  So if you’re going to have a good load of passengers, they all need to be going to the area you’re slowing down for.  In other words, that area needs to be the only major activity center for the city, or the last you’re going to encounter in geographical sequence.


There’s a bit of “tram-train” in the design of many North American light rail systems, and the same principle applies.  For example, the Los Angeles Blue Line runs fast from Los Angeles to Long Beach but then very slowly on-street through the Long Beach downtown.  That’s OK in that case; nobody’s going beyond Long Beach, thus riding through this point, because beyond Long Beach is the ocean.  On the other hand, light rail systems that have slow on-street operation in the middle of a line (downtown Portland and San Jose, for example) do tend to be less attractive for people trying to ride beyond the slow segment.

The key issue with the tram-train, then, is that by running trains into slow, pedestrian-oriented tram lines, you make them useless for anyone who wants to go much further.  Once a train slows down to become a tram, it’s going to lose all its passengers within the next 3 km or so, because that’s the rough upper limit of how far people are willing to travel on a very slow tram (especially if they’re so time-sensitive that they really value the fast “train” part of the trip).  So everywhere that people may want to commute to needs to be along one line and in that distance.  In effect, that means one fairly compact downtown where almost everyone is going.  So you need a strong downtown that also contains your big university and medical complex, if you have those things, because those will both be big transit destinations.  I can’t think of many North American cities where this is still true.  The only Australasian city that begins to fit this description is Adelaide, which is planning a tram-train project.

That downtown itself must be compact or linear enough that all the lines can serve it in a way that gets everyone within walking distance of their destination.  (If they have to connect to another tram, you’ve lost the connection-avoidance benefit that is the tram-train’s whole purpose, and you might as well have just asked them to transfer from train to tram, as most cities do.)

If you’ve got all those features, tram-trains may well be for you!

*S3 is not a tram-train despite the number.  It’s the outer end of a Mannheim-based commuter rail line, and the “S” makes sense in Mannheim’s nomenclature, though it’s misleading in Karlsruhe’s.

Earthquake and Transformation
Berlin: Serene Images for a Hiatus

26 Responses to Karlsruhe: A Ride on the “Tram-Trains”

You are here: Home › Karlsruhe: A Ride on the “Tram-Trains”