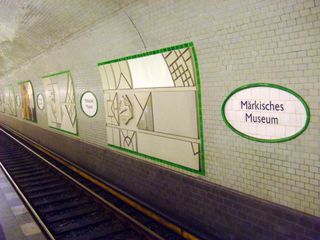 It’s going to be quiet the rest of this week on Human Transit.  I’m in Canberra all week doing full days of meetings to brief various stakeholders about the Strategic Public Transport Network Plan that I have been doing for them over the last two years.

While waiting for new material, these images from Berlin’s Märkisches Museum U-bahn station may serve as a calming visual hold-music.  (Click to enlarge and sharpen.)  They’re a series of artworks clearly based on maps of Berlin from different times of in its history.  German Wikipedia tells me that they’re the work of Jo Doese, Karl-Heinz Schäfer, and Ulrich Jörke, and that they were completed in 1988, under communist rule, the year before the wall came down.  I enjoy their Deco-like cool and serenity.  (click below to continue) 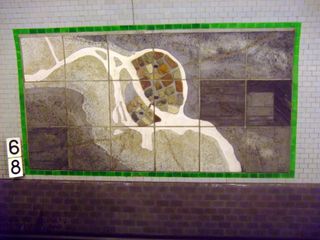 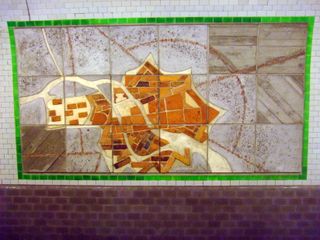 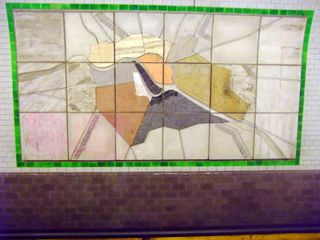 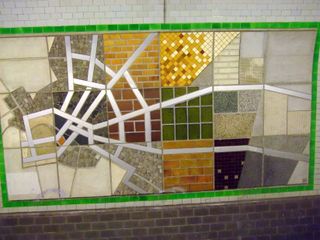 UPDATE:  Commenter Ed O points out something obvious that I missed in all this serenity:

The last map is a representation of East Berlin and the border between
the coloured and non-coloured parts of the map is the line of the
Berlin Wall. I think this probably would have been the ‘Berlin today’
map in the series when these works were created. This is a nice
reminder of the sort of propaganda foisted on East Germans at the time,
where in the City’s long history, somehow at sometime, West Berlin just
falls off the map. Here East Berlin is vividly represented, while West
Berlin is a visual blank. I guess at the time it was considered by the
government to be a foreign country and not part of the capital of the
GDR. More a political than an historical map – cool and serene perhaps
on an aesthetic level, but an intriguing snapshot of the times,
nevertheless.

Karlsruhe: A Ride on the “Tram-Trains”
Confessions of a Spatial Navigator

5 Responses to Berlin: Serene Images for a Hiatus

You are here: Home › Berlin: Serene Images for a Hiatus