The core branding idea of the Paris RER is a really powerful one.  Here’s
how it used to be presented, as a consistent citywide product
(click to enlarge; full-size map here): 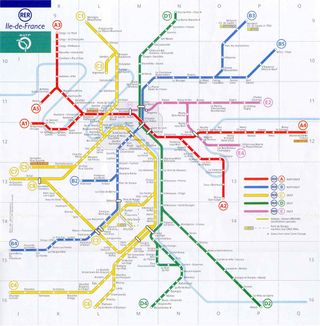 Focus on the red line, Line A.  Its a single line across the center of Paris
with branches on both ends.  The common segment in the center has a
high enough frequency that you can use it as though it were a metro
line, while the branches are less frequent but still very good service
for outer suburbs.  The branches are called A1, A2, etc, but the common
segment is just Line A.

This branding scheme is a good example of the principle that simple services should be presented in ways that make their simplicity clear.
Customers should be presented with complexity only if they need the
more complex information, such as to select the correct outer branch for
reaching an outer-suburban destination.  So on the RER, if you need to
go to, say, Euro-Disneyland in Marne-la-Vallée, you need to select the
suburban branch called A4, but if you just want to ride on the metro-like segment within the core of Paris, you just need to remember
Line A.  The system provides one level of nomenclature for
describing the simple common segment, which is all that a huge
percentage of riders will use, and a second more complex layer only for
the people who need that complexity.

Actually, there are FOUR tiers of information here in a clever hierarchy, all designed to ensure
that you don’t have to learn more information than you need to do what
you’re going to do:

The principle is that this is a progression from simple to complex.
The point of this hierarchy is not to lead customers all the way
through, but exactly the opposite: to enable them to “get off,” ignore
the remaining layers, as soon as they have the information they need.

But alas!  SNCF has demolished this system on the RER lines that they operate (C, D, and E) and replaced it with something that requires the customer to learn much more complexity.  While the letters are still there, they are receding in the information system.  RER branch numbers (C2, C3 etc) have disappeared entirely on the SNCF-controlled lines.  Instead, users are confronted with a single line number (C) and then the names of various possible endpoints.  Sometimes, as on this sign, the endpoint appears without even a line number — a throwback to how the Métro was presented before line numbers were introduced in the 1970s. 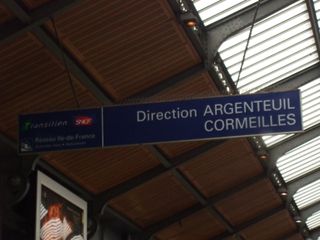 Endpoint-based nomenclature is common in many rail systems, but it carries several nasty problems when used without line numbers or names:

This is especially a problem on Line C (yellow on the map above) because one of this line’s southeastern branches, the C8, wraps around to the west to end at Versailles, which is also served by western branches on the same line.  So if passengers must rely on the names of endpoints to figure out which way they’re going on the core Paris segment, ‘Versailles’ is going to be misleading.  (Sydney readers may be reminded of the experience on Cityrail at Lower North Shore stations, where trains in both directions can have the final destination ‘Hornsby.’)  The C8 designation was more useful in helping customers see that this is one of the eastern branches — and thus denotes a train going east through the Paris core — despite its ultimate endpoint in the west.

So here’s what I’d like to posit based on the RER story, and many others.  As always, please argue with me.

Paris: Do We Have Enough Logos Yet?
Getting Beyond Paris (or Your City)

11 Responses to Paris Rapid Transit: The Four Levels of Nomenclature

You are here: Home › Paris Rapid Transit: The Four Levels of Nomenclature