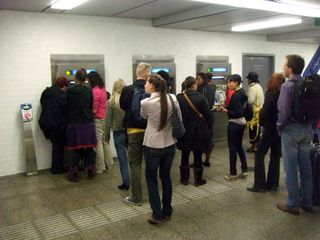 On my post on failed welcoming, commenter Pantheon suggested an excellent checklist for transit agencies who want to care about newcomers to their city:

Transit systems are bureacratic by their nature and often have byzantine rules and quirks. This is ok if you are a regular user. If you lived in this city, you might have known that the fare machines downtown are always broken, that the guy in the booth never has change. Maybe the mall nearby never has lineups and you would buy your tickets there. But to a visitor, your first interaction with a transit agency feels like the first day of class in a new school: everyone else knows where they are going and how to get there, but you are left clutching your timetable, lost and confused, alone, and trying to figure out how to find Room 342. What is the solution to this? Here are some suggestions

1. Figure out what the point(s) of access are for visitors to your city (i.e. train station, airport) and optimize customer service at those locations. If you can only focus your efforts on improving the experience in one place, start with the downtown train station.

3. Color code the bus lines on the route maps by level of frequency. … [JW:  I would say color-code all lines by frequency regardless of whether they’re bus, rail or ferry.  Many good European systems do this.]

4. Make change. Or make the fare structure or fare collection method (machines that take credit cards) such that you don’t have to.  [JW:  I would disagree with this only if drivers are collecting fares while their bus or streetcar/tram is waiting.  Historic practice in both Europe and Australasia is for drivers to make change.  It causes a lot of delay.  But of course off-board systems should make change.  Most claim to, but machines often run out of change quickly.]

5. Make the fare zones easy to understand, and make it such that most places visitors to the city would be going are all within one fare zone.

You might even want to think “outside the box” and get a bit more radical. For example, one visitor-friendly approach would be to advertise that if you can prove you just arrived in the city, you ride free for your first three days. So if a fare inspection officer comes up to you, and you can produce a train ticket that shows you are a new arrival in the city, it’s free. You could put up signs that say this right at places where people getting off the train would see them. What a relief it would be for a visitor to the city to see this sign, and realize that he has three days to learn the system and figure out how to buy tickets, and for now he can just relax and use his train ticket stub and not have to worry about it. This costs virtually nothing to a transit agency, but starts them off on the right foot with a new arrival.

I think that just about covers it!

The March of the Centipedes: Amsterdam’s Bus Rapid Transit Line
Paris: Do We Have Enough Logos Yet?

14 Responses to Welcoming Guests to Your City: A Reader’s Checklist

You are here: Home › Welcoming Guests to Your City: A Reader’s Checklist