Throughout the Thredbo conference on transit competition in Delft, Netherlands last week, the various Dutch speakers and hosts managed to keep up a continuous theme of national self-reproach. The message was something like: “We know everyone thinks we’re the closest thing to an urban transport paradise on earth, so the best service we can offer is to show you all the ways that even we can screw up.”  The conference began with a plenary presentation by Hugo Priemus of the Delft University of Technology on collusion and price-fixing in the Dutch construction industry, and wrapped up with a study tour that included the Zuidtangent Bus Rapid Transit system, giving particular emphasis to its most embarrassing feature.

The Zuidtangent (“south orbital”) is a circumferential route around the south and west sides of Amsterdam.  (As a tourist, you’re most likely to find it useful as the direct link between Schiphol airport and the beautiful coastal city of Haarlem just west of Amsterdam.)  It’s mostly a two-lane roadway on the surface, going up onto viaduct in environmentally sensitive areas or for grade crossings.  Stations serve a series of intervening towns, including some at major employment sites and at a hospital.  Density around stations is often fairly high, though in compact forms with rural open space between them. 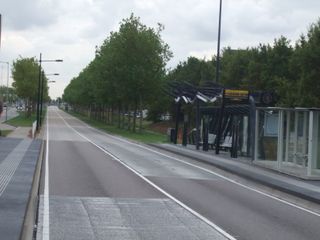 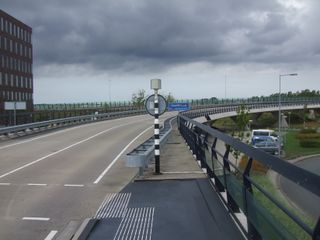 The buses are nice, though nothing amazing by Northern Europe standards. 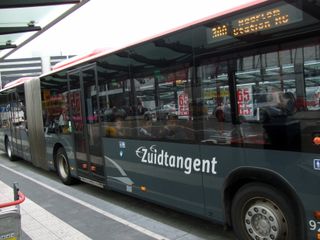 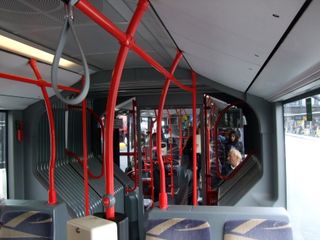 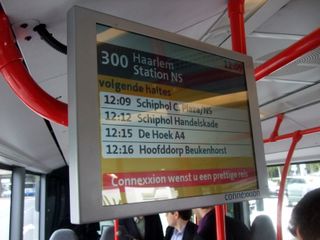 The line is mostly exclusive busway, but there are compromises at both ends where it needed to penetrate older urban fabric to get to transit hubs.  Undergrounding would have been the only alternative; that’s very expensive in waterlogged Holland, especially in the narrow streets of medieval and Renaissance Haarlem.

The embarrassing feature?  Expensive and architecturally distinctive wave-form roofs on each shelter, many of which blew off in the first serious winter storm. The roofs had to be removed for safety, but they left the wavy metallic bars that had supported them. These bars flail above each shelter like an upended centipede, while a much plainer and functional roof has been installed beneath them. 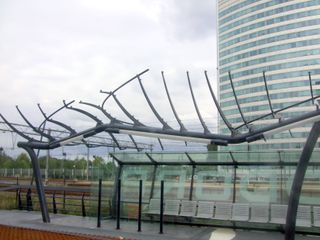 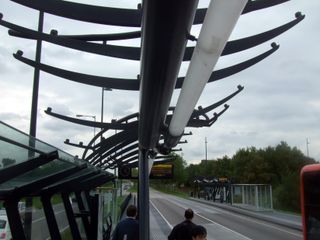 I like them.   I suspect that the flailing arms are fused with the station structure and were just too expensive to remove once they had lost their purpose.  But it’s also as though a plain old screw-up was viewed as deserving a monument, which these huge and distinctive creatures certainly are.  As a gesture, it seems very Calvinist, but aware of itself as postmodern gestures have to be. 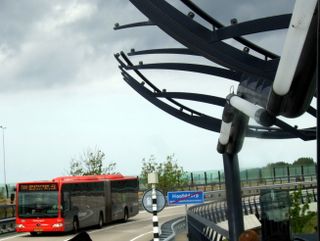 Failed Welcoming
Welcoming Guests to Your City: A Reader’s Checklist

One Response to The March of the Centipedes: Amsterdam’s Bus Rapid Transit Line

You are here: Home › The March of the Centipedes: Amsterdam’s Bus Rapid Transit Line