There’s been lively comment on the last several posts about Bus Rapid Transit (BRT), including its recent history in America and elsewhere, the usefulness of the term, and the suspicions that it raises.

Still, “Bus Rapid Transit” is not going away.  So as you consider new BRT proposals that arise in your community, possibly as alternatives to a rail project that you’d prefer, here’s a wise bit of advice I was once given about conversing with people who have differing viewpoints and incomplete information:

Questions, if unanswerable, will make the argument for you.  If answered, they lead to more questions, and the question-and-answer process will help people form clear views better than an angry clash of judgments will do.  Of course, your question may turn out to have a good answer, which may affect your own views.  That’s how you know you’re having a real conversation.

Here are some crucial questions that must be asked about any BRT proposal or alternative:

1.  Are we talking about exclusive right of way?

If not, you’re at the very low end of what can be called Bus Rapid Transit, the territory of the Los Angeles Metro Rapid, which even at its best is subject to considerable delay due to congestion.  If in this territory, your further questions should be about what if anything will be done to expedite the service.  This kind of service should be attractive to you only if no better alternative is viable that could cover the same number and length of routes.  But it’s rarely a reasonable alternative to exclusive right-of-way service such as standard light rail or exclusive BRT, unless demand is simply too low for the latter. 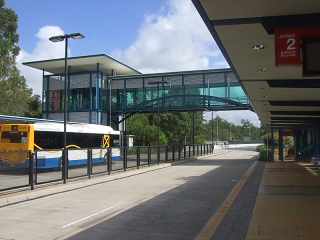 “Separated” or “grade separated” means that it has no intersections with cross-traffic.  Usually this is possible because it’s (a) elevated on structure, (b) operating in a corridor that’s already grade separated, often alongside a freeway or railway, or (c) underground.  Brisbane, which has the developed world’s best example of a separated busway system, has bits of all three.

If it’s fully separated, with passing lanes, it has the potential to deliver the same speed and reliability as rail rapid transit.  It may have lower capacity, but capacity is a complicated issue with several dimensions, and in practice the only capacity question that matters is “Will I be able to get on?”  A competent operations plan will be able to answer that.

If it’s not separated, the next question is:

“Will it pre-empt intersecting signals to the same extent a light rail project would do, and if not, why not?”

This is a very murky area in my experience.  Sometimes this comes down to the fact that, depending on your jurisdiction, rail invokes a different regulatory authority that imposes different standards.  Rail crossing standards are often derived from the history of heavy rail, freight and passenger, which physically cannot stop on short notice and therefore isn’t expected to.  A more coherent argument for signal priority should rely on the need to provide rapid transit, not the abilities of the vehicle or the regulatory authorities that the vehicle technology happens to invoke.  Obviously, real world conversations have to deal with the regulatory regime in place, but it’s important to ask enough questions to understand whether the signal priority regime really matches the intent and branding of the service, regardless of the regulatory situation.

If the answer boils down to impacts on intersecting traffic, insist on an analysis of the options in terms of person-minutes of delay.  Once a surface BRT line is carrying heavy loads, as the Los Angeles Orange Line is, delays to it may be causing more person-minutes of delay than corresponding delays to cross traffic would do.  If the person-minutes calculation is anywhere close to even, you can then look at the stated goals of your local government regarding encouraging public transit use as opposed to car use, and cite them if relevant.

3.  Are there exceptions to the stated degree of exclusivity and separation?  If so, where, and why?

A line is only as reliable as its least reliable point, so if there are localized compromises to the exclusivity or separation of the service, these deserve your intense scrutiny.  On a separated busway aiming to emulate heavy rail’s speed and reliability, a single signalized intersection can be a huge limitation.  Brisbane’s otherwise magnificent South East busway has one pair of signals at a crucial point right on the edge of downtown, and these cap the capacity of the entire facility.  (Unfortunately, avoiding these signals would have required infrastructure of then-unimaginable size — a very complex tunnel under the river — and this would have killed the whole project.)  In Ottawa, the gap in the busway downtown has made it impossible to see the network as a complete rapid transit system.

If you’re at-grade but exclusive, in a situation emulating surface light rail, your project may have a few places where exclusivity was too difficult, so the bus mixes with traffic for a few blocks.  There is one situation where this is completely acceptable, and I’ve proposed it myself:  If a short segment of roadway is too narrow to take a lane from and wildly expensive to widen, you may be able to get the exclusive-lane effect by metering access to that segment with signals.  Short bridges are the obvious example.  Instead of insisting on a bus lane on the bridge itself, provide signals at each end that stop traffic approaching the bridge to let any bus get past it and over the bridge quickly.

There are also times when a BRT can share a segment with very low volumes of car traffic.  This sometimes happens at the ends of busways when you’re trying to bring them to an existing terminus such as a shopping center or business district — an arrangement I’ve seen in situations as different as Haarlem, Netherlands and the San Fernando Valley of Los Angeles.  Here the key is to operate on streets that are never congested under normal operations, to have signal priority if possible, and to keep the mix to a minimum.  Check the traffic situation on whatever day peak traffic conditions can be expected, e.g. a Saturday in early December for an American shopping cente
r.

But this leaves some cases that really are problematic, where BRT mixes with traffic because, well, it would just have too much of a negative impact on other traffic if we took an exclusive lane through that spot.  Obviously here, you need to insist on a quantification of the effect on the BRT with or without that exclusive segment, and the ridership consequences of the greater speed and reliability.  If that’s done, an argument can be made one way or the other in terms of person-minutes of delay, including all the downstream impacts due to the loss of reliability at this point.  If transit loses that argument, you then have to assess whether the project is still better than nothing, or better than a competing rail project.

Finally, even worse, the tradeoff may be between an exclusive lane for BRT and on-street parking, especially in a business district.  Here it’s almost impossible to do a quantitative comparison, because the values on the two sides are so different.  I’ve never seen a strip of small businesses willingly surrender their on-street parking on the basis of any quantitative analysis of anything.  (If you have, please send me a link.)  The instinctive conservatism of small business is completely understandable when you consider their exposure to risk, but these debates are among the most intractable I’ve ever encountered, and they usually end up as purely political judgments.

Note, by the way, that this whole section applies to specific light rail projects too.  For example, San Francisco’s Third Street light rail is mostly exclusive except for a couple of places where it was too hard, and at one of these (the northbound Fourth Street approach to the right onto King Street) the service can get stuck in significant queues behind a signal.

A open BRT is one where some buses branch off of the BRT corridor into various on-street routes, potentially expanding the range of places that can be reached without a connection and also generating a higher frequency on the common BRT segment than pure demand would otherwise justify.  Service in an open BRT can be a (sometimes confusing) mass of overlapping lines, while closed BRT is just a single line or at most a few entirely within the BRT infrastructure.

Examples of open BRT include Brisbane, Adelaide, Auckland North Shore, Ottawa,
Pittsburgh, and in Los Angeles the Harbor and El Monte Transitways.
Here in Sydney the North West T-Way is an open BRT.

Examples of closed BRT include the Eugene EmX, the Los Angeles Orange Line, and the Boston Silver Line(s).  Here in Sydney, the Liverpool-Parramatta T-Way is currently run as a closed BRT, though there are plans to open it.

The open-closed distinction can be fixed by infrastructure, such as by choosing buses that cannot operate on regular streets or (as in Curitiba) using all high-floor buses with high platforms.  But it can also be operational.  For example, some have proposed operating the Los Angeles Orange Line as open instead of closed.  This would be a major service change but not much of a change of infrastructure.

Closed BRT has its place.  Curitiba is one of its great successes, although that success (in both service and redevelopment) has led to crush loads that are now driving a conversion to rail.  At the opposite end of the demand spectrum, Eugene, Oregon opted for closed BRT with specialized buses and seems happy with that choice.

But open BRT is most likely to be the project that delivers something a rail project cannot do: direct service to many branches without having to build rail on all the branch lines.  This has been a perfect fit for Brisbane, because that city has a very strong CBD but few other major centers, so the need is for service that can follow the busway some distance from the CBD but then branch out to cover several suburban corridors.  This is the one service pattern for which there is no rail option.

This may still turn out to be a phase on a longer path to light rail, as it turns out to have been in Ottawa.  Brisbane’s busways are designed to be convertible to light rail but there’s currently not much interest in doing so.  However, if the busways succeed in galvanizing the creation of some high-density centers further out, the corridors leading to these centers will become the strongest branch of the busway service.  When one branch starts generating capacity needs that exceed what buses can handle, that would be one signal that it’s time to look at rail.

You bet, but this post is already too long.  Here, to sum up, are a few others that clearly matter.  I’m sure comments will suggest more.

And finally, to pick up on a really important theme of recent posts and comments:

72 Responses to Bus Rapid Transit: Some Questions to Ask

You are here: Home › Bus Rapid Transit: Some Questions to Ask