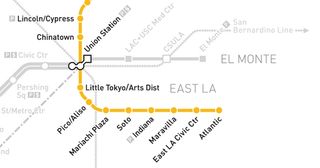 My attempt at a feel-good post on the opening of the East Los Angeles Gold Line light rail extension attracted a lot of comment from locals who don’t feel so good about it.

There are three big objections:

Meanwhile, for travel from East LA to downtown and points west, the
Metro Rapid bus line 720 on Whittier Blvd (parallelling the Gold Line about 0.7 mi / 1.1 km to the south) is much more direct, flowing right
through downtown and all the way out Wilshire Blvd. to Santa Monica.  What’s more,  the Metro Rapid is faster than light rail for a similar trip:  By my rough calculation, the 720 averages 17 mph (27 km/h) inbound from Commerce Center (Gerhard & Whittier) to downtown (6th & Main).  It
will be interesting to see if the Gold Line draws at all from south of
the line where the 720 is also in walking distance to most
customers.  Some people will walk well over 0.5 mi to get to a fast service that flows through to their destination, and for much of this area that fast service may continue to be the Metro Rapid, not the Gold Line, at least until the Regional Connector is completed.

The other common theme in the comments was Measure A, which prohibited underground rail construction in Los Angeles County.  The measure was a reaction to significant problems that plagued the construction of the Red Line subway.  Ironically, some of its proponents at the time also backed its repeal, as they have become supporters of the Westside rapid transit project that would extend the Red Line all the way out Wilshire Blvd. to Westwood and Santa Monica.

In the end, I completely understand the frustrations surrounding this project, and agree that it probably will not really begin to show results until it flows through downtown as part of the Regional Connector plan.  It may be that the political pressure to put some kind of rail transit into East Los Angeles led to a project that will turn out to be premature and inadequate.  I wouldn’t be surprised to see a rapid transit subway extension proposed into this same area, perhaps under Chavez, in the next few decades.

Still, understanding how difficult rail transit development is in Los Angeles, I do think MTA and their partners in city and county government deserve a few days of good feeling for having gotten something done.  So I’ll end on that note for now.

33 Responses to Los Angeles: Reader Feedback on the Gold Line

You are here: Home › Los Angeles: Reader Feedback on the Gold Line