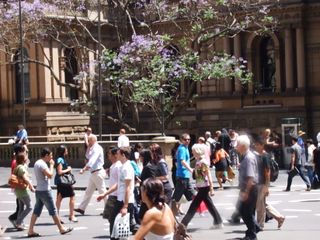 Peter Parker at Melbourne on Transit has an interesting analysis of “scramble crossings” at signals.  Scramble crossings are phases of a signal that give pedestrians the green in all directions, so that they can cross in any direction including diagonally across the intersection.  Sydney, where I live, has exactly one of them, to my knowledge.  It’s right in front of Town Hall.

Peter proposes that when a pedestrian wants to cross to the diagonally opposite corner of an intersection, the usual method of doing so — cross one street, wait for next signal, cross the other street — is a little like having to make a connection as part of a transit trip.  The scramble signal provides a direct trip, but at a lower frequency than you’d have if you just had the two standard crossing phases.  Frequency of a transit trip is analogous to the cycle time of the signal.

It’s an interesting analogy.  I have to say that while scramble crossings are nice when you get one,
it’s far better to just increase the frequency overall, by speeding up the cycle pattern of the signals. My informal experience is that Australian signal cycles are longer than North American and European ones, which may be one of the reasons that so few people obey them.  Long-cycle signals have the particular disadvantage of encouraging red-light running, impulsive crossing, and other dangerous behaviors, because the consequence of just missing a phase is relatively high.

Integrating Transit and Land Use: A Cautionary Tale
Urban vs Local?

19 Responses to On Scramble Crossings

You are here: Home › On Scramble Crossings