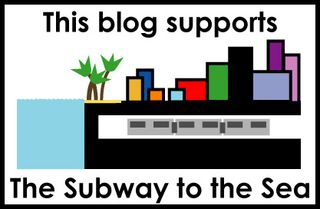 This friendly little graphic, which I found on Dan Wentzel’s Pink Line blog, promotes the “Subway to the Sea,” an extension of the Los Angeles Purple Line subway, largely under Wilshire Blvd., all the way to the beach at Santa Monica (map here).  I like it as a logo, but it also serves to explain why relatively few subways in coastal cities go all the way to the beach, and why they often stay back from the ocean a bit.

(It’s not the “seawall” problem.  The graphic suggests that the subway station and the ocean would be separated by a vertical seawall, an especially expensive and risky construction project.  This would not be the case in Santa Monica, which has a gently sloping beach, though there might be some related engineering issues.)

No, the real problem is the radius of demand.  The ridership potential of any station or stop depends mostly on what’s within walking distance of it.  How many residents are there?  How many jobs?  How much retail and other activity?  How many people will that attract on a daily basis?

This “area served” by a station is usually visualized as a circle of a fixed radius.  You can argue about how big the radius is, but for a subway station it’s at least 0.5 mi / 800m and arguably over 1.0 m / 1600m.  In reality, it’s a fuzzy circle where demand grows weaker as you get further from the station.

But it’s a fixed radius, which means a fixed area.  So the amount of development in that fixed area — in other words, density — is the largest determinant of the size of the market.  (Connections, of course, also play a role, along with park-and-ride, bike-and-ride etc.  But the walk radius is still fundamental.)

If your station is right at the beach, this circle obviously sticks out into the ocean.  And since there’s no development there, the rest of the circle — the few blocks around the station right at the beach — needs to be even denser than it would otherwise need to be.

The Los Angeles “Subway to the Sea” is envisioned ending at Santa Monica’s 4th Street, about 1/4 mile back from the beach, but the radius of demand is larger than that, so this will still be an issue.

This is a particular issue when we’re talking about ending the line at the beach — as opposed to just running along the beach as, say, New York’s Rockaway branches do.  That’s because the end of the line needs to be an especially high ridership generator, or what transit planners call an anchor.

As you get near the end of a transit line, the vehicle tends to empty out because it’s going fewer places and therefore attracts fewer boardings.  This can lead to permanent wasted capacity near the end of the line, what we call a weak anchor.  A strong anchor is a big destination right at the end of the line that compensates for this problem by giving lots of people a reason to use the line all the way to its endpoint.

The anchoring principle is why I suspect that the Wilshire subway may well end at or near Westwood/UCLA, 4-5 miles back from the beach, at least in its initial segment.  Westwood/UCLA is a massively strong anchor, defined by highrise employment, highrise housing, and a huge university.  Nothing in Santa Monica is (or wants to be) anywhere near that dense.  The “Subway to the Sea” graphic does suggest a Santa Monica beachfront with far more tall buildings than are there today, but I have trouble imagining the massing of buildings against the ocean that you’d need to generate a strong anchor for something as expensive and high-capacity as the terminus of a rapid transit subway.

This is a good reason to design subways so that they have room to turn as they approach the ocean, so that they are potentially extendable parallel to the beach.  In the case of Santa Monica, I could certainly imagine designing a line ending far enough back from the beach that it could turn southward someday, extending south through Venice perhaps along Lincoln Blvd.  Such a line would match the design of New York Subway’s Rockaway and Coney Island services, which both turn and run along the beach — usually 1/4 mile or so back from it.  The Far Rockaway branch actually swings further from the beach at its endpoint in Far Rockaway, thus ending in a location where the entire circle around the station is developed, yielding a stronger anchor.

(Nothing in this post is meant to express a fixed opinion about the ultimate shape of the Los Angeles Purple Line.)

29 Responses to On Subways to the Sea

You are here: Home › On Subways to the Sea