At the Urbanophile today, a fantasy transit map of Columbus, Ohio by Michael Tyznik.  This fuzzy image will show you the general shape:  For the very detailed map, click here. 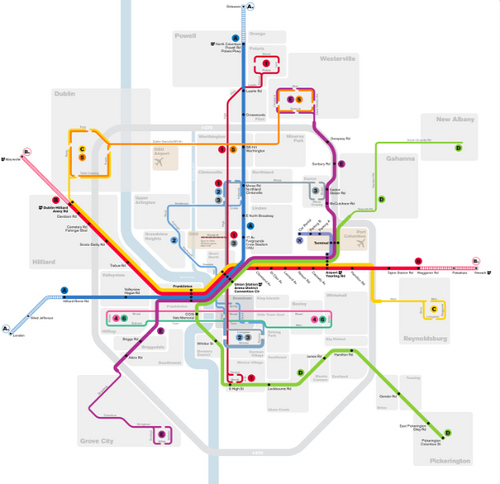 It imagines a network of rapid transit subways many of which flow into surface rail lines, so presumably a model similar to San Francisco or Brussels or the Boston Green Line.

(He calls it a “tram-train” system, but it’s actually the opposite of the pattern used by the celebrated tram-trains in Karlsruhe, because here “train” means a subway flowing through the center of the city, while in Karlsruhe the tram portion is the city and surface train lines are used to reach outer suburbs.)

Some problems to note even in a proposed utopia:  Subways that flow into streetcar lines are often a poor fit, for three reasons:

All these issues will be familiar to transit riders in San Francisco and Brussels.

Note also that ending routes in one-way loops, as this fantasist does, is not the best practice unless the loops are very small (e.g. one block wide).  That’s because you need a driver break and recovery point at the end of the line, and you want the vehicle to be empty at that point.  If you’re ending in a large loop (planners sometimes call them “balloon loops”) you have the same problem as the London Circle Line: there’s never a point where everyone is off so the driver can have a rest and the vehicle can get back on schedule if it’s a bit late.  Even driverless systems need some spare time at end of line to recover from delays.