Very interesting and civil comment threads have grown on the last several posts.  Comment threads, of course, have a tendency to start with the post’s topic but then turn into conversations among the commenters, often leading far from the source.  As long as everyone’s civil, I don’t worry about that much.  I’ve learned not to treat the comment count as a measure of my relevance.

But I do want to note the efforts of commenter Watson, who lucidly argued for parking subsidies, sprawl land use patterns, etc. on the this recent post.  The resulting comment thread is worth a read.  On the subject of whether downtown Portland all-day parking rates should be higher, he began:

Be careful what you wish for. In the short-term, a sharp increase in central city parking prices might induce a significant shift from autos to transit. But over the long-term, the primary effect may be to drive businesses and people out of the city and into the suburbs where land is cheaper and parking can be provided at lower cost.

He’s right; this is exactly why there’s so much political pressure to keep parking costs low downtown, and it’s a good reason why parking price increases should never be “sharp” in the sense of sudden large jumps.  What’s important, as commenter Alon Levy noted in response, is that if a downtown has a certain critical mass, as Midtown Manhattan clearly does, the actual risk of business flight diminishes, though of course businesses will still threaten it.  Nobody can seriously argue that Bloomingdale’s will pack up and move to New Jersey because parking is cheaper there.  So downtown parking is, like many things, a measure of the relative optimism or pessimism of the downtown business culture.  If you think downtown Portland is a really special place where people really want to be, you won’t worry about higher parking cost — especially the all day costs, paid by commuters, that were the subject of my post.

The thread veers toward more general topics, but includes interesting debates about the impact of zoning on land prices and urban outcomes.  Finally, though, Watson says this:

In Europe, driving is far more expensive than in the U.S. Gasoline prices are two to four times the price in the U.S. Taxes and fees are also higher. Road congestion is worse. And yet cars overwhelmingly dominate the transportation system in Europe too, just not quite as much as they do in the U.S. Europe has been suburbanizing like crazy over the past 50 years, just like the U.S. For economic, historical and geographical reasons, Europe will probably never become as sprawly as the U.S., but it has clearly been following the same basic trajectory.

And here my fundamental reaction is, OK, Watson has his idea of Europe, and I have mine, and that’s because he has his idea of the good and I have mine.  Europe is full of development patterns that you can call sprawl if that’s your focus.  Here, almost at random, is Stadtwald (“city forest”) near Essen, Germany: 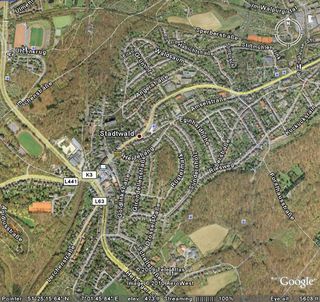 Watson would point out how car dependent this is. But I’m more likely to notice that the streets, while curvy, are all connected; there are no cul-de-sacs; there’s a lot of preserved open space; and a kid can probably safely ride a bike to a grocery store.  Meanwhile, I’d be more likely to pull up an image like this, near Valencia, Spain, to show how firmly European cities can maintain hard edges when there’s a good reason to, such as the long-term value of farmland. 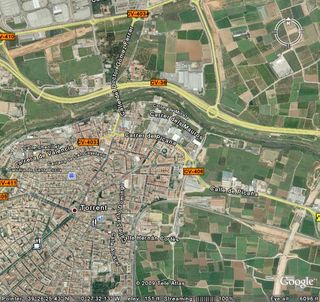 I’m sure Watson and I would have fun arguing over Google Earth, and we can certainly both cite statistics.  But we won’t convince each other, because ultimately, I suspect, we are just arguing from different notions of the good, perhaps even different notions of home, and like everyone we both want to believe that our notion is widely shared.

That doesn’t mean these arguments are futile.  But it does remind me that ultimately people are only convinced by being in a particular kind of place and liking it, and that response is going to express subconscious, unexaminable things about our own conditioning.  If you like the sprawling outer edges of American cities, then relatively sprawly areas around some European cities will feel like home to you, just as European pedestrian cores feel like home to me.  And you can’t argue with that.  NIMBYism is an intractable problem for the same reason: NIMBYism is people protecting their sense of home.  Since the creation and defense of home is a lower-brain function that we share with most animals, it’s about as receptive to rational argument as sexual feelings are.  And I say that not just about Watson’s sense of home, but also about mine.

So anyway, thanks to Watson, and also to commenters like Alon Levy and Engineer Scotty for engaging with him.  I would never devote so much time to commenting on fundamentally pro-sprawl and pro-car blogs, because the resulting ideological hostility would be too frustrating given my temperament.  But some people thrive on the excitement of forays into opposing camps, and if they’re as civil and thoughtful as Watson has been, they’re welcome here.

82 Responses to A Visit From the Loyal Opposition

You are here: Home › A Visit From the Loyal Opposition