If you’ve seen much of Vancouver on television the last few days, you’ve probably seen a shot of a small train gliding along an elevated guideway.  It’s SkyTrain, the world’s largest system of fully automated (driverless) metros.  Perhaps you’ve ridden driverless trains that shuttle between airport terminals.  SkyTrain is the same principle, at a citywide scale.

Driverless trains raise all kinds of anxieties. Many people like knowing there’s someone in charge on the vehicle, and imagine that this person will be useful in emergencies.  But on most subways, you can only talk to this person by pushing an intercom button.  There’s very little he can do if there’s an emergency in your car other than call for help. 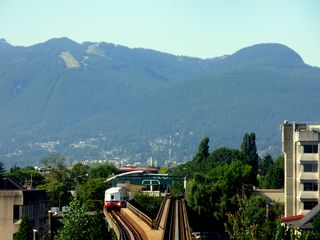 SkyTrain provides exactly the same emergency intercom button, but the person you’re talking to is in a central control center instead of on the train.  As a result, they are likely to have a better view of the whole emergency, and the resources at hand, than a train driver could have.  There are still staff roaming the system, checking fares and providing assistance, but not one on every train.

Of course, if zoom and whoosh matter to you, there’s nothing like the experience of riding in the single seat at the front of the train, enjoying a view that’s usually reserved for a train driver.  And it’s quite a view.

None of these, however, are the real reason to consider driverless metros.  The real reason is that they break the connection between frequency and labor costs.  Look at SkyTrain’s frequency tables: 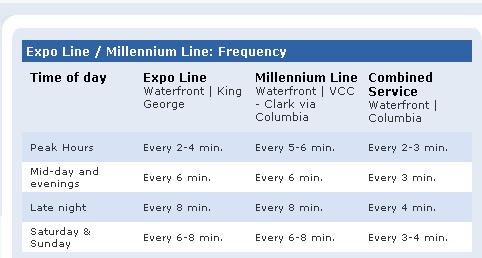 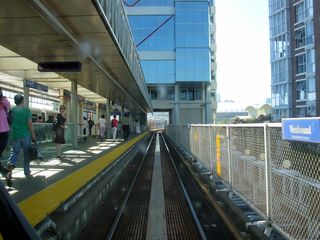 Some non-automated subways do run as frequently as SkyTrain, but they’re in places like Manhattan, London, and Paris, cities vastly larger than greater Vancouver.  (Paris, by the way, now has a driverless line, and is beginning to convert existing lines to driverless.)  No non-automated system could have delivered such high frequencies late into the night in a city of Vancouver’s scale.

The lack of a driver is the key to those extreme frequencies.  When you have a driver on every vehicle, the labor cost is the dominant cost of operations.  So when you have to cut service, as many North American agencies are doing this year, you end up cutting frequencies, starting with late night and weekend.  Many North American light rail systems are dropping below even a 15-minute frequency in the evening, making themselves increasingly useless for the spontaneous trips that are essential to freedom in urban life.

As I’ve followed the debates between driverless metro and light rail, most recently in Honolulu, I’ve been struck by how rarely frequency is mentioned.  Reading the coverage of Honolulu’s debate between elevated driverless metro and light rail, you’d think that the primary question is profile — elevated vs surface — and that this is a question of running fast on an ugly elevated structure or running slowly but more accessibly on street.  Few on either side make the crucial point that a driverless system will be able to run frequently even very late at night, early in the morning, whenever you want to travel.  Light rail, bound by labor costs, will always be pressured to cut frequency outside the peak period.

Light rail is wonderfully flexible, able to run onstreet with signalized intersections, and across pedestrian zones, as well as in conventional elevated or underground  profiles.  Driverless metro must be totally grade-separated, which in practice usually means elevated or underground.  SkyTrain got its name because the original lines were mostly elevated, though the newest, the Canada Line, has a long underground segment. (I’ll do another post on the local community impacts of the SkyTrain elevated structure, and the serious problems (and opportunites) they create.  I’ll do yet another on Vancouver’s current SkyTrain vs light rail debate, in its Broadway corridor.)

As you’d expect, SkyTrain has higher average speeds and reliability than surface light rail.  As always in urban transit, speed and reliability are mostly not features of the technology; they are mainly about how much you stop and what can get in your way.  Not much can get in the way of a fully grade-separated system like SkyTrain.

But I am struck that in these debates there’s so little talk of off-peak frequency.  As an urbanist, I want to see vibrant cities that are full of activity for 18 if not 24 hours a day.  That means I want nightlife.  Isn’t that a good reason to be interested in a service that really can run every 4 minutes at midnight? 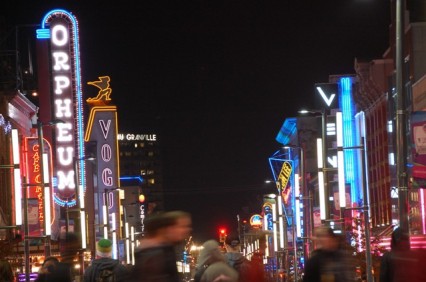 How Do I Become a Transit Planner?
Sydney: Driverless Metro Postponed?

84 Responses to Frequency and Freedom on Driverless Rapid Transit

You are here: Home › Frequency and Freedom on Driverless Rapid Transit