I told you I thought Vancouver would be lucky.  From Vancouver reader Meredith Botta:

We have had spectacular weather over the past few days, cold enough at night to preserve the snow (and to make new snow) at the outdoor Olympic venues, and warm, sunny and clear in the day.

Trust me, you have to have lived through a Vancouver winter to understand how miraculous this is.   Gordon Price even caught some cherries blooming, a good month ahead of schedule.  Meredith goes on: 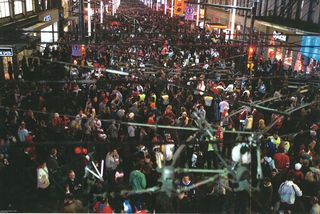 The feeling downtown amongst the crowds is unbelievable …. lots of smiles punctuating the rainbow of nationalities everywhere.  I even bumped into a quartet of singing Russian women in a crowded Canada Line train the other day.  TransLink announced today that they hit a new record with 1.7 million trips made in one day, yesterday.  Ridership is about evenly split between rail and buses, with SkyTrain exceeding 600,000 / day for the first time in its history.  I hope the politicians are paying attention.

For a taste of Olympic thrills and frustrations from a transit operator’s point of view, see TransLink’s in-house blog The Buzzer.  For the view of a Vancouver urbanist who’s not afraid to call failure when he sees it, watch Gordon Price.  Both, not surprisingly, are doing frequent and lively posts during the games.

Much of the spectacle in the city, such as the pic above, is the result of strategic street “openings”, which are exactly what motorists would call “closures.”  Streets have been closed to cars so that they can be open to masses of people.

Vancouver has long been willing to do this for special occasions.  For a few days in July each year, for example, the entire West End district is closed to motor vehicles during the annual fireworks, so that 100,000 or so people can flow through them on foot.  (I did a short meditation on this phenomenon here.)

One thing these event-related “openings” do is arouse interest in making them permanent.  Unfortunately, the one permanent “opening” that seems to be most discussed is the one that affects transit rather than cars.  Gordon Price raised the question of permanently “opening” Granville Mall to pedestrians, displacing the electric trolleybuses that are intended to operate there but are currently on detour.  The thread on that post, including a reality-check from yours truly, is worth a look.

Sydney: Driverless Metro Postponed?
The Power and Pleasure of Grids

2 Responses to Vancouver: The Olympics on Transit, Week 1 in Review

You are here: Home › Vancouver: The Olympics on Transit, Week 1 in Review