This guest post is by EngineerScotty, a software engineer and part-time transportation geek from the Portland, Oregon area.  He is a frequent commenter here on Human Transit. I’m a father of several small children, including twin boys (now four years old).  [Not those in the picture — JW]   Using public transit provides parents with several challenges not faced by childless passengers; and conversely, families with children provide transit authorities with challenges–and opportunities–that are unique.  In a recent thread on PortlandTransport.com, one poster, a dedicated urbanist with a bit of a temper, made it clear to myself and other parents that he considered kids–our “screaming brats” as he put it–unwelcome on transit.

The exchange got me thinking about the particular issues facing parents who use transit–whether by choice or due to economic necessity.  This blog has covered a few family-related subjects, such as the issues faced in New York when schoolchildren take public transit rather than dedicated school buses and the situation is not managed well, but families and children haven’t been dealt with in a systematic fashion here.  In many cities, especially those without a strong transit culture (and the land-use patterns needed to make that a reality), having a larger family can be an obstacle to transit use–and in many places, it’s assumed that having children invariably means a move to the suburbs.  This is unfortunate, for several reasons, so this article examines several ways that a transit agency can help attract and keep families as customers–and why it is worth the effort.

In this post, I’ll frequently refer to TriMet, our local transit agency–your own agency’s policies may differ.  TriMet is actually a reasonably-friendly transit system in several important ways–but as always, there is room for improvement

Riding the bus or train with children

Taking children along onto transit vehicles can prevent several difficulties, aside from the obvious hassle of herding the kids around in a crowded place.  (Packing small kids in and out of a minivan also has its difficulties, believe me).  The most obvious hassle is that depending on the transit system, traveling with children may require an extra fare be paid (or an extra pass be acquired).  TriMet permits children under 7 to ride free with a paying adult passenger, and children under 18 (along with certain qualifying students 18 and older) travel at a reduced price (and may travel alone).  TriMet has a few other family-friendly fare policies, which I will get into in a moment. 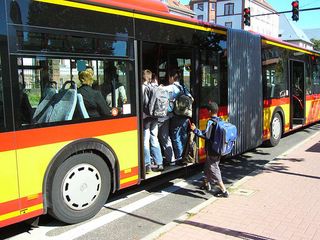 Beyond the potential added expense, there are numerous other practical difficulties involved with taking children on the bus or on the train.  Older vehicles, especially the high-floor variety, often have difficulty accommodating strollers and such; even when they are accommodated, loading and unloading of strollers may require use of thewheelchair lift.  Double-wide strollers, for those of us with twins, are especially difficult to take on board.  And even if strollers aren’t involved, safe travel with small kids generally requires that the kids sit; whereas grownups traveling alone can cram into a crush-loaded train, that isn’t a sane option if you’ve got a preschooler with you.  Which often means waiting for the next train…

…which brings us to the topic of service frequency.  Waiting for the bus is unpleasant.  Waiting for the bus with a tired toddler is far more so.  While low service frequency is a barrier for anybody, its especially true for parents traveling with kids, for whom reading a book or playing with your iPhone isn’t an option. When you’re dealing with small children, low service frequency has one other drawback–small children have a tendency to throw tantrums, dirty their diapers, need to go to the restroom (now!)–and when this occurs, the proper course of action for the parent is to get off the bus or train, take care of the problem, and catch the next one.  With frequent vehicles and stations with basic amenities, not a big deal.  If the next bus is a half-hour later, and the only restroom is in a 7-11 near a bus stop in a bad neighborhood, it’s a big deal and often a deal-breaker.

In some cities, the transit friendly neighborhoods (the nice ones, anyway) tend to cater to a demographic that tends to be childless.  Portland’s Pearl District is an excellent example: it is well-served by transit, has lots of fine dining, shopping, art galleries, clubs, and other trappings of the “yuppie” lifestyle.  It also has zero public schools, is full of tiny apartments, and has few businesses and other amenities which cater to children.  (Portland Public Schools will reportedly open a school there in 2011).  Some residents LIKE it that way, of course–but it’s not a convenient place to raise kids.  Suburbia, on the other hand, is VERY attractive to parents, with low-traffic cul-de-sacs, larger houses (often with yards), etc… but the things that make the suburbs attractive to families are devastating to good transit outcomes.  Unfortunately, even in a relatively progressive city such as Portland, much new housing is suburban sprawl, not urban infill.  It seems to be a pattern in many US cities, residential units large enough to be attractive to families typically are freestanding homes, not apartments, and are located in the suburbs.  Larger dwelling units in the inner city are
often scarce and expensive.  And once you move to the suburbs, that minivan practically becomes essential.

One other relevant fact about having kids–you have a built-in carpool.  In some ways, hauling the kids around in a car is arguably “less bad” for the environment than the driver-only trips that dominate commutes.  On the other hand, in many cases, such trips involve either a) grownups transporting children to destinations (the kids are too young to travel by themselves) or b) grownups bringing children along on errands, in lieu of arranging for childcare–so the additional trips may not be useful in the sense that everyone in the car is being productively moved around.

The importance of families

Some may dismiss families with children as an unlikely (or undesirable) transit demographic, and propose that transit agencies instead focus on those demographics more likely to be transit-compatible, such as childless families and commuters.  However, there are several problems with doing so.

What can agencies do?

How can transit agencies (and other governmental agencies) improve things for families (beyond the obvious thing of more frequent and more comprehensive service)? Family-friendly fare structures.  Permit small children to ride


What can parents do?

Of course, parents need to be responsible passengers as well.  If your child is ill, keep him or her home (unless the trip is medically necessary).  If the child starts to misbehave on the bus or train, take him off until he calms down (often times, being removed from a bus for bad behavior–or even the threat of doing so–will be sufficient to correct the problem).  Don’t permit children to disturb other passengers.  Basic courtesy goes a long way.  That said, trips on transit can be a positive experience for kids, especially when there’s zoom and whoosh involved.

Families are an important demographic for transit, and one which is often ignored–or written off as too auto-dependent to bother with.  But they can be valuable customers to have, for many reasons.  Many of the policies which benefit families will also benefit commuters and other riders not traveling with children, improving the value of transit for all.

67 Responses to Guest Post: Families and Children on Transit

You are here: Home › Guest Post: Families and Children on Transit