Whenever I talk about the value of grid networks, as I did here, someone always says: But my city isn’t a grid.  For example, Sydney, where I live now, is about as ungridlike a city as you’ll encounter.  In fact, there’s no large system of order in Sydney’s road network at all.  Some roads follow what were once Aboriginal tracks, but mostly it just grew, one bit at a time, an accretion of millions of short-term decisions. 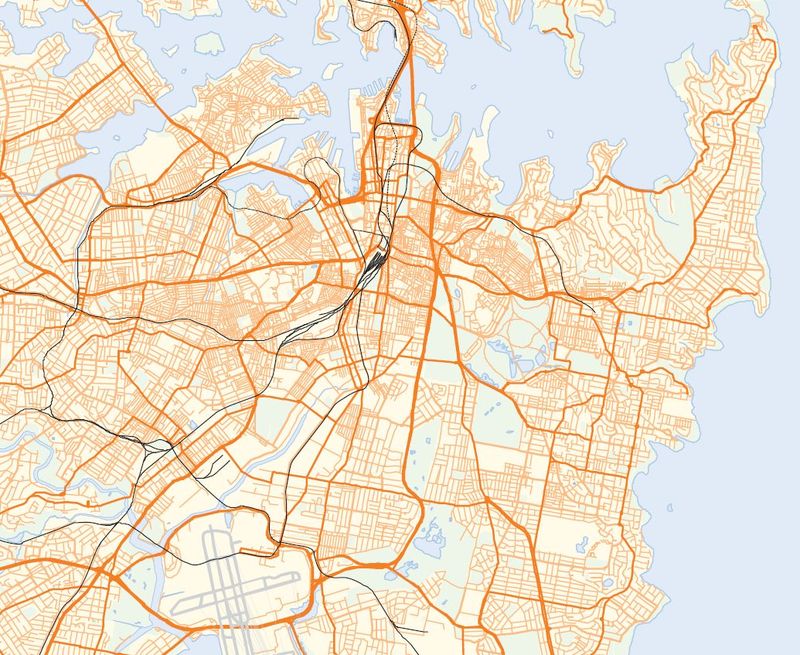 One of Sydney’s biggest problems is that the road network is so focused on the CBD (the Central Business District located top-centre in this image) that traffic is forced into the CBD that doesn’t want to be there.  But the problem is much, much worse if you’re a transit passenger.  As part of the Sydney Morning Herald‘s Independent Public Inquiry, discussed here, I did a quick review of the inner-city bus network looking for the pattern of frequent service — service that runs every 15 minutes or better all day.  The frequent network is the portion of the network where you don’t have to worry about a timetable, and where transit can therefore be used with some sense of spontaneity and freedom.  To my knowledge, nobody had drawn a map of inner Sydney’s frequent network before.  It turned out to look like this: 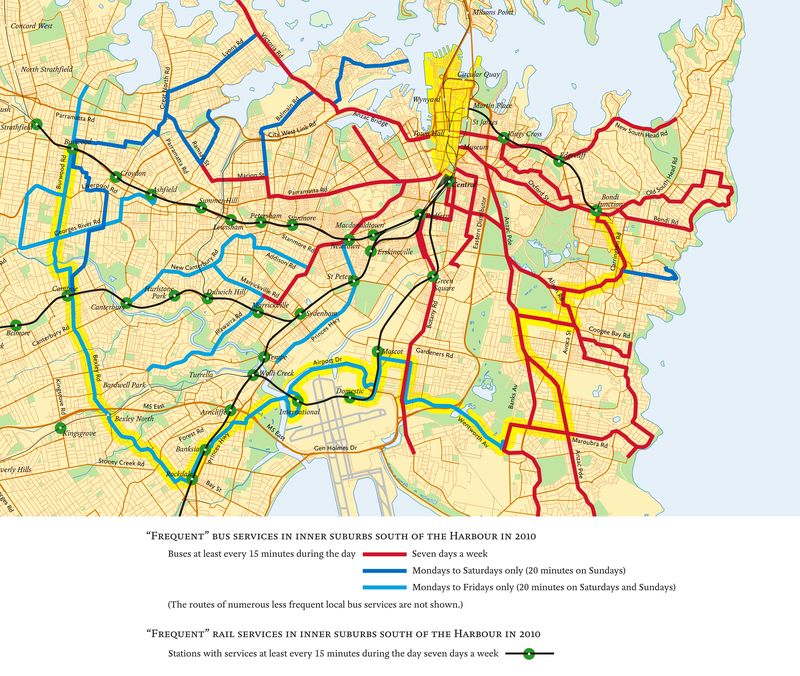 If you want to get around with any spontaneity in the inner part of Sydney — where densities are highest, obstacles to driving are greatest, and car-free lifestyles should be most attractive — the network forces you to go through the CBD (the yellow wedge on the north edge of the drawing). In the whole inner city of Sydney there is only one frequent crosstown or orbital service — one that runs perpendicular to the radial lines, like the circular element of a spider web.  It’s highlighted in yellow.  By contrast, most major North American and European cities have a whole grid of these orbital services; they are often the most productive routes in the network, in terms of ridership per unit of operating cost.

As part of the inquiry, I sketched a map to give just a taste of what an inner city frequent grid network might look like for Sydney.  It’s not a proposal, just a possible starting point for thinking about one.  But if you can’t imagine doing a grid network in a gridless city, you might find it interesting to stare at for a bit.  (All this is in the Preliminary Report of the Inquiry, in Section 4.2, and readers interested in the local detail are encouraged to dig there.) 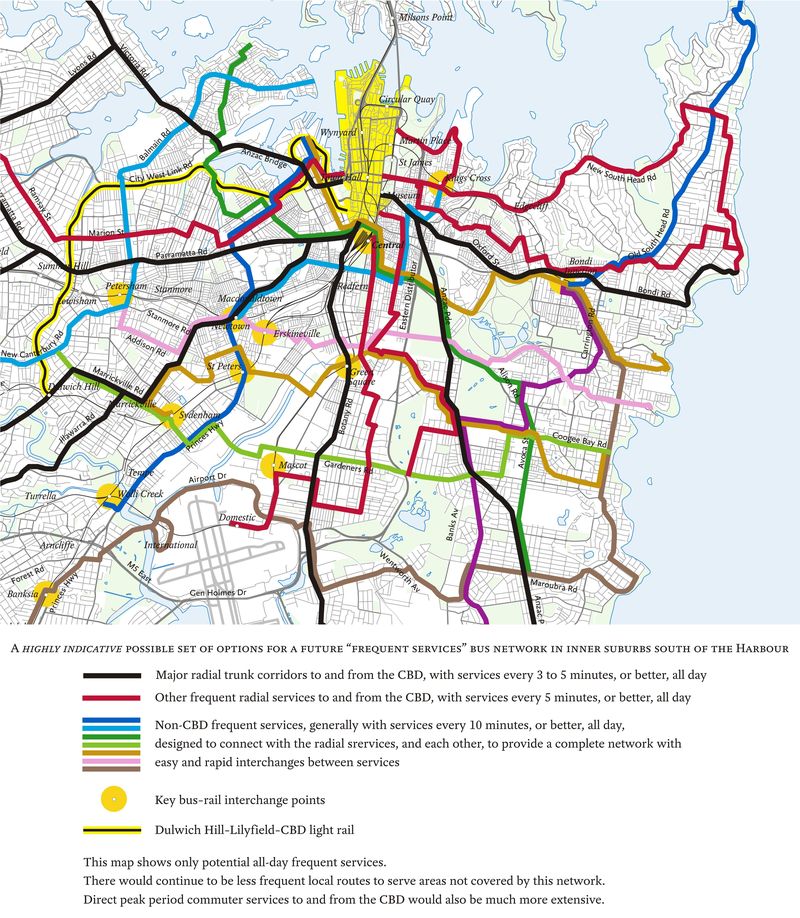 Sydney’s road network is so radial, and the CBD is such a large destination, that the grid takes more of a spider-web form (as defined here).  I highlighted this in the diagram by using black and red for radial lines and all the other colours for orbitals, so that people could see how orbital services might work and how they could all fit together, with each other and with commuter rail and light rail, to form a complete inner city network.

But in the middle part of the map you’ll notice some lines that do try to run straight east-west, even though the lacerated street network requires you to make many turns to keep going the same direction.  As I explored in more detail here, most grid networks involve a fusion of standard rectangular grid lines and spider-web (or polar grid) lines.  The rectangular lines express a “serve everywhere” impulse, while the spider-web lines express a “focus on the centre” impulse.  Network design is a process of finding the balance and making them work together.

There are many ways to design such a pattern for Sydney.  A detailed planning effort would feature months of work exploring various options, but what I sketched here, based on three years’ observation of the inner city and about three hours of focused thought, is at least a step toward visualizing the future.

So yes, your city may not be a grid.  But still, if you want a transit network that’s useful for going at high frequencies from anywhere to anywhere, the answer will be some kind of grid, built on connections, with some mix of rectangular and spider-web elements, all fitted with more or less struggle to the unique shape of your city.

You are here: Home › Sydney: Grid Networks for Gridless Cities